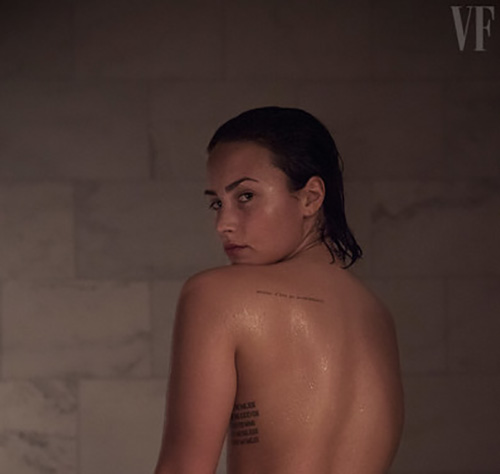 Demi Lovato’s new naked pictures are causing some serious buzz on the internet. The “Cool For The Summer” singer recently posed in a completely naked, make-up free photo shoot for Vanity Fair with photographer Patrick Ecclesine. The photos feature Demi Lovato posing in various positions in a bathtub totally nude. Demi Lovato took it all off for a good cause though – she wanted to bring awareness to the body image issues that women face, having suffered from her own eating disorder in the past.

Demi Lovato’s naked photo shoot took place in the wee hours of the morning in a New York City hotel room, afterwards Demi sat down (sans make-up) to make a quick video discussing her struggles with her own body image issues, and how “empowered” she felt doing the shoot with Patrick Ecclestine. In regards to the racy pictures, Demi Lovato explained: “The reason I decided to do this photo shoot was because when I think of confident I think of many things, but one thing in particular is feeling comfortable in your own skin. I thought there was something incredible about the idea of no makeup whatsoever, no clothes and no retouching.”

Of course, Demi Lovato also mentioned her new album “Confidence,” which also addresses her journey over the years facing addiction and eating disorders – and how she had to learn to love herself, and accept who she was. Lovato added, “In the past I suffered from eating disorders and I basically went from hating every single inch of my body to working on myself and trying to figure out ways to love myself.”

You can view the naked pictures on Vanity Fair’s official website, and see what all of the buzz is about. Do you think Demi taking it all off will be inspiring to other girls who suffer from the same issues that she has? Let us know what you think in the comments below!