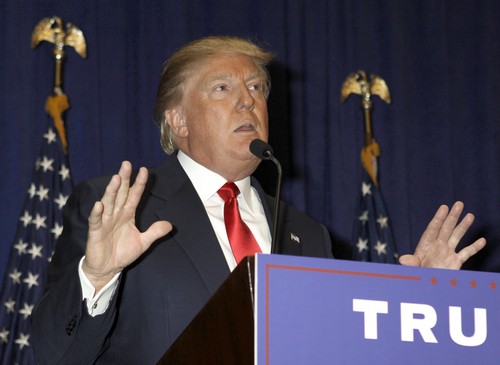 It looks like Donald Trump might not be done with reality television after all because he might be take a seat on the judge’s panel for “America’s Got Talent.” The NBC reality competition just replaced one judge by adding Simon Cowell to the panel. The other chairs are still open since none of the show’s veterans are confirmed for season 11.

“America’s Got Talent” just announced that Simon Cowell will be coming to the show as their newest judge. Simon is all set to replace Howard Stern, who announced his departure back in June. Season 10 of the popular show just wrapped so Stern is officially off the show.

As Naughty Gossip reported, Simon Cowell is listed as one of the co-creators of “America’s Got Talent” but has never actually served as a judge on the show. That’s all about to change though because “AGT” already announced that Simon will be joining the panel. What we don’t know is who will be joining him.
Howie Mandel, Mel B, and Heidi Klum have not been confirmed to be returning to the show.

At this point, we don’t know which of them, if any, are going to be judges on the upcoming season. What we do know though, is that producers want to get some American blood up on the judges’ panel.

When talking about who would make a great judge for “America’s Got Talent,” Donald Trump’s name is said to have been thrown around multiple times. The former “Celebrity Apprentice” host certainly has the chops to judge a reality competition but will NBC let him come back?

Trump got himself fired from “Celebrity Apprentice” over the summer after some controversial comments he made while announcing a bid for the presidency. Now it looks like the same network that fired the man who made “You’re fired!” famous might be taking him back.

NBC was under a lot of pressure to can Donald Trump after some of his comments upset quite a few people. Now it looks like the network might be putting Trump back on prime time. Our friends over at Naughty Gossip reported that Donald Trump may get another shot.

Another thing to consider is that Trump is currently busy running for President of the United States. He’s on course to win the Republican nomination right now and if he does, will he have time for a reality show? If he wins the election altogether, this surely can’t happen because Donald Trump would be too busy negotiating peace treaties and hosting state dinners.