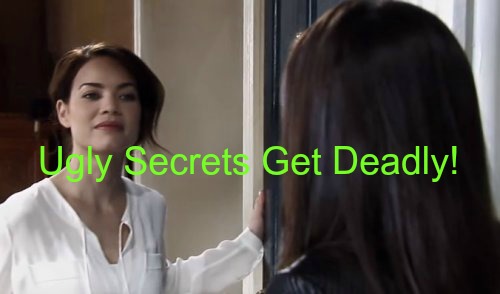 “General Hospital” (GH) spoilers video shows dramatic events for Anna, Sam and Hayden this week. All three are investigating truths they need, but what they find may put them in danger (see video below).

Sam finds out Liz has known of Jason’s identity for months but hid it from her fiancé. But it looks like Liz will beat Sam to telling Jason the truth and he’ll forgive her. Jason’s all-encompassing love for Liz will stun Sam and so will Patrick’s rejection.

Patrick will see Sam’s dogged refusal to let Jason go as a sure sign that she does not love him or want a life with him. Patrick has to protect his heart and daughter Emma Drake (Brooklyn Rae Silzer) and that means shutting Sam out of their lives.

For Anna Devane (Finola Hughes), the danger she faces will be more literal. Now that Anna has realized that Carlos Rivera (Jeffrey Vincent Parise) is not dead, she knows Paul Hornsby (Richard Burgi) cannot blackmail her. This frees Anna.

She will investigate not only how Carlos survived her shooting him but will also pry into the Sonny Corinthos (Maurice Benard) shooting. “General Hospital” spoilers tease that Anna’s life will be on the line, but who is gunning for her?

Both Carlos and Paul want Anna to stop looking into these shooting cases and her investigation may show that Carlos and Paul have been secret partners all along. We know Anna isn’t the type to back down – how far will this go?

For Hayden Barnes (Rebecca Budig), her safety and her heart are on the line. Despite that she knows Nikolas Cassadine (Tyler Christopher) is a cad, she’s falling for him. But will her affection be quelled by what she finds out this week?

Hayden will work with Curtis (Donnell Turner) to get the answers she needs about the shooting. If they find Shawn Butler’s (Sean Blakemore) bullet in the wall of the garage that means someone else was shooting at Hayden.

Finding out she was the target – not Jake Doe – will lead Hayden straight back to Nikolas to demand answers. How do you tell the woman you’re falling in love with that you tried to kill her? Laura warns Nikolas this will be ugly when it comes out.

Check out the video below and share your comments. Will Liz confess to Sam or run to Jason instead? Who threatens Anna’s life? And will Hayden make an attempt on Nikolas’ life as a revenge ploy or just help steal ELQ back from him?

Don’t miss a moment of the action-packed week on GH, then come back to CDL for more “General Hospital” spoilers, gossip and more!