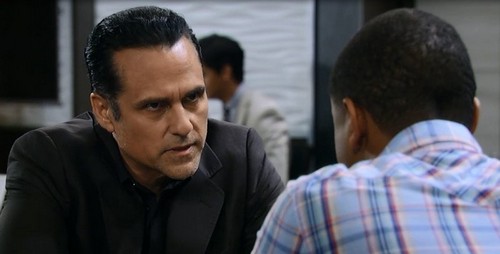 Will the GH murder trial start today? Here are some “General Hospital” spoilers to get you ready for the Wednesday, August 19 episode of the hit ABC soap. At the courthouse, Franco (Roger Howarth) asks his dad Scotty Baldwin (Kin Shriner) if he’s found a way to keep him out of Pentonville during the Silas Clay (Michael Easton) murder trial. Scotty definitely has a plan and it involves Denise DeMuccio (Maura West) and a major truth bomb that will shock all of Port Charles (but not as many as Scotty may assume).

There will be one less shocked face in the court room after Julian Jerome (William deVry) overhears Dr Liesl Obrecht (Kathleen Gati) arguing with his sister Ava. Julian will figure out that Denise is Ava – couldn’t he spot it before? And that will be another conversation. Meanwhile, Dr O isn’t happy that Ava is leaving Franco to hang out to dry. Can Liesl take down Ava?

After her bitter argument with Liesl, Ava will be forced to come clean with Julian. The good news about clearing the air is that now Ava can get Julian to help her – but Julian has problems of his own now that the guy the PCPD arrested pointed a finger at Julian as the mob boss. Julian swears his hands are clean and pleads not guilty when he’s arraigned in a Port Charles court.

Nina Clay (Michelle Stafford) is freaking out now that the trial is starting and her sweet Franco is still in jail and could be found guilty of murdering Silas. Nina stresses out and makes a call – likely to Nathan West (Ryan Paevey) – she wants to sacrifice herself for Franco but Nathan doesn’t want to let her do that. Instead, they will try and figure out who else could have done the deed.

It’s great that TJ Ashford (Tequan Richmond) made up with mom Jordan Ashford (Vinessa Antoine), but she’s still not happy that he’s living at Chez Corinthos. Molly Lansing Davis (Haley Pullos) is concerned about TJ living there with Sonny and if the mob violence doesn’t end soon, Molly may have something more to be concerned about – rumor has it that TJ might get hurt.

Sonny Corinthos (Maurice Benard) and Carly Corinthos (Laura Wright) are concerned too – but about their own kid Morgan Corinthos (Bryan Craig). Sonny and Carly try once again to have an open talk with Morgan about their concerns but he won’t hear what they’re saying. Morgan blows up and tells Carly to back off. Is Morgan bipolar like his dad?

After Julian is hauled out by the PCPD, Alexis Davis (Nancy Lee Grahn) wants to know what truth Olivia Falconeri (Lisa LoCicero) came to tell Julian. Will Olivia cave and tell Alexis the secret? She better not – we know Alexis is no good at keeping secrets. Later, Olivia talks with Dante Falconeri (Dominic Zamprogna) and he asks whether she’s going to tell Julian the truth about baby Leo.

Be sure to check back daily with CDL for more “General Hospital” spoilers and gossip!