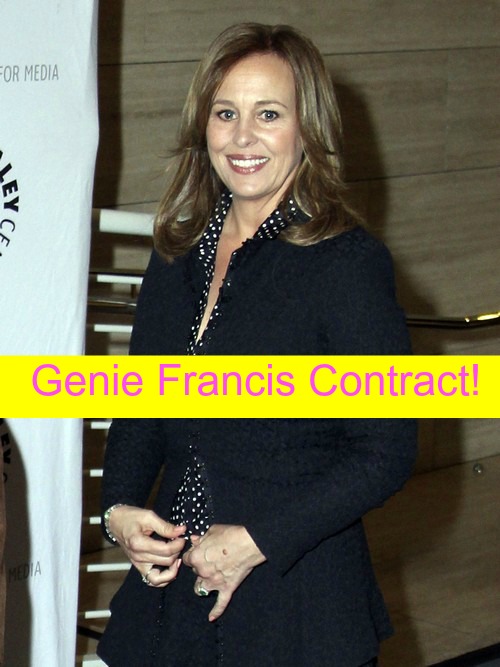 General Hospital (GH) spoilers are in; ABC executive producer, Frank Valentini announced that Genie Francis inked a lucrative three-year deal with the daytime drama. Laura Spencer, the leading lady will be hanging her hat in Port Charles for years to come. The news excited the “GH” fans because they had called for more Laura Spencer- and it looks like TPTB answered.

Genie Francis has been a part of the show for decades, and her character is an iconic character that has ties to nearly every character in some way. Frank Valentini released a statement, “We are thrilled that Genie will continue to make General Hospital her home for years to come. She is an enormously talented actress who has created a timeless character that resonates with the GH fans.”

Currently, Laura is knee deep in the Jake Doe storyline. A few weeks ago, Laura returned to Port Charles, and she asked Dr. Patrick Drake [Jason Thompson] to be her neurologist. She told him that she had a condition that needed to be monitored, and she decided to stay in Port Charles indefinitely. The news came as a shock to Sam Morgan [Kelly Monaco] but thought it was a great idea that Laura was sticking around.

Sam showed Laura out and at the door, Laura asked her if she was really happy with Patrick. Sam replied, “Yes; I do believe I am completely happy with my life right now.” Laura told her, “Okay.” She left, and Sam was left feeling uneasy about the exchange. Patrick looked at her completely confused because it was evident that Laura wanted to tell her something but withheld the news.

Laura Spencer is one of few people that know that Jake Doe is really Jason Morgan [Billy Miller]. It was thought for a while, she would blow the whistle and tell Jake and Sam. It is complicated because Sam is happy with Patrick and Jake with Elizabeth [Rebecca Herbst].

Laura urged Liz to come clean to Jake before the wedding because holding his identity from him is flat-out wrong. So far, Nurse Webber has stayed tight-lipped about the secret and shows no sign of wavering in her choice to withhold the info.

CDL would like to offer their congratulations to Genie Francis for her HUGE score with a three- year contract with “General Hospital.” Fans are on the edge of their seat waiting for what lies ahead Laura Spencer. Don’t forget to come back later for juicy “General Hospital” spoilers, news, and updates!