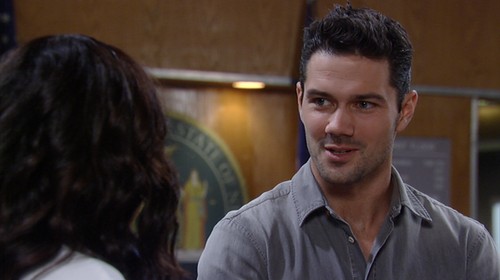 It’s cliffhanger Friday! Here’s a look at some “General Hospital” spoilers for today’s August 28 show. First, Franco (Roger Howarth) flat out tells Kiki Jerome (Morgan Corinthos) that her mom Ava Jerome (Maura West) has been sleeping with her BF Morgan Corinthos (Bryan Craig). Kiki doesn’t want to believe it, but Franco will convince her and Kiki will be devastated. When Kiki confronts Morgan, he makes a desperate bid to keep her while his mental state continues to unravel.

Morgan kicks Ava to the curb, but then he finds out too little, too late since Kiki knows what he’s been up to with Ava. Later, Sonny Corinthos (Maurice Benard) and Carly Corinthos (Laura Wright) want Morgan to see Dr Kevin Collins (Jon Robert Lindstrom) but Morgan adamantly refuses. Morgan is not ready to admit that he might be struggling with bipolar disorder that has plagued dad Sonny.

Morgan is reeling from Kiki’s anger, Ava’s betrayal and feels like his life is unravelling. Meanwhile Sonny sees a lot of himself in Morgan and wants to do right by his son even though he’s struggling with a lot of guilt over this circumstance. Morgan rejects his parents and stresses them out right when they should be focusing on their wedding.

Alexis Davis (Nancy Lee Grahn) visits new client Nina Clay (Michelle Stafford) about her murder defense. Nina reassures Alexis that there’s no way that Franco is the culprit and neither is she – Nina still thinks it was Ava. But will this be unnecessary in light of rat fink Ric Lansing’s (Rick Hearst) arrest for Silas Clay’s (Michael Easton) murder?

Julian Jerome (William deVry) has to admit to Ava that he failed to get the recording. While at the PCPD, Julian will see a familiar face. Is this someone who can help or harm him? Is it Anna Devane (Finola Hughes) back from Scotland? Or maybe it’s Kyle Sloane (Robb Derringer). Both are due back in Port Charles any day now.

Dante Falconeri (Dominic Zamprogna) and Nathan West (Ryan Paevey) have Ric in the interrogation room. Here’s the thing – do they really think Ric killed Silas – if so, likely another bad arrest by the PCPD. Can that group of clueless cops actually crack a case? Do the detecting duo suspect Madeline and are putting the heat on Ric to try and get him to give up the goods on her?

Will Nathan also take this chance to dig into Ric about taking advantage of his sister Nina? Madeline Reeves (Donna Mills) will be shocked at Ric’s arrest, but that won’t stop her schemes to get daughter Nina’s millions. Ric may not go down for Silas’s murder, but Nathan may arrest him again soon when he finds out Ric has been gaslighting Nina with Maddy’s help.

Maxie Jones (Kirsten Storms) comes with bad news for Dillon Quartermaine (Robert Palmer Watkins). Maxie’s cheap costumer pal Reeves is unavailable – does that mean Maxie will help out? Also, we may get a glimpse of people we haven’t seen in a while. Could be Jake Doe (Billy Miller) and hopefully Hayden Barnes (Rebecca Budig) as well. We haven’t seen them lately – what’s going on there?

Tune in Friday to GH then head back to CDL this weekend for “General Hospital” spoilers for next week plus tons more GH gossip and news.