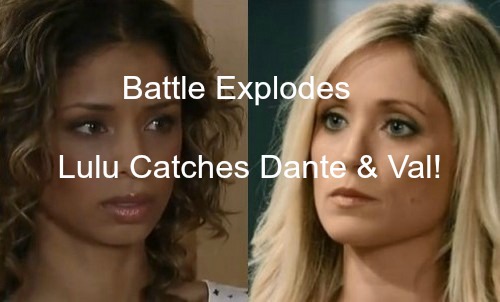 Doesn’t Dante know by now that hopping into bed with Valerie Spencer (Brytni Sarpi) is a bad idea? That’s what wrecked his marriage to start with! But he went and did it again. Sure Lulu made him think their marriage was in deep doo-doo when she served him with separation papers, but still…

Seems like Dante jumped the gun when he jumped Valerie. And of course, Valerie was right there to “comfort” Dante just like she was before. Valerie seems to have a sixth sense for when Dante is vulnerable and open to an adulterous encounter.

That’s her cousin’s man – why can’t Val just back off?

Laura Spencer (Genie Francis) just convinced Lulu to give her marriage another try and it turns out Lulu meant the separation papers as a test – that Dante failed. After sleeping on it, Lulu will call her mom Monday morning and tell her she’s going over to try and patch things up with Dante.

Too bad Dante is cuddling in bed with Valerie. Dante will tell Val he’s glad she stayed the night and they may even start up some morning action. But then Lulu shows up and all hell will break loose. Lulu will rage at Dante for hopping right into bed with Valerie and he’ll ask how long she expected him to wait.

Lulu thinks more than “one damned day” would be great. She screams at Dante and this will make him angry and defensive and the fight will get ugly. Valerie must be secretly smirking that she’s driven a deeper wedge between Dante and Lulu even if she ends up with Lulu calling her a whore again.

Also, there’s some interesting timing going on here. Dillon Quartermaine (Robert Palmer Watkins) just told his parents he’s going back to LA. Of course, he’ll stop by the Haunted Star to tell Lulu goodbye and she’ll be fresh off seeing Dante with Valerie which was so hard on her.

Before, Lulu was only imagining them together – but on Monday, she’ll see the real thing and this will leave her devastated and angry. Will Lulu take Dillon to bed this time for real? Last time when she was mad, they made it to the making out and partially undressed stage.

And that was with a cheating incident from months before. This time it’s a fresh wound and Lulu may be in this for more than revenge sex.

Will Lulu shag Dillon and then start carting him around Port Charles on her arm to show off as her rebound boyfriend? Dillon would definitely stick around for that. And Dante will be enraged that she’s bedding Dillon (even though he threw the first bone). Dante could respond by openly dating Valerie. There’s an epic battle brewing here.

Don’t miss a moment of Monday’s show to see Lulu catch Dante ‘in flagrante’ with Valerie and the fireworks that follow. And check back with CDL often for more “General Hospital” spoilers, gossip and news.