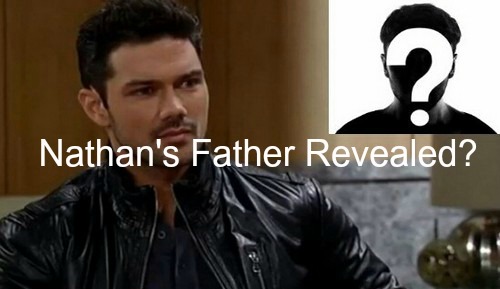 “General Hospital” (GH) spoilers hint that the father of Detective Nathan West (Ryan Paevey) may finally be revealed in 2016. Back in late 2014, we discovered that Victor Cassadine (Thaao Penghlis) was definitely not Nathan’s father although that was what Liesl Obrecht (Kathleen Gati) wanted all to think.

In fact, Liesl was so intent on keeping the secret that she murdered Victor to keep it quiet – even though she cared deeply for him. Liesl told a dying Victor, “Nathan must believe that you are his father, because the truth is far, far worse.”

Victor is pretty bad – so who could be worse than Victor? GH spoilers have swirled for quite some time that Liesl’s son Nathan is actually the grandson of Mikkos Cassadine (John Colicos). Not only is Nathan a likely Cassadine heir but the son of the worst of all of Mikkos’ offspring.

Nathan’s father has long been hinted to be Valentin Cassadine – although it has yet to be confirmed. However, Liesl has let the world believe that Victor was his father which would have made Nathan a nephew of Mikkos rather than a grandson. But we know Victor is NOT her baby daddy.

If Nathan is the son of Valentin as a result of a fling with Liesl, that makes him Nikolas’ cousin and technically a prince as well. It was enough of a shock for Nathan to find out that he was not the son of Madeline Reeves (Donna Mills) but to find out he’s a prince of darkness would be a huge stunner.

Maxie Jones (Kirsten Storms) would be thrilled, though, since she’s always had an entitled princess mentality. That would also make Nathan cousin to Sam Morgan (Kelly Monaco), Kristina Corinthos (Lexi Ainsworth) and Molly Lansing (Haley Pullos) since they are all Mikkos’ grandkids.

Being Valentin’s son would expand Nathan’s familial ties beyond just Nina Clay (Michelle Stafford). The extended family is good news, but being a Cassadine also brings with it a lot of baggage. In this case, if Nathan is the child of Valentin, he should be afraid.

If Helena Cassadine (Constance Towers) is scared of someone, that means they are nuclear bad. About six years ago, Helena told Luke Spencer (Anthony Geary), “Mikos had yet another bastard – Valentin.” She went on to say that Mikos rejected Valentin from birth and never gave him the name or any rights.

Helena added, “Valentin has been biding his time…nursing his rage… stoking his jealousy…” Helena warned Luke that Valentin would “annihilate everyone that we love.” She also tried to warn Nikolas of the same thing, but he dismissed her concerns.

Helena warned Nikolas that Valentin is “unimaginably evil.” What could be interesting in all of this is that – possibly – Nikolas may already be under Valentin’s thumb and that’s why he’s been so much darker. You never know – something or someone has been turning Nikolas evil…

Valentin was slated to be added to the GH character canvas twice in recent years. Back in 2009, Matt Borlenghi’s name was floated as Valentin’s portrayer but then showrunners decided to delay the character introduction in favor of more pressing plots involving Franco (Roger Howarth).

In fact, Borlenghi himself revealed that he taped for one day as Valentin and then the storyline was scrapped. Last year, Vincent Irizarry was mentioned as a Valentin recast (even though the character never appeared on screen).

When that rumor spread, Borlenghi tweeted: “Anyone care to comment on recasting me as Valentin Cassadine? Wasn’t enough that I got Franco’d before? Hurts.” Later he apologized for the comment and said he respected Irizarry.

No matter who steps into the role – there’s a chance we may finally get a glimpse of Valentin soon. GH spoilers hint that he could be part of the big overarching plot now coalescing – with ELQ, Paul Hornsby (Richard Burgi), the cartels, and more.

What do you think, GH fans? Is Valentin the long-lost father of Nathan? Or is there someone else not yet revealed? Might his dad be someone already around like Paul? Share your thoughts in the comments below on Obrecht’s unseen baby daddy and what this could mean for Nathan.

And be sure to check back with CDL often for more “General Hospital” spoilers, news and updates.