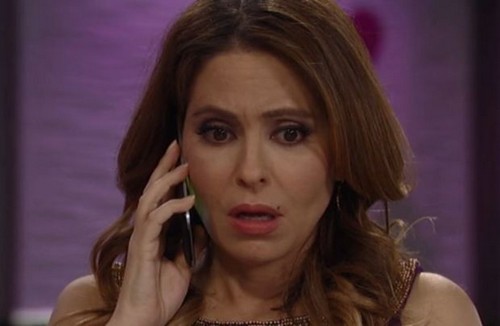 As the inevitable GH mob war threatens to break out during Sonny and Carly’s wedding General Hospital spoilers examine how Olivia will handle her perceived vulnerability. Let’s face it, Olivia Falconeri (Lisa LoCicero) is not a great secret keeper. Julian Jerome (William deVry) suspected throughout Olivia’s pregnancy that the baby was hers and her sloppy talk is what got her found out by Sam Morgan (Kelly Monaco) and resulted in Julian learning the truth. Olivia is going to have to tighten up if she wants to keep the baby Leo secret from Julian now.

Olivia was all ready to tell Julian when she thought he was out of the mob, but then Julian was arrested right in front of her and Sonny Corinthos (Maurice Benard) told Olivia flat out that he’s certain that Julian is the one ramping up for a mob war. Even if Julian isn’t hands-on in the mob violence going on right now, he may have helped the new syndicate in town get a foothold.

Not only does Olivia have to keep Julian in the dark, but she also has to keep Alexis Davis (Nancy Lee Grahn) from finding out. And Alexis is cleverer than Julian by far. If Alexis decides that Olivia is hiding something and digs into the matter, Olivia doesn’t stand a chance. But, for now, Olivia is holding Alexis and Julian both at bay while she ponders her options.

The way we see it, there’s three things she can do…

#1 Give in and let Julian know about the baby:
Olivia can always just cave and let Julian know about Leo and hope for the best. However, Olivia knows Sam and Lucas Jones (Ryan Carnes) were better off without Julian. Plus, Julian’s murderous sister Ava Jerome (Maura West) is back and Ava’s not a good influence either. There is likely no way Olivia will voluntarily tell Julian that baby Leo is alive and let him have access to the infant.

#2 Get Dante to adopt the baby:
Olivia knows she hurt Sonny by keeping Dante Falconeri (Dominic Zamprogna) from him while growing up, but she also sees the terrible price Sonny’s other kids have paid for being offspring of a mobster. Olivia could get Dante and Lulu Spencer (Emme Rylan) to adopt baby Leo and she could be around him as grandma rather than mom. Dante and Lulu would be willing, so this one is plausible.

#3 Leave the baby with Ned and Brook Lynn:
Ned Ashton (Wally Kurth) and Brook Lynn have baby Leo now and are keeping him safe, but this was only supposed to be a short-term deal. With Olivia tied to the MetroCourt and her son Dante likely to stay in Port Charles, Olivia will be torn between keeping Leo safe and staying near Dante. Olivia knows she can trust Ned with Leo and she can get away to see her son when she can. Also plausible.

So long as Olivia can keep her lips buttoned and not discuss the lie about her baby dying where eager ears could overhear, she could get away with it for a while. There are some rumors that baby Leo might get sick and she’ll need to reveal the truth to Julian to save her son. Alexis could also discover the truth if she reaches out to Ned and happens to hear a baby crying. There’s lots of ways for Julian to find out.

So what do you think? Add a comment on what you think will be the fate of baby Leo and whether Olivia will abandon him to keep him safe. And be sure to check back with CDL often for more “General Hospital” spoilers, news and gossip.