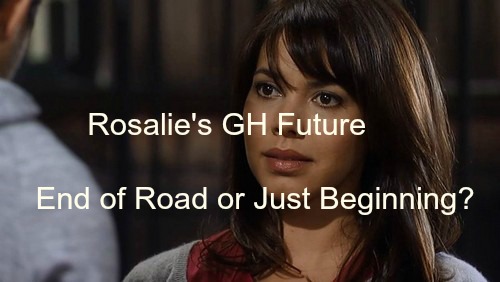 “General Hospital” (GH) spoilers tease that the storyline about Rosalie Martinez (Linda Elena Tovar) may come to a conclusion soon with a tie in to Carlos Rivera (Jeffrey Vincent Parise) – or that showrunners may abandon the plotline all together.

Which will it be? Elena Tovar has been active on Twitter in recent weeks sharing that she’s at auditions. That would indicate that she’ll be off the scene in Port Charles and moving on to other projects. But then Jeffrey Parise tweeted “Keep pushing for Carlos and Rosalie.” What does that mean?

Now that Carlos was brought back from the dead, will we see Rosalie back in Port Charles and somehow tied to the former Jerome hitman? And if she is, are both of them part of evil DA Paul Hornsby’s (Richard Burgi) foul plans for Port Charles?

Rosalie was revealed a couple of months ago as the secret spouse of Brad Cooper (Parry Shen) – half of GH’s adorable gay power couple. This shocked Lucas Jones (Ryan Carnes) but that may just be the tip of the shocking iceberg.

GH spoilers have indicated for nearly a year that Rosalie was harboring a HUGE secret and the Brad reveal was NOT it. Rosalie’s secret was so dangerous that Helena Cassadine (Constance Towers) was able to blackmail Rosalie over it.

There have also been some long-term “General Hospital” spoilers that have not yet come into play. One of them is that someone from Sonny Corinthos’ (Maurice Benard) past would deliver news of a secret. Many thought it was Lily Rivera that would tell Sonny their child survived.

That means Rosalie’s big secret could be that she’s Sonny and Lily’s child assumed dead in the car explosion. That would make Rosalie a Rivera and give her a tie to Carlos. It would also mean Carlos and Sonny would share family ties.

How would that go since Carlos was in on the plot to murder Sonny – even if he wasn’t the trigger man personally? Carlos is definitely part of the plot to take over Port Charles and push the Corinthos cartel out. Could Paul be working with the Rivera syndicate?

Rosalie being a Corinthos kid would be a secret worthy of blackmail but is it possible? After all, Rosalie showed interest in Morgan Corinthos (Bryan Craig) who would be her half-brother, so that’s 200% icky if she knew.

Plus she bedded Michael Quartermaine (Chad Duell) who at least is not related by blood to Sonny if this is true. Alternately, Rosalie could be a secret child of Carlos and some other woman. There’s enough of an age gap there to make it feasible since she was born in 1991.

Carlos and Rosalie might also be ex-spouses or even current spouses. Even though the age difference between Carlos and Rosalie would be an icky May-December thing, she’s not that much off in age from Sabrina was who born in 1986.

It would pretty convenient for Brad if Rosalie had a secret marriage to Carlos that she never broke off from the past because it would invalidate their marriage which would free him to marry Lucas. Unfortunately, it would also free Rosalie and Brad to testify against each other.

So what do you think GH fans? Are Carlos and Rosalie friends, relatives or past lovers? Do you want to see Rosalie brought back to wrap her “secret” storyline that was heavily teased for so long or would you be happy to see her out of Port Charles for good?

Share your thoughts below and check back with CDL often for more “General Hospital” spoilers, casting news and gossip.