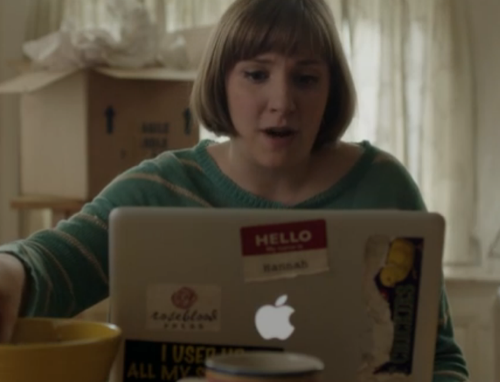 Tonight on HBO their Emmy award winning reality show, Girls premieres for an all new Sunday January 11, season 4 premiere episode called “Iowa” and we have your weekly recap and spoilers below. On tonight’s episode, after a congratulatory dinner with her parents (Becky Ann Baker, Peter Scolari), Hannah (Lena Dunham) and Adam (Adam Driver) pack up the last of her boxes and discuss “the plan” for their soon-to-be long-distance relationship. Marnie (Allison Williams) and Desi (Ebon Moss-Bachrach) perform as part of a jazz brunch for a distracted crowd at a downtown restaurant.

The show is about Hannah who has left New York to attend the prestigious Iowa Writers’ Workshop, hoping to become a more serious writer, while facing uncertainty in her relationship with Adam. Back in the city, Marnie is pursuing a music career, trying to balance her personal and professional relationship with Desi.

On tonight’s episode as per the HBO synopsis, “after a congratulatory dinner with her parents (Becky Ann Baker, Peter Scolari), Hannah (Lena Dunham) and Adam (Adam Driver) pack up the last of her boxes and discuss “the plan” for their soon-to-be long-distance relationship. Marnie (Allison Williams) and Desi (Ebon Moss-Bachrach) perform as part of a jazz brunch for a distracted crowd at a downtown restaurant. Shoshanna (Zosia Mamet) signs for her diploma with her parents (Ana Gasteyer, Anthony Edwards), who make a bigger deal out of the event than she thinks necessary. Jessa (Jemima Kirke) is confronted by Beedie’s (Louise Lasser) daughter, Rickie (Natasha Lyonne), and later seems nonplussed by Hannah’s impending departure.”

On tonight’s season 4 premiere, the show opens up with Hannah and her parents at dinner. Hannah’s parents are so proud of her they couldn’t wait for Adam to arrive at dinner to make a toast. So they had already started and where in a good mood when probably the most pessimistic boyfriend arrived for dinner. Adam and Adam talked. Thus making everyone uncomfortable and ruining the dinner.

It seems like things in Adam’s life is not turning out the way he thought it would be. He had just shot a commercial and for some reason he hates it. He doesn’t think the storytelling behind it was up to par.

So right now he has a reason to be pessimistic. Though at least he’s not stuck with his bickering parents. Shoshanna’s parents each want a copy of her diploma to show off. And while they wait, they want to throw as many insults as they can at each other.

Then there’s Jessa. She and Beedie have been doing just fine with their somewhat unhealthy relationship yet Beedie’s daughter Ricky wants to ruin all of that. Ricky doesn’t think Jessa is a good influence so she’s packing up her mother and taking her to Connecticut.

Jessa laughed it off but she was really broken up about Beedie leaving. Though not so much about Hannah. With her, Jessa appears to be indifferent and Hannah had to come out and ask her about it just so she could understand why her friend has actually been avoiding her the last couple of days.

Jessa is angry at Hannah. She’s upset at her because Hannah was the one that had convinced her to come back to New York and now it feels like Hannah is the one running away. And while she was at it, Jessa also mentioned Adam. She told Hannah that she should just break up with him already rather than leave it for later.

So, no, things hadn’t ended well between her and Jessa. Or for that matter with Marnie. But Hannah did try with the both of them!

Marnie and Desi had a show at a jazz bunch but things ended badly after some people started to ignore the singers and Marnie had felt she was being laughed at. So Marnie fled the restaurant without saying goodbye and for the longest, Hannah thought that’s how things were going to end between them.

However Marnie surprised her. Somewhere along the way (between a nervous breakdown and finding self-confidence) she got her crap together just in time to be there for Hannah when she deported what used to be their home for the last time.