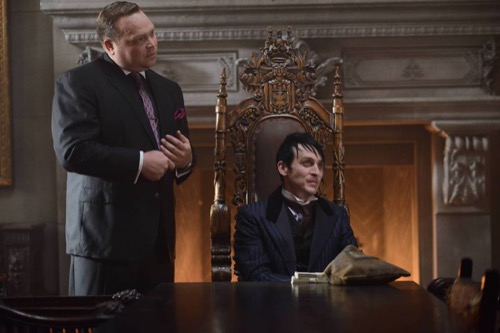 Tonight on FOX Gotham continues with an all new Monday September 28, season 2 episode 2 called, “Rise of the Villains: Knock, Knock.” and we have your weekly recap below for you. On tonight’s episode, Gordon (Ben McKenzie) investigates the inmate escape from Arkham Asylum.

On the last episode, season 2 opened with Penguin being asked for help from an unlikely source: Gordon, whose moral compass was out of whack following a shakeup in the police department. In other events, Bruce explored secrets from his father’s office; and two newcomers were befriended by inmates from Arkham. Did you watch the last episode? If you missed it, we have a full and detailed recap right here for you.

On tonight’s episode as per the FOX synopsis, “Gordon investigates the inmate escape from Arkham Asylum; Galavan plots his next move; Bruce’s quest to unlock the secrets of his father’s office leads him to an old friend of his father’s; and Nygma wants to ask Kristin Kringle on a date.”

Tonight’s episode of Gotham kicks of with the mayor being tortured – he is threatened with a tarantula and he agrees in exchange for his life to send his secretary a letter and say that he is resigning and leaving town. The next morning the front page of the newspaper is running the story. The headline screams, “Where IS Mayor James – Who Is His Mystery Lover?” Meanwhile, outside on the roof of the newspaper office, escaped prisoners who are criminally insane are throwing ship workers off the roof of the Gotham Gazette roof.

At the police headquarters, James Gordon I briefing his team on the inmates that escaped from the asylum. They still have no idea who helped them get out though. Jerome Valeska, Arnold Dobkins, Aaron Helzinger, Robert Greenwood, and Barbara Kean are all running the streets of Gotham. They have a lengthy list of crimes including rape, murder, and even cannibalism.

The prisoners (the 4 guys, not Barbara Kean) head back to Theo’s penthouse and he makes them breakfast and praises the work they did that morning – killing innocent ship workers. Theo gives them a pep-talk about presenting themselves, because they are going to be on TV and soon will be Gotham celebrities. Meanwhile, Barbara Kean whines that she is bored and wants to know when she will get a job like the other inmates. Theo tells Barbara that her time is coming, but first she has to tell Theo everything that she knows about James Gordon.

Bruce and Alfred are in the dungeon, Bruce is thrilled because he has found the key to expose Wayne Enterprises. Bruce gets the computer to start, and celebrates that they found the “smoking gun.” Before he can access anything on the computer, Alfred destroys it with a baseball bat. Bruce is devastated, Alfred was just trying to protect him – the computer would have gotten him killed. Bruce kicks Alfred out, tells him that he is fired, and to never come back.

At Theo’s house, Jerome and Greenwood are fighting with a sword and a chainsaw. Theo interrupts and tells them that they have to play Russian Roulette to determine who will be the leader of the Maniacs, after an intense couple of empty shots – Theo crowns Jerome the leader. Greenwood accepts defeat. Meanwhile, Gordon stops by the bar and asks Harvey to help them catch the maniacs. Harvey’s girlfriend Scotty won’t allow it. Before Gordon leaves – Harvey instructs him to look further in to the shipyard, there might be some helpful clues there.

The maniacs are getting ready for their next attack, they are driving an oil truck that they stole from the shipyards – and following a school bus full of teenagers. The bus pulls over and Jerome and the maniacs hop on, they have all of the teenaged girls handcuffed to their seats. Jerome is taunting them with his gun, then they douse the entire bus with gasoline. But, there is a slight problem – the lighter that they brought along won’t start. Meanwhile, Gordon and the police arrive – the maniacs all get away but Dobkins, and James manages to save the bus full of girls in the knick of time.

James handcuffs Dobkins and begins leading him to the car. He orders the maniac to tell him who freed them all from the asylum and who he is working for. Before Dobkins can give up Theo’s name, a sniper shoots him in the head and kills him. There goes Gordon’s only lead in the case.

Alfred heads to the train station to leave town, Bruce follows him. Bruce explains that he knows Alfred was just trying to protect him – but there is nothing he can do to change his mind about finding out about his father. Alfred says that he will always be on Bruce’s side, but he is playing with fire and he is on a suicide mission. Bruce begs Alfred to stay, and train him – he even promises that he will go back to school. Alfred agrees, and Bruce tells him his first job will be to repair the computer that he broke.

At the headquarters, Gordon receives a phone call from Barbara Kean. He tells her to turn herself in now and he promises to help her – he still thinks that she is a good, kind woman. Barbara laughs at him, her voice echoes and he looks up and realizes that she is in the lobby on the payphone just a few feet away from him. James chases Barbara out of the building – and then the maniacs rush in dressed as police officers and open fire. Gordon has no idea the police are under attack, he catches up to Barbara in the alley. She tells him that it is too late to talk – and then one of the maniacs jumps from the roof and attacks Gordon. Barbara watches as the maniac beats the pulp out of Gordon. She tells him to stop eventually, Barbara climbs on top of him and says she isn’t sick and then she kisses his bloody face and skips off.

Back at the police station, the maniacs are shooting and killing everyone – they take the commissioner hostage. She demands to know what they are doing all of this for. Jerome taunts that he is not crazy, he just wants to rule the world. The commissioner spits in Jerome’s face and then headbutts him while she is tied to her chair. Gordon wakes up in the alley, disoriented, and heads back to the police station. When he arrives there are dead cops everywhere and the place has been ransacked. Leslie Tompkins survived the attack, she is sifting through the rubble. They find the police commissioner, she’s been shot and is bleeding badly. The whispers to Jim that it is “a new day” and then dies.

The episode ends with Bruce in the dungeon with a tech guy from Wayne Enterprises, Alfred recruited him to help with the computer. Bruce thanks him for all his help – he reassures Bruce that he loved his father, and he wishes that he had helped him and could do more. Alfred arrives and tells Bruce about the attack at the police station- they rush to make sure that Gordon is okay. Alfred apologizes for the way he behaved and is greatful he is alive. Harvey arrives at the police station … he is coming back to work for Gotham.