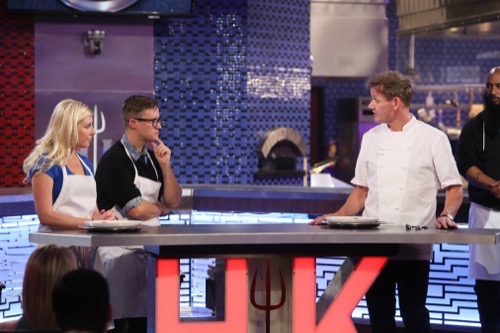 Tonight on NBC world renowned chef Gordon Ramsay’s television series Hell’s Kitchen where aspiring chefs compete returns with an all new Wednesday March 10, season 14 episode 2 called, “17 Chefs Compete,” and we have your weekly recap below. On tonight’s episode, crab cakes are prepared by the 17 remaining contestants after they retrieve the main ingredient for their dishes from the ocean. Later, seafood is a problem for one team, which leads to their early expulsion from the kitchen.

On the last episode, in the Season 14 premiere of HELL’S KITCHEN, Chef Gordon Ramsay welcomed the latest batch of 18 contestants into the kitchen. The contestants jumped right in to the challenge, after Chef Ramsay split the chefs into two teams: men (blue) vs. women (red) and asked them to present their signature dishes in front of a live audience. The winning team will earn a star-studded night with William Shatner, while the losing team prepared the dining room for the first dinner service. Later, during their first dinner service, the contestants struggle to work together, with Chef Ramsay ultimately kicking one team out of the kitchen. Did you watch the last episode? If you missed it, we have a full and detailed recap right here for you.

On tonight’s episode as per the NBC synopsis, “after a difficult opening dinner service, the remaining contestants face their next team challenge, where each team must successfully retrieve crabs from the ocean and then create crab cake dishes. The team that first completes 10 crab cakes dishes will win an exclusive trip to Scottsdale, Arizona, for a horseback riding tour and VIP dinner, while the losing team prepares the seafood for the next dinner service. Then, the dinner service begins and one team will continue to struggle with the seafood, leading Chef Ramsay to once again kick out a team from the kitchen in the middle of the dinner.”

Monique was saved on last week’s episode of “Hell’s Kitchen” but tonight we got to see how her fellow Red Team reacted to the news. And it’s safe to say that the only person that wants Monique to stay on the reality show is Monique herself.

At one point the bickering backstage got ugly. Apparently, the women were all expressing their disappointment and Monique hadn’t done herself any favors by antagonizing them. You see the chief issue the others have with Monique is that she has a bad attitude and for some reason she seems to think she’s better cook than she actually is. A remark that was proven in their eyes when she tried to cook pasta using marinara sauce from a jar. So, rather than keep their weakest link around, the other ladies can’t wait to get rid of her.

Though, luckily, the ladies were so set on winning their next challenge – no one thought of sinking Monique as part of the competition.

As part of the team challenge, the Red and Blue team each had to retrieve crabs from the ocean. Meaning, most of them had to in fact learn how to navigate a rowboat. And then they had to present 10 crab cake dishes after they shucked, sautéed, and plated them.

And while the men started out with a lead, they soon lost it when the girls managed to pick up pace.

Despite having an extra man, the Blue team ultimately lost thanks to some moving too slowly. Like Michael for instance who’s been dubbed as the weakest link on the Blue team. It seems everyone thinks he’s the slowest and overall weakest chef but they were hoping his nerves wouldn’t end up costing them the dinner service as well.

As a treat for winning the challenge, the ladies headed to Scottsdale, Arizona to go horseback riding meanwhile the guys were left in the kitchen preparing for the dinner service. And unfortunately tempers ran high when one chef, Cameron, attempted to dictate to the others. According to Cameron, he’s the best chef there so he felt it was his place to tell the others what to do. And Jake told him, in a very blunt manner, to back off!

Cameron later made amends for his actions but dinner service proved to be his down fall. Because, even though he thought he knew everything there is, Cameron kept messing on the scallops’ station. This by the way was one of the simplest tasks!

During the dinner service, the scallops were continuously getting sent back for being too raw. Apparently they were too rubbery and after Chef Ramsay noticed Cameron was looking nervous – he had even showed Cameron how to cook scallops to perfection. However, Cameron said having Ramsay in the kitchen only made him more nervous. So Brendan had to come and help him complete his first dish.

Yet as the guys finally started to pick up pace, Team Brendan and Cameron also went on to make mistakes. Like completely burning the salmon on one side and again undercooking scallops.

As for the red team, the Meat station ran into management problems. Consequently, Allison and Michelle were supposed to be working together but their constant bickering meant they weren’t communicating and were giving conflicting reports to Chef Ramsay. Though after the Blue team was thrown out of the kitchen, the ladies rallied and were able to complete their dinner service.

Thus the Blue team is the one that had to come up with two people for elimination. Their fish station was bad right from the beginning and the team as a whole was never able to recover ground.

Chef Ramsay had called them the most fragmented team he’s ever seen. And yet when they were backstage, the guys did all agree on something. They knew Cameron was going to be put up for elimination. The only other question was who was going to be standing next to him – Michael or Brendan? Yes, Brendan had his own problems in the kitchen but as overall Michael was considered the slowest.

Cameron found it to be too intimidating to cook with Ramsay around and so Ramsay decided to help with that by asking him to leave Hell’s Kitchen.
Kristine Francis