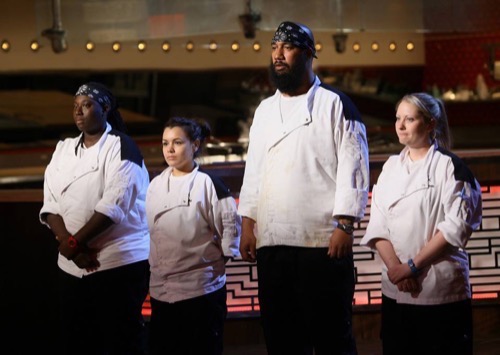 Tonight on NBC world renowned chef Gordon Ramsay’s television series Hell’s Kitchen where aspiring chefs compete returns with an all new Tuesday June 2, season 14 episode 14 called, “4 Chefs Compete,” and we have your weekly recap below! On tonight’s episode, protein is off limits when the final four chefs compete in a vegetarian challenge. Later, they receive a surprise visit from friends and family before a dinner service that determines who’s going to the finale.

On the last episode, the Top Five chefs must prepare a unique and elegant small plate dish in less than 45 minutes for diners attending a private symphony performance in HELL’S KITCHEN. The chef with the most votes won the first individual challenge and a private helicopter tour of Los Angeles, CA. Found out whose journey to become a head chef at Caesar’s Atlantic City ended and who rounded out the Top Four. Did you watch the last episode? If you missed it, we have a full and detailed recap right here for you.
‘
On tonight’s episode as per the NBC synopsis, “protein is off limits in the first-ever HELL’S KITCHEN vegetarian challenge. The chef who prepares the most stunning, mouth-watering vegetarian dish wins a trip to fabulous Newport Beach, CA, for a day of parasailing and a three-course dinner with a view at the Montage Laguna Beach. Later, the remaining chefs receive a surprising visit from friends and family, giving them a much needed boost for what will be the dinner service of their lives. Find our which chefs will make it to the Season 14 finale and whose journey will end.”

And then there was four. On last week’s episode, we said goodbye to Nick. He was fun to have around but ultimately wasn’t as consistent as others when it came to running his station. So in all fairness he was the weakest link but in no way should anyone be feeling complacent.

Chef Ramsay is still throwing spanners in the works and on tonight’s brand new episode he’s chosen to take the remaining four on a field trip. See he took them to the supermarket and even showed them all the delicious meat that was on display. But it seems that was all done to taunt to them

Because they will be given money to shop for their challenge yet the challenge in itself is to cook a vegetarian entree.

And well most of these guys have never cooked anything vegetarian. Meghan just picked up several things she knew how to cook with. T chose to a guess. Milly went with what cooks at home. Meanwhile Michelle, who was a vegetarian for a several years, chose to cook a brunch item as an entrée.

It was a complicated dish but still brunch? Even Ramsay said her dish wasn’t exactly what he asked for. He said entrée and the one person that had a step up on everyone then chose to sabotage herself. Thus the win ended up going to Meghan. And really it was about time.

Meghan had consecutively lost a good nine times in a row. And that’s why it was a good thing that she finally won but as it turns out her prize consisted of everything that she hated. She didn’t like the water and she was scared of heights. So paragliding probably wasn’t the greatest prize in the world.

Though the company she took with her helped make up for it. T kept her laughing and the ladies were able to relax without Michelle there.

Meanwhile Michelle and Milly were back at the restaurant on grunge duty. They were assigned to clean up the outside red carpet because Ramsay felt like it needed to be touched up. And then the two had to begin prepping the kitchen.

And for the most part, there weren’t any problems. Each of the contestants were all very relaxed when the returned to the kitchen for dinner service. And they had been joking around. So went from one good place to an even better one when Ramsay chose to surprise them with a visit from friends and family.

By being on the show, they’ve had to give up a lot. They haven’t been around to spend time with their kids or their boyfriend or girlfriends. And something of them really missed their parents.

Hence that visit should have boosted morale but sadly that’s not what happened later on.

Ramsay had given them another challenge for the night. At one point or another he was going to appoint them all as the chef in the kitchen. Not sous chef like last week but as the chef. So it was their job to make sure that everything that passed through the kitchen was up to par.

But to add even more of a challenge, Ramsay had Chef Andy take over each station that was left vacant during the chef try-outs and he purposely had her mess up with each chef to see if they pass the quality test.

However her station once slowed down while she was delivering beef wellingtons and on that matter Milly wasn’t that much better. Just like last time, he continuously messed up on his station and at one point Ramsay asked him if he was intentionally sabotaging Meghan chances at running the kitchen. Thus, all knew he would be up on the chopping block but the real question was who else.

The chefs completed a successful dinner service yet there was only room for two out of the four.

Apparently, before he came to his decision, Ramsay chose to look at everyone’s body of work instead of the last hours of dinner service. And what he saw is that Michelle is still young and in need of some experience. She’s 22 and has years left. But he needed someone ready now and eventually he felt T would be a better fit.

T has been chosen to go up against Meghan in next week’s finals. And with them both being strong competitors, it’s any one’s guess on who will win!