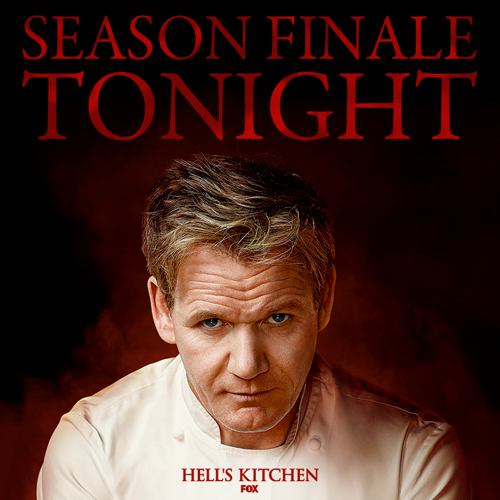 Tonight on NBC world renowned chef Gordon Ramsay’s television series Hell’s Kitchen where aspiring chefs compete returns with an all new Tuesday June 2, season 14 finale called, “Winner Chosen,” and we have your weekly recap below. On tonight’s episode, the two finalists visit Season 10 winner Christina Wilson in Las Vegas before they are given the task of preparing five unique dishes to be judged by five world-renowned chefs. In the end, one final dinner service determines the winner of Season 14.

On the last episode, protein was off limits in the first-ever HELL’S KITCHEN vegetarian challenge. The chef who prepared the most stunning, mouth-watering vegetarian dish won a trip to fabulous Newport Beach, CA, for a day of parasailing and a three-course dinner with a view at the Montage Laguna Beach. Later, the remaining chefs received a surprising visit from friends and family, giving them a much needed boost for what would be the dinner service of their lives. Find out which chefs made it to the Season 14 finale and whose journey ended. Did you watch the last episode? If you missed it, we have a full and detailed recap right here for you.

On tonight’s episode as per the NBC synopsis, “after a quick trip to Las Vegas to visit Season 10 winner Christina Wilson for some culinary motivation, the final two chefs return to Los Angeles where Chef Ramsay has set the stage for the final challenge. The top two will prepare five unique dishes to be judged by five of the most world renowned chefs. Then, in the most important dinner service of their lives, the top two will face off in epic battle for the final dinner service.”

Step aside gentlemen because tonight is ladies night. On the season finale of “Hell’s Kitchen”, it’s now down to T and Meghan. Both strong competitors and consistently great chefs throughout the competition. However to win Hell’s Kitchen these ladies have to do more than plate a dish. They also have to know how to lead.

The position of Head Chef at Caesars Palace in Las Vegas and a check for a quarter of a million dollars is unfortunately not for everyone. It’s for actual winners that have proven themselves.

And that’s why Chef Ramsay introduced them to someone he believed could help them in the journey ahead – season 10 winner Christina Wilson. The ladies and Christina all board a plane for a day of relaxation in Vegas and Christina took the ladies out on their first night in town there. She wanted to tell them about the things she herself learned as a competitor on Hell’s Kitchen.

Plus she wanted to make sure they weren’t building things up in their heading and worrying themselves unconditionally.

She said the last challenge is not about the time crunch. It’s about quality. Every dish they make from now on out has to be perfect. And consistent.

That’s what proves to the judges they have talent.

And it seems her warning couldn’t have come at a better time. Because the second the came off the plane, they were told they would be going to Ramsay’s house when it fact they were heading to a challenge. Ramsay had set up a cook off with friends and family watching.

Though if that wasn’t unnerving enough, the two chefs also found out who was going to be judging their dishes. Celebrity chefs Anna Kelly, Hubert Keller, Nancy Silverton, Nancy Oakes, Wolfgang Puck had all came out after Ramsay called them. And with kitchens of their own, the ladies knew that there couldn’t be a single mistake.

Yet, sadly, Meghan did the one thing she was warned against. She worried herself and then tried to go big with her dishes. So although some of her work ended up giving her great scores – T’s dishes that were a lot simpler was what won over the judges.

And so the first challenge went to T.

But Meghan did have a chance to redeem herself during the dinner service. Both she and T were going to be put in charge of their own kitchen.

Meghan had the Blue kitchen and T had the Red one. Though service was more or less the same. Both kitchens would have to serve a VIP table and a selection of their own family members.

The one difference was their menu. Each chef had to create a unique menu that would please their diners. So of course Meghan went with something a little on the fancier side. And T chose to be creative but also create dishes that were more doable for her team.

Basically a spin on the same strategy they used for the first challenge though this time the results turned out to be different.

In the Blue kitchen, Meghan pushed for perfection. Even from Michelle who is generally known as one of the best cooks. So from the very beginning that caused some tension. Michelle didn’t feel like she needed to be ridden yet Meghan wasn’t going to accept her “scraps”. Thus Meghan chose to lead her kitchen with an iron fist.

Though, over in the Red kitchen, T had a bigger problems on her hands. However being nice wasn’t getting her anywhere.

The chefs, she chose to work with, simply were not panning out. Adam kept giving her raw meat to serve and so T eventually had enough and placed him on Garnish. And yet Adam didn’t do so well on Garnish either.

So Nick, who had taken over for Adam on his former Meat station, then had to bail him out on Garnish as well. As for T, she tried to come up with a plan to combat all the mistakes but rotating her chefs didn’t seem to help. For when it’s not Adam then it was Christine. Christine messed up on Garnish and before that on salads so at one point T lost all faith in her.

T to her credit never showed or expressed how disappointed she was but, despite that, if she had to do it all over again then she would still pick Christine to be on her team over Randy.

During selection, T didn’t want to choose Randy because she knew he would sink her. So she chose to have Christine and left Randy to Meghan. And it looks she was right about Randy. Back in the Blue kitchen, Meghan had to kick him off of Meat after he made one too many mistakes. He was handing her raw pieces of meat and, during the struggle to regather himself, he actually appeared to be confused when asked to reheat it.

And although Randy truly proved himself to be an obstacle, at least it was just hm. So Meghan’s kitchen was delivering dishes faster than T’s.

But like Christina said earlier, it’s not about the time. It’s about the quality. And after dinner service wrapped up – Ramsay had to come to a decision based on everything.

And he chose Meghan.

Ramsay believed Meghan would do a better job in Vegas so Meghan is now the winner of Hell’s Kitchen Season 14! Guess he must have wrote off the first challenge as a fluke.