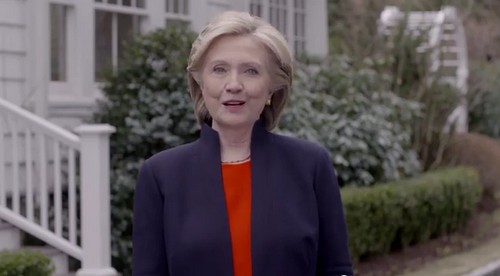 Former US Secretary of State Hillary Clinton has officially announced that she is, once again, running for President of the United States of America. She looks to become the first female to occupy the presidential seat, making history.

Clinton made the announcement public on Sunday April, 12 in a video embedded on her website, and featured above. The main theme in her video, is her ambition to bring economic equality to the people of the United States.

In the video she says, “Everyday American’s need a champion, and I want to be that champion. So, you can do more than just get by, you can get ahead. And stay ahead. Because when families are strong, America is strong. So I’m hitting the road to earn your vote, because it’s your time, and I hope you’ll join me on this journey.”

On Friday, April 10, Huffington Post released a new epilogue to Clinton’s memoir, Hard Choices. In part it read, “I’m more convinced than ever that our future in the 21st century depends on our ability to ensure that a child born in the hills of Appalachia or the Mississippi Delta or the Rio Grande Valley grows up with the same shot at success that Charlotte will… Becoming a grandmother has made me think deeply about the responsibility we all share as stewards of the world we inherit and will one day pass on. Rather than make me want to slow down, it has spurred me to speed up.”

President Barack Obama was asked what he thought of Hillary Clinton and he responded by saying, “She was an outstanding secretary of state. She is my friend. I think she would be an excellent president.”

Clinton will now spend her time working on her campaign, and planning how she will earn the necessary votes to win the ticket at the Democratic convention. She will be traveling Iowa and New Hampshire soon to meet with voters, and to begin convincing them that she is the right choice for our President.

What do you think? Will Hillary Clinton win the Presidential election on November 8, 2016, or is she in over her head again?