House of Lies Recap – Jeannie Gets Gas: Season 4 Episode 9 “We’re Going to Build a Mothership and Rule the Universe” 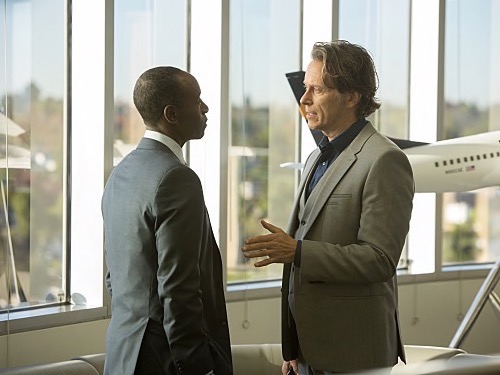 On Showtime House of Lies returns with a another great episode Sunday March 15 season 4 episode 9 called “We’re Going to Build a Mothership and Rule the Universe,” and we have your weekly recap below. On tonight’s episode, Jeannie [Kristen Bell] gets an invite to the Kaan home. Clyde [Ben Schwartz] reaches a breaking point.

On the last episode, Marty and Jeannie enticed Denna with a retaliatory business moved against Ellis. Meanwhile, things got complicated between Doug and Kelsey; and Clyde spent time with his father and was disturbed to see how similar they may be. Did you watch the last episode? If you missed it, we have a full and detailed recap right here for you.

On tonight’s episode as per the Showtime synopsis, “Marty and an artist sent by Denna butt heads; Jeannie has mixed feelings about a dinner invitation.”

#HouseOfLies starts with Marty watching Roscoe doing skate boarding tricks. Marty says K&A’s economic health is restored thanks to his rich f-k buddy. He talks about how they’re scooping up companies, disemboweling them and filling their coffers. He applauds Roscoe’s sweet moves and says he has to get to school. Jeannie is there and says he should quit school and train for the X Games. He asks her to talk sense to Marty about not tearing down the half pipe.

Roscoe mentions that Jeremiah invited Jeannie over for a family dinner and says Uncle Malcolm is coming too. Marty is not pleased and tells Roscoe he’s got to get to school. Roscoe asks about Jeannie’s baby and she says it’s a girl and gives Marty a look as she says this. Roscoe hugs her and she says she’ll see him tonight. Clyde shows Marty and Jeannie that Doug is asleep on the couch in his office. Marty gets a Sharpie and draws cat whiskers on his face. Doug wakes.

They admire his snuggly man jammies. Jeannie asks if it’s a plushie thing. Doug says it’s not entirely sexual. He says he was working late on a presentation and decided to slip into something more comfortable. He says he’s rolling out the red carpet for Zobel, the turnaround artist that Denna hired. They all call him pussy and Clyde waggles his keys at him. He has no clue what they’ve done to him. Ron Zobel shows up with his people.

He says Marty needs to go by Martin since it’s stronger. He refuses to introduce his team and says it will keep the data “purer.” Hans looks around the office and says it looks like dead business. Marty says they’re rebuilding. Ron says Marty is defending his old ways which weren’t working and says the two of them will do something spectacular. Ron says he hears a sound. He says it’s the sound of printing money.

Ron tells Marty to say that he hears it and hassles him until he gives in and says it. They do a presentation for Ron who is on his phone texting. He tells them to go on. Jeannie talks about their aggressive second wave. Clyde says they’re targeting companies in emerging technologies. They hear a noise from Ron’s phone and realize he’s not texting, he’s playing a game. Marty says the plan is to take over the universe. Ron says if they could do that, he wouldn’t be there.

Jeannie asks Ron if he has strategies to enhance their buy out strategy, that’s great. Ron says it’s too early for strategy and Marty reminds him it’s a strategy meeting. Ron says they’ll take all this under advisement. Ron says they need to look under the hood to decide what’s the best strategy. He says they’ll set up a war room and let them know. Jeannie comes to Marty’s office and he calls her Jeanine like Ron did. She says she’s worried what they’re deciding about them.

She says Denna can do whatever she wants since she bought 60% of the firm. Jeannie tells him to check in with Denna and get this shit under control. Jeannie says she’s going to call Jeremiah and cancel but Marty says she can’t. He says they’ll blame him if she doesn’t show. She says okay. Clyde and Doug say that it’s more fun when they’re on the other side of the equation. Ron tells Marty they’re ready to talk but Marty says they’re off to SkyEast. Ron insists on going along.

Derek from SkyEast rants about the segment models and says they’re opaque. Marty says they’re clear to him. Derek rants and says they need to start explaining this shit in terms real people can understand. Derek is called out for a moment. Marty says the guy is losing his shit and asks where Jeannie is. Doug asks if the mutes (Ron and his people) are going to be shadowing them at all meetings because they’re creepy. Marty tells Doug to go find Jeannie.

Ron pulls Marty outside to talk. Doug finds Jeannie downstairs and she says she feels weird. He asks I the baby is coming but she says it’s just a little pain. Doug says she’s getting sick because she’s supposed to have dinner with Marty’s family. She has a pain and Doug yells out that she’s having a miscarriage. She tells him to go get her some water. Ron says Marty isn’t handling his client appropriately. He says the client is always right and Marty says Derek is a panicky little bitch.

Marty says this is not a pitch and Ron reminds him that he’s turned around 29 companies. Marty says he can run the meeting if he wants to and Ron says he could run the shit out of it. Ron says he’s there to maximize his profits and says he has his balls in his hands and he needs to listen to his wisdom or he’ll crush his balls. He asks if Marty hears him and he says yes. Doug asks Jeannie how it will work with her, Marty and the baby. Jeannie says to mind his business. She has another pain.

Jeannie has more pain and he says he wants to get Marty but she says she doesn’t need Marty. Doug tries to help and she lets out a massive like 60 second fart and says she feels so much better. Doug, however, can’t breathe. She says let’s go finish the consult. Now Doug feels sick. Derek is looking for answers and Marty refers the question to Ron. He introduces Ron as a colleague and says he’s turned around many Fortune 500 companies.

Marty says it’s a mid-level regional airline looking to expand. Ron says it depends on the growth metrics they’re measuring. Marty hands over the data for him to look at. Ron says he needs to study the specs. Ron is clueless. Marty asks if Ron knows dick about management consulting. Ron calls Marty an asshole and says he’ll crush his balls. He walks out and leaves the mutes. Marty mocks them and says in a robotic voice that their gears are breaking down.

Jeannie comes in and Derek says Marty freaked him out. Jeannie sits and says she has an implementation for him that will make him fall even deeper in love with her. He says that’s not possible and is excited. Clyde comes in annoyed that his dad Harvey let the cat Natalie Portman into his room. His dad says Natalie likes his bed and Clyde rants about cat dander. Harvey says he needs some help with the computer and Clyde sees lotion and tissue and realizes his dad was whacking it.

Denna says he will make Marty a ton of money. Marty says he doesn’t need someone looking over his shoulder. She says they talked about making K&A huge and says Ron is a genius at building companies. Denna reminds Marty he gave half his company to Jeannie who then sent him to prison. Denna says business is business and asks if he wants to say f-k you to her turnaround artist or make some f-ing money. She asks him what he wants most and what it’s worth.

At dinner, Jeremiah asks Jeannie when she’s due and she says three weeks. She says she’s almost here and Malcolm says he’s going to be an uncle again. Roscoe offers a toast to Jeannie and his new baby sister – may she grow and flourish and be loved. Jeannie says having Roscoe as a big bro, she’ll always look fab. She says Roscoe will be a great big bro/sis and Roscoe says he likes that but it made Marty have an aneurysm. Jeremiah toasts happiness to Jeannie and Marty however that looks.

Jeremiah says they will love the baby completely and unconditionally. Roscoe says that’s beautiful and they all toast. Jeannie is looking very uncomfortable. She says those are nice words for the woman that blew up their lives. She’s teary and says it’s delicious but she needs to go because she has a work thing. She thanks Jeremiah for the hospitality. Marty follows her out and asks where she’s going. She says she can’t do this with her family.

She says them being nice to her makes her hate herself more. Marty says it’s time they stopped acting out towards each other. He says they’re going to keep their shit together in front of their kid and says they can do that. He says they just need to be grown ups and she can’t walk away any time she feels something. She asks if that was Marty Kaan that just said that but he says he means it. She gets a pain and puts Marty’s hand on her stomach to feel the baby kicking.

Marty asks her to stay. Jeannie relents and goes back in. She says she made an excuse for her work thing and asks what’s for dessert. Jeremiah has blackberry cobbler and Roscoe jokes that the blacker the berry, the sweeter the juice. Jeremiah asks how big a slice she wants and she says he doesn’t have a piece big enough. He cuts her a huge slice of pie.