How to Get Away With Murder Recap Winter Premiere: Season 1 Episode 10 “Hello Raskolnikov” 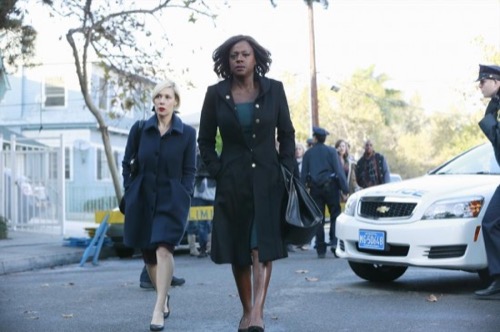 Tonight on ABC their gripping new drama How to Get Away with Murder starring Viola Davis continues with an all new Thursday January 29, season 1 episode 10 Winter Premiere called, “Hello Raskolnikov” and we have your weekly recap below. On tonight’s episode, the day after Sam’s murder finds Annalise’s students joining the search for her missing husband, but a surprise visitor in town could complicate their efforts to keep their story under wraps.

On the last episode, it’s the evening of the bonfire and we finally got see what exactly happened on the night of Sam’s death, on the fall finale. Did you watch the last episode? If you missed it, we have a full and detailed recap right here for you.

On tonight’s episode per say the ABC synopsis “it’s the day after Sam’s murder and the students are called in to help Annalise find her missing husband, but just how much does Annalise know? And when a surprise visitor shows up in town, getting away with this murder might not be as easy as the students had hoped.”

Tonight’s episode is going to be great, which you won’t want to miss. So be sure to tune in for our live coverage of ABC’s How to Get Away with Murder season 1 episode 10— tonight at 10PM EST! While you wait for our recap, hit the comments and let us know how excited you are about this new series.

Tonight’s episode of How To Get Away With Murder kicks off with Annalise at the police station – the DA is questioning her about Lila’s murder, and whether her husband Sam killed her. Annalise explains that she could tell by the way Sam freaked out about the DNA test that he was responsible for Lila’s death – and she explains that Sam confessed to having an affair with Lila. Annalise tells the police that she thinks he skipped town because he knew she was going to turn him in. She neglects to tell them that Sam is dead – and her law students killed him and burned his body.

Annalise leaves the police station and bumps in to Nate – she confesses that she told the police she was at his house, he reassures her that it is going to be okay. Meanwhile, Annalise’s students are pacing in front of her house waiting to be interviewed by the police. Annalise calls Wes in to her office and warns him that they all look paranoid, Wes begs Annalise to let him tell them the truth and that it was her idea to burn the body. Annalise tells him that is not an option – and to stay strong through the interviews so that they can prove Rebecca is innocent and get the charges dropped against her. Wes gives Annalise Sam’s ring, and says he saved it before they burnt the body because he thought that she would want it.

Annalise is interrupted by the prosecutor dropping in, she accuses Annalise of creating this entire farce to get Rebecca off scot-free. Annalise kicks her out, and she sneers that she will see her in court. Now it is time for Wes and the other law students to be interviewed by the police, Wes is up first and says that the last time he saw Sam was two days ago – and he never really paid much attention to him. He rats himself out and tells the police that he is dating their client Rebecca. Meanwhile, Annalise meets with Rebecca and apologizes to her for not believing her about Sam. Annalise promises Rebecca that she is going to get the murder charges against her dropped.

Asher is panicking, and thinks that he is going to be in trouble with the police because he stopped by Annalise’s house last night, he has no idea that they killed Sam. Annalise tells her students that they have work to do – they need to prove that Sam killed Lila so that they can get the murder charges against their client Rebecca dropped. They get to work gathering DNA evidence and trying to prove that Sam was on top of the roof the night that Lila was killed. Asher and Bonnie head to the police station to get Sam’s laptop back so that they can see if Sam backed his phone up to it. The police refuse to give them the computer because DA Parks gave them strict orders not to.

Rebecca gives them a tip – she says that the week that Lila was killed she went to an abortion clinic because Sam was pressuring her to get rid of the baby. Annalise heads to court and requests for Lila’s medical records to be released from the clinic – the judge shuts her down and refuses to get the order. Later that night, Ananalise meets up with Nate. He says he has to ask her if she knows anything about where Sam went – she reassures him that Sam is the monster, not her, and she has no idea where he went.
Connor corners Michaela and tries to get her to go to the police station with him and explain everything that has happened. Connor reminds her that Wes and Rebecca were the ones that killed Sam, and they were just in the wrong place at the wrong time and were bullied in to helping them cover up the crime and burning the body.

Annalise finally convinces the judge to let her view the security tape footage from the abortion clinic, but not Lila’s private medical records. Frank stops Annalise outside of the court house and reveals that he has the DNA test results. She opens it and realizes that Sam is the father. Frank is confused, he says “What the hell Ananlise? No one is this happy to find out that their husband knocked up a dead girl.” He begs her to tell him what is really going on – she agrees to tell him the truth, but orders him to never tell Bonnie. They get the security footage back from the abortion clinic – and they find Lila and Sam both in the waiting room and arguing.

Annalise heads to court and calls a nurse from the clinic up on the witness stand – she confirms that Sam wanted Lila to get an abortion and she didn’t want to go through with it. Annalise submits the DNA test as well – and DA Parks tries to fight her on it. The judge orders Parks to turn over Sam’s laptop so that it can be analyzed and used to determine by its GPS tracker if Sam was on the roof the night that Lila was murdered.

Michaela is interviewed by the police, and she keeps her story straight, she says that she went to the bonfire with her friends the night that Sam left town. Michaela panics afterwards and runs and tells Connor that she thinks the cops know they are hiding something. Connor tells her that the only way they can go to the police is if they get Laurel to go with them. Meanwhile, Frank stops Laurel in the hallway and tells her that she is a hypocrite and he knows that she lied. Laurel heads back in to class and Connor and Michaela stop her, Connor tells Laurel that she has to go to the police with the or else they will pin Sam’s murder on her.

Annalise heads back to court and they have the data from Sam’s laptop. They track him and prove that he went to New Haven, and then a coffee shop in Philadephia, then he traveled to the sorority house where Lila was killed and stayed there for three hours – coincidentally the same time period that Lila was murdered. The judge drops all of the charges against Rebecca, and she is a free woman. Annalise heads to the bathroom and hyperventilates, she catches two women talking about how heartless she is.

Connor and Michaela try to convince Laurel to go to the police with them and confess – Laurel caves and agrees to go with them. She tells them that she “is in.” The three of them drive to the police station later that night, when they arrive Wes and Annalise are waiting for them. Connor and Michaela realize that Laurel sold them out. Annalise tells them that she knows what really happened to Sam – and they have to trust her. Annalise comforts Connor and tells him that she doesn’t blame them for Sam’s death, she promises them that if they listen to her – they will get away with Sam’s murder.

Annalise heads home and goes to bed, and then receives a phone call revealing that Sam’s sister is in town – and she told the cops that Annalise is lying and Sam didn’t murder Lila.