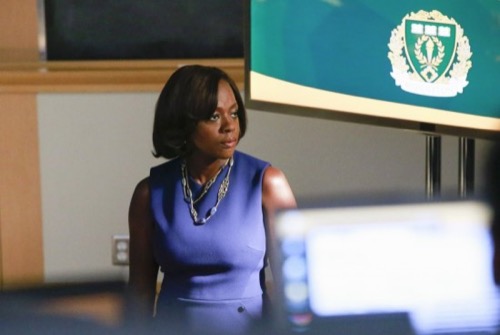 Tonight on ABC their gripping new drama How to Get Away with Murder starring Viola Davis continues with an all new Thursday September 24, season 2 premiere recap called, “It’s Time to Move On” and we have your weekly recap below. On tonight’s episode, Rebecca’s disappearance has the students reeling in the Season 2 premiere, but only Annalise (Viola Davis) and Frank (Charlie Weber) know that she was murdered, and they vow to find out who did it.

On the last episode, in the two-part Season 1 finale, Annalise defended a priest who’s accused of killing a colleague; Connor and Oliver explored a new level in their relationship; and Wes and Rebecca continued to lose faith in one another. In the second hour, Wes, Connor, Michaela and Laurel may be in too much trouble for Annalise to rescue them; and the truth about Lila’s murder was revealed. Did you watch the last episode? If you missed it, we have a full and detailed recap right here for you.

On tonight’s episode per say the ABC synopsis “Rebecca’s disappearance has the students reeling in the Season 2 premiere, but only Annalise and Frank know that she was murdered, and they vow to find out who did it. Meanwhile, Annalise defends a brother and sister accused of killing their parents; and an old friend of Annalise’s surprises her at home and teaches her an important lesson.”

Tonight’s episode is going to be great, which you won’t want to miss. So be sure to tune in for our live coverage of ABC’s How to Get Away with Murder season 2 premiere — tonight at 10PM EST! While you wait for our recap, hit the comments and let us know how excited you are about this new series.

10 days had passed since that unfortunate night at the Keating household and it seems like everyone is falling apart.

Not long after Rebecca’s murder/ disappearance, Professor Annalise Keating had told everyone to act normally and that if they couldn’t do that then stay under the radar. And truthfully that wasn’t asking for much. All that was actually required of her students was for them to show up to class and not make any rash or big decisions. Meaning don’t be stupid and do anything that would make yourself look guilty. Yet her golden boy Wes appeared to have been the first to have blatantly ignored her orders.

Wes, as you might recall, had grown particularly close to Annalise over the first season. Some of the others had even remarked that he was sort of like her son seeing as she doted on him so much. But on tonight’s episode of “How to Get Away With Murder” there’s something suddenly off with their relationship.

Wes was snapping at her during class and that was after he had already shown up late. And later back at the house it was clear that he could barely stand to be in the same room as the others. So Frank thought that was a sign of the young man’s guilt.

Last season finale ended with him and Annalise finding Rebecca’s body yet both confessed to being innocent of her murder. So in way they’re equally invested in finding out who really killed her. Because whoever did – that was the person they were left to clean up after.

After all someone had to remove Rebecca’s body from the premises.

But the return of an old face from Annalise’s past has made her a tad reluctant on finding out the truth. Rothwell was apparently a friend of hers and it was Eve’s number that she had given to Nate. Only when Nate eventually called her, Rothwell felt she needed to speak with Annalise first in order to see why it was so important to defend him.

Old college friend or not, Nate’s case looked back. And Annalise giving him her number had also made it look like they really did kill her husband together. However Annalise denied it and Rothwell had at first believed her.

Though the doubts did come when she met Nate in person. See, Nate told his lawyer that it was Annalise that set him to begin with and when Annalise didn’t deny it – her friend realized she couldn’t take on the case.

Annalise tried to plead with her but it was too late. Once her friend saw how far Annalise was willing to go to manipulate others – it was confirmation that she hadn’t changed all that much since Harvard.

And as for Frank’s little idea about Wes being the guilty party, Annalise agreed to test the young man and he passed. He still thought Rebecca was missing and the reason he developed an attitude was because he thought Rebecca had believed him. He had told her he didn’t think she killed Lila and he had been hoping they could both get over what happened with Sam – together.

Yet someone killed her. And if it wasn’t Wes then it had to be someone else in the house. So Frank then wondered about Laurel. Laurel you see had been the one to ask him if he could take care of Rebecca if their false trial went south.

And trial was a bust. So Frank had good reason to suspect her seeing as she most likely would have done the job herself once she saw that she couldn’t talk someone else into doing it. But, as it turns out, Annalise has had her suspicions about what really happened that night and all she needed was for Bonnie to admit to what she did.

Bonnie was and is a very disturbed young woman. She killed Rebecca because Rebecca tarnished her belief about Sam. Sam apparently had to remain a good man in her eyes. Someone who would never hurt another person much less a woman. So she killed Rebecca in order to preserve the memory of a dead man.

And Annalise called her monster for it.

She saw through all of Bonnie’s explanations and knew that Sam had been her actual motive. So she went to the only person she felt she could talk to – she went to Eve Rothwell’s. It seems they were lovers in college and Annalise had left her for Sam who was her therapist at the time.

So when Annalise went to that apartment, she didn’t go there for advice. She merely needed someone to hold her. And in the morning her friend was perfectly happy to take Nate’s case.

Although the ADA on Nate’s case has secretly been using Asher to spy on Annalise. So having an ex-flame become Nate’s lawyer is just not good optics. It makes it look like all three are colluding together.

But fast-forward 2 months and the audience was shown that someone shot Annalise. So who or what caused that happened?

Will it because Annalise took on a case involving adopting children allegedly killing their own parents? Or will we finally see who it was that Rebecca had texted 911 to on the day she was murdered and will he or she turn out to be our shooter?