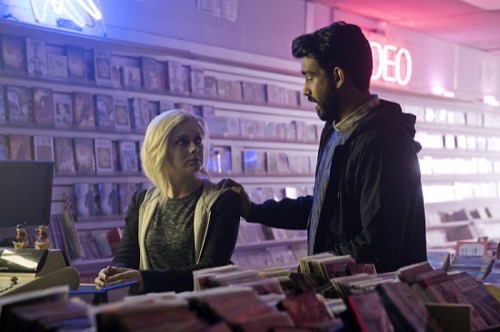 Tonight on the CW iZombie airs with an all new Tuesday April 7, season 1 episode 4 called “Liv and Let Clive,” and we have your weekly recap below. On tonight’s episode, Clive discovers a John Doe in the morgue is one of his former criminal contacts from his days working on the vice squad, but he refuses Liv’s help to solve the murder. Liv and Ravi investigate on their own, which puts them in a precarious situation. Meanwhile, Major searches for a roommate, and Liv thinks he is considering a cute co-ed.

On the last episode, as Liv (Rose McIver) and Detective Babineaux (Malcolm Goodwin) investigated a hit and run case, they discovered the victim was a sociopathic hit man responsible for the murder of a tech entrepreneur, a case that Peyton (Aly Michalka) was prosecuting. Liv and Ravi (Rahul Kohli) dug deeper into a supposed zombie sighting that was posted on line which lead Liv to make a surprising discovery about someone from her past. Major (Robert Buckley) moved on with his life and Peyton was shocked by Liv’s reaction. Did you watch the last episode? If you missed it, we have a full and detailed recap right here for you.

On tonight’s episode as per the CW synopsis, “when Clive (Malcolm Goodwin) identifies a John Doe in the morgue as one of his former criminal contacts from his days on the vice squad, Liv (Rose McIver) is surprised that Clive is so quick to refuse her help in solving the murder. Liv and Ravi (Rahul Kohli) investigate on their own which puts them in a precarious situation. Liv’s problems continue to mount when Major (Robert Buckley) begins searching for a roommate and she believes he’s considering a cute co-ed. David Anders also stars. John Kretchmer directed the episode written by Kit Boss.”

Tune in tonight to catch the season 1 episode 4 of iZombie on CW – we’ll be right here recapping it for you live! While you wait for the recap, check out a sneak peek of tonight’s episode below!

The victim’s name is Sammy Wong on tonight’s all new episode of “iZombie” and surprisingly Liv didn’t have to eat his brains before she found that out. Clive it seems knows their victim. Sammy was one of his CI’s. And now that Sammy’s dead, Live thought Clive would want all the help he could get to solving Sammy’s murder.

Yet for some reason Clive turned her down.

He said he didn’t need her on this one and unfortunately Liv had already digested brains. So, whether she’s needed or not, she’s still going to get an insight into Sammy’s. And funny thing, her first brain induced vision involved seeing Clive back in his old working days on Vice.

And according to her vision, Clive wasn’t exactly Dudley Do-Right before he joined the Homicide division. In fact he was kind of shady so then Liv questioned his motives. And asked herself what was the real reason Clive turned down her help.

Unlike Ravi, Liv didn’t want to give their friend the benefit of the doubt. Though, that didn’t really have anything to do with Clive or situation with Sammy. As it turns out Liv had just lost all sense of trust when earlier she ended up running into Major’s current girlfriend.

So Ravi, seeing that Liv wasn’t in the frame of mind, asked her to slow down. He said they shouldn’t be quick to judge. Yet Liv simply couldn’t let this one go so she went to Vice and started snooping around. And apparently Clive was suspended before he transferred out.

His old partners believe he might have crossed a line, the one that becomes very thin on the job like Vice, and the few visions Liv got seemed to prove this theory. Hence she and Ravi did something they shouldn’t have. Like entering a gang den hoping to elicit visions.

That plan of theirs worked but it came at a cost. For instance they alerted a few people to what they were doing and so Liv went home believing someone could be watching her. And her brother who’s been staying with her for the past couple of days proved not to be such a great watch dog.

Evan just let Clive into the apartment without any kind of forewarning.

Luckily, Liv didn’t have anything to worry about. Clive wasn’t dirty a cop and for that matter people back at Vice knew about his involvement in the Asian gang. Hence they lied to Liv to throw her off.

But she didn’t know any of that until her latest vision. In that one she saw Sammy’s murder and it seems he told the gang they were going down. Apparently he wanted the last word and so that justified him telling them about the undercover cop that was close to arresting all of them.

Clive’s former partner, his real partner, was the undercover cop so when Live finally let Clive on the fact she was having visions – he immediately went to go rescue his friend. And he did not take Liv with him. Because it looks like she has a lot of apologizing to do before he can learn to trust her again.

Speaking of trust, though, Blaine had to fire a couple of guys after they attempted to set up a rival business.

Consequently, the guys were a little riled up after Blaine first changed them and then tried to use them as his underlings in selling brains to high paying clients. So they wanted to start selling brains themselves. And for that Blaine put them on ice. Literally!

Meanwhile Liv ran into trouble with someone from the gang and after being attacked in her own home – Clive proved to be more forgiving. It sort of dawned on him that he couldn’t judge her from going off of visions. Though later they worked out a deal that she would come to first before jumping to conclusions.

And in jealous pique, Liv got Ravi to step in and act as Major’s new roommate. It was that or risk Major’s new girlfriend officially moving in.