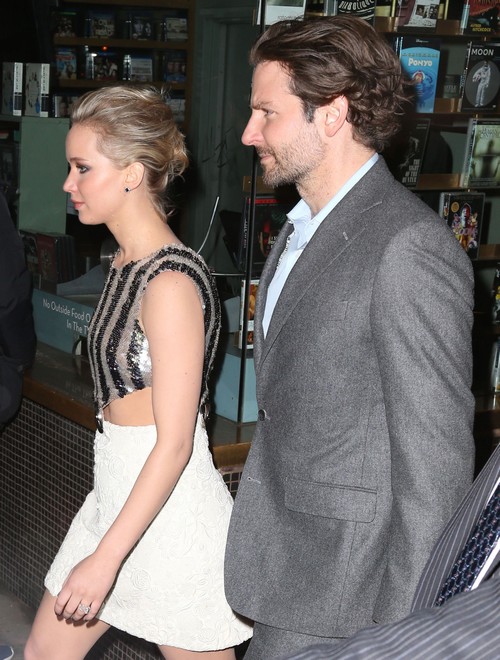 On March 22 Bradley and Jennifer were photographed trying to slip out of Lawrence’s New York City hotel room – and he was even carrying her dog. The two stars are in NYC promoting their new movie Serena, and it looks like they may have been sharing a hotel room while on the publicity tour. News broke this month that Bradley Cooper and his long time girlfriend Suki Waterhouse had broken up – and word on the internet was that Jennifer Lawrence may have been the reason behind their relationship crashing and burning. Considering the fact that Bradley is already spending time in J-Law’s hotel room, there could definitely be some truth to the rumors that she is the reason he and Suki ended their relationship.

According to the April 6th edition of Star Magazine, “No one close to the couple would be surprised if they soon went public with a full-blown relationship. Bradley loves Jennifer’s sense of humor, and Jen is crazy about his good looks and calm nature. They complement each other perfectly and there is no way that they can ignore that.” If Bradley and Jennifer’s off-screen chemistry is anything like their on-screen chemistry, then there is no reason the stars shouldn’t be together! What do you think of Bradley Cooper and Jennifer Lawrence hooking up? Is she the reason that Bradley and Suki broke up? Let us know what you think in the comments below!