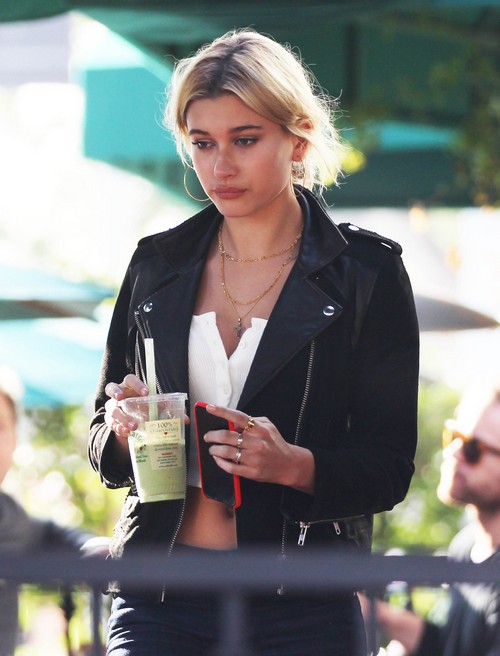 Justin Bieber must have realized that ex-girlfriend Selena Gomez did, in fact, move on to DJ/Producer Zedd after their breakup, because he ran back to Hailey Baldwin, taking her on a lunch date—but she throws shade at Justin hours after their date.

Justin Bieber has been on a mission to change his image as his 21st birthday approaches. CDL told you about Justin’s dinner date with Selena Gomez recently. Selena agreed to meet with Justin thinking he’d be begging her to get back together. She was disappointed when the date didn’t turn out the way she’d hoped. Selena thought she’d be able to show her newfound confidence, assuming Justin wanted to meet to try to win her back.

Justin ended up talking most of the night about himself. We’ve learned that Justin was excited to share with Selena all the changes he is making in his life. Selena assumed it was the same old Justin, promising big changes, but he is trying to prove everyone wrong. After learning, however, that his ex-girlfriend Selena went right back to Zedd after their dinner date and is now getting even hotter and heavier, Justin backtracked a bit himself and called sometimes-lover Hailey Baldwin to have lunch with him on Wednesday at LA’s Urth Caffe.

Despite claiming the two are just friends, Justin and Hailey have spent some intimate time together, even vacationing with Hailey’s family over the holidays. Justin cooled things quickly after that as he felt Hailey was rushing things. And while Hailey may have agreed to Justin for lunch, he must not have won her over or she may still hold a grudge judging by her tweets after lunch with Bieber.

Days before her lunch with Bieber, Hailey tweeted this little gem, likely meant for Bieber who has been ice cold towards her since the new year began.

Sounds like maybe Hailey’s over Bieber’s games and fed up with the fact that his decisions lately have been based on wanting to be liked again by the public, including his team’s recommendation to be single for a while.

Regardless of his relationship status, Justin confirmed that he will be roasted on Comedy Central after he lobbied to be the punchline for the special event. He’s also been kinder and more mature in public as his 21st birthday approaches, even paying for meals for random people at restaurants. Many close to Justin believe this breakup with Selena really hit him hard, and seeing her move on with someone she could likely have a relationship with has forced him to take pause and reflect on his mistakes in life. Many say he is making these big changes, in part, to get Selena back. Selena’s being with Zedd has hit Justin pretty hard, and even Hailey Baldwin can’t make him feel better. And apparently, she doesn’t seem to care to either.

It’s hard to keep track of the games between Justin Bieber and Selena Gomez, but it seems this couple might be done for good this time. CDLers, do you think Selena and Justin are over for good? Do Hailey and Justin stand a chance? What about Zeddlena? Weigh in…