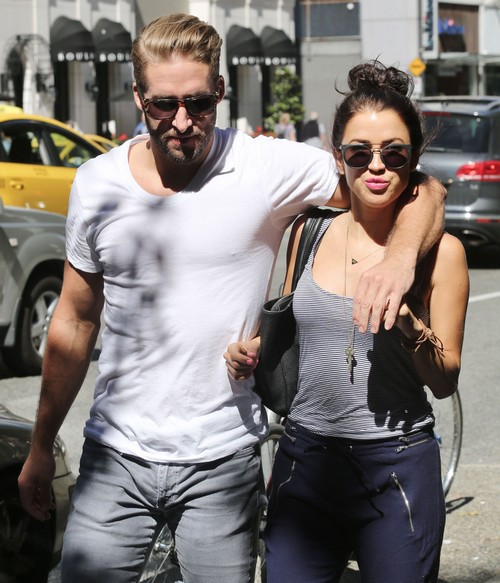 The 2015 Bachelorette Kaitlyn Bristowe and her fiancé Shawn Booth are loving their new found fame and all of the attention they are receiving – maybe just a little too much, like Andi Dorfman? Shawn and Kaitlyn haven’t turned down an interview and appearance yet, and the days that they don’t have something booked, they spend promoting themselves on social media. Now, sources say that the latest couple are hounding Chris Harrison and The Bachelor producers for their own reality TV show, and they may actually be making some headway.

Kaitlyn Bristowe and Shawn Booth only have one thing really going for them that makes them stand out from other Bachelor and Bachelorette couples – they are still together and haven’t broken up yet. There hasn’t been a successful couple to come out of the franchise and actually get married in a long time. Juan Pablo and Nikki, Andi and Josh, and Chris and Whitney all crashed and burned miserably. But, Kaitlyn and Shawn insist that they are different and there will actually be a wedding – and they are using that gimmick to persuade Chris Harrison to give them their own spinoff.

An insider close to the producer dished to CDL, “The Bachelor producers desperately need a success story to keep the franchise going – fans are sick of all the break-ups and are losing faith in the process. Kaitlyn and Shawn pitched a reality TV show about their wedding to the producers and they were definitely interested. It would follow the couple as they planned out all of the details for their big day – and of course the drama that ensues.”

If Shawn and Kaitlyn are trying to land their own reality TV show, that would explain why Shawn didn’t want Kaitlyn to compete on Dancing With The Stars. Now, the obvious question is – are Shawn and Kaitlyn more interested in getting married or getting famous? Both of them have been loving their new D-List celeb status, maybe they are hoping a reality TV show featuring just them will boost their star power? Are they the real deal? Let us know what you think in the comments below!