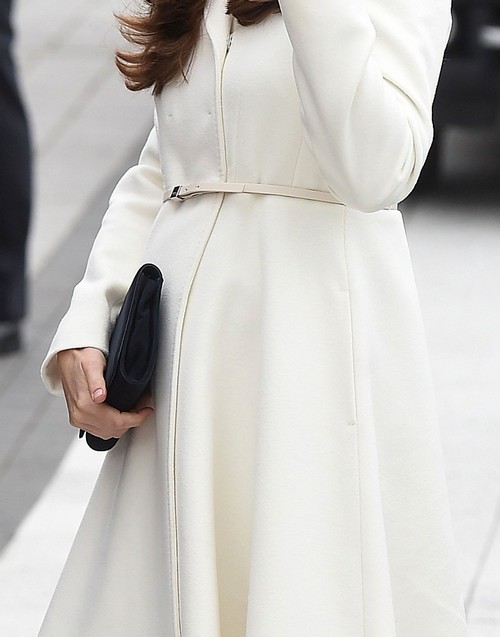 Kate Middleton looked stunning at Portsmouth as she showed off her more than 7 months pregnant baby bump wearing a white coat in new photos at Ben Ainslie Racing. Prince William’s pregnant wife Kate Middleton is now six months pregnant with the Royal couple’s second child, a little sister for Prince George, but that didn’t stop her from making yet another public appearance. On Thursday February 12 the Duchess of Cambridge stepped out dressed in all white to visit the Headquarters of the 1851 Trust, and the site of Ben Ainslie Racing, in Portsmouth, England. Kate Middleton’s growing baby bump was on full display, her due date is believed to be sometime in April 2015.

It’s no secret that Kate Middleton is huge fan of sailing and spent some time sailing across the globe before settling down with Prince William, which explains why she braved the frigid temperatures on the gusty Portsmouth Coast to support the 1851 Trust, which encourages United Kingdom youngsters to get involved in the sailing program. Prince William’s wife visited the Ben Ainslie site to check in on the progress of the racing team’s practice area.

During Kate Middleton and her baby bump’s outing – Kate participated in the painting of a sailing mural at the racing site and even added little stick people to one of the local art teacher’s sailboats. While painting Kate reportedly gushed to onlookers that she should have brought Baby George with her – because he loves painting. Kate received three jackets from the organizers as a gift, one for her, one for George, and one for their dog Lupo. After the mural painting and gift ceremony was over, Kate Middleton and her Royal entourage headed to Spinark Tower where she received a private demonstration of the latest UK sailing technology under development.

We get that Kate Middleton loves sailing – but she is going to be giving birth in two months, we are sure there are other things that she would rather be doing right now. Theis latest parade of the Royal baby bump just proves that the rumors are true and Queen Elizabeth and her publicity team are still forcing Kate Middleton in to the public eye to try and distract the people from Prince Andrew’s sex scandal and the battle over the Throne.

Pregnant Kate Middleton (Catherine, Duchess of Cambridge) visits new home of Ben Ainslie Racing and the 1851 Trust to view an art project by the local community on February 12, 2015 in Portsmouth, England. FameFlynet