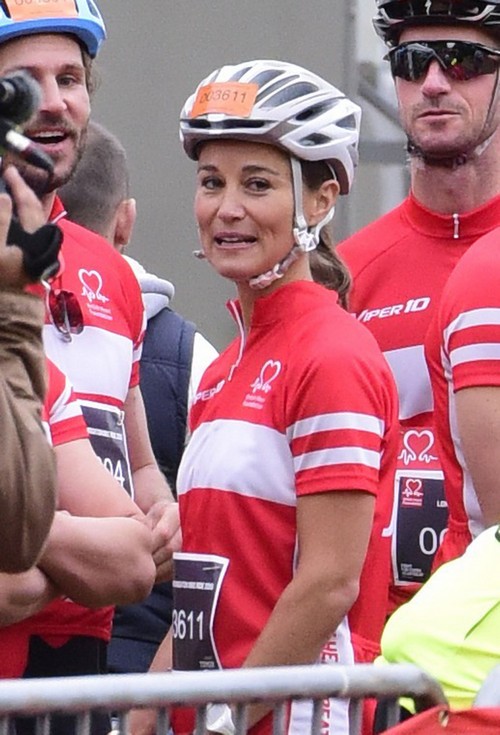 Kate Middleton may have stunned royal fans by debuting another slim and trim post-baby body 6 weeks after giving birth to Princess Charlotte Elizabeth Diana, but the Duchess of Cambridge is allegedly working even harder to tone up. Kate Middleton has reportedly hired her own sister, Pippa Middleton, as her personal trainer, but the move might actually be one of the staff changes made in the Middleton family middle-class takeover of all things royal.

UK’s Now magazine claims that Pippa Middleton has been hired by Kate Middleton to be her personal trainer. A source shared, “Kate wants to get fitter and have a few muscles. She’s very envious of her sister’s body.” The Duchess has always been health-conscious and loves to maintain her fitness, but Now’s royal insider claims Kate isn’t completely happy with her body after seeing her little sister’s figure during a Middleton family trip. “When the Middletons were holidaying in Mustique in February, Kate was in awe of her sister’s figure after she saw her in her bikini,” the source revealed. “She made a pledge to herself that she’d start working out as soon as possible after Princess Charlotte was born.’

The claims go on to detail Pippa’s plan for Kate Middleton’s post-baby body transformation. According to Now, Pippa has big plans that involve ample amounts of time at the Duchess’ country home, Anmer Hall. “Kate has a gym at her Norfolk home Anmer Hall and there’s a swimming pool, too. Pippa’s mapped out a cross-country route for Kate around the grounds. She plans to increase her calorie count by 500 a day so Kate doesn’t burn off more than she gains on her fitness regime. Pippa’s also busy drawing up a high-energy diet that’ll increase Kate’s carbs and protein intake,” the source explained.

The addition of Pippa to Anmer Hall is just one of several staff changes made in recent months. As always, Kate and Will have their trusted nanny, Maria Borrallo. The Spanish caretaker is under the Duke and Duchess’ private payroll. However, Kate and William recently hired a housekeeper who used to work at the palace, after two Anmer Hall employees returned to the Queen’s service.

Let’s not forget that Kate Middleton recently dropped a large amount of money on one of the most sought after professional trainers in London, according to People. The pro worked with Kate during her pregnancy and helped her shed pounds and tighten up after the birth of Princess Charlotte. With a reported multimillion dollar allowance, courtesy of Prince Charles, why would the Duchess abandon the trainer to use Pippa, instead?

Perhaps Kate wanted a more personal experience, or maybe she wanted to cement Pippa into the family and her life among the royals. It’s hardly a secret the Middletons have been breaking protocol and methodically pressing their middle class values into Prince William, Prince George, and Princess Charlotte’s lifestyle. Carole Middleton is dominating the royal family, despite Queen Elizabeth’s protests, placing herself in a powerful position. Carole is the figurehead of Anmer Hall, and according to The Daily Beast, the Middleton monarch is not backing down.

What do you think of Pippa Middleton being employed by Kate Middleton? Is all about fitness, or is there some underlining factors going on?