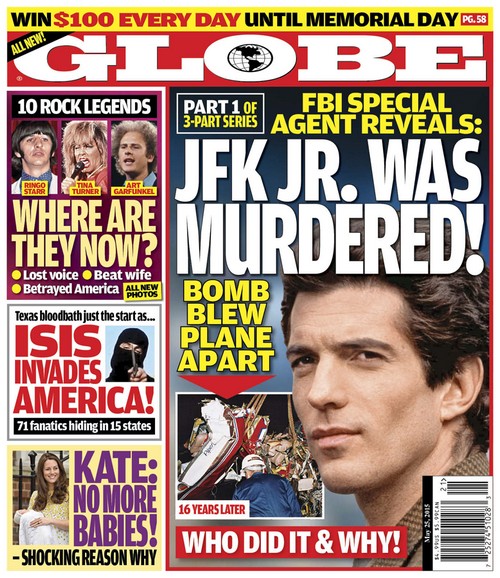 Kate Middleton is done getting pregnant and having babies! Prince William’s wife Kate Middleton, who is already the mother of their toddler Prince George, just gave birth to their second child Princess Charlotte Elizabeth Diana this month. But, don’t expect the Duchess of Cambridge to be getting pregnant again any time soon, because according to a new report she is done having royal babies.

The May 25 cover of GLOBE Magazine features a photo of Kate Middleton holding her new baby girl and is captioned with the headline, “Kate: No More Babies – The Shocking Reason Why.” Our friends at GLOBE Magazine always are the first to break the Royal Family’s juicy drama and scandals, so if Kate Middleton really is done having babies, then they will definitely have all the inside information on why the Duchess is closing up shop.

In other celebrity gossip news, this week’s cover of GLOBE Magazine kicks off Part 1 of an exciting and exclusive three part story on John F. Kennedy JR. According to the May 25 headline, “FBI Special Agent Reveals: JFK Jr. Was Murdered!” GLOBE goes on to tease that 16 years after his tragic death – a rogue FBI agent has come forward to reveal who killed him, how and why. Allegedly a bomb blew JFK Jr.’s plane apart!

Also, this week’s edition of GLOBE Magazine promises an update on some of our favorite rock’n’roll legends, like Tina Turner, Art Garfunkel, and Ringo Starr – and what the singers are up to now.

GLOBE also addresses the growing domestic ISIS terrorist threat in the USA. According to the May 25 issue, the recent Texas terror attack at the Prophet Muhammad cartoon contest is only the start as there are other operatives hiding in several states.

So, do you think Kate Middleton is really done having babies? Is she being forced to stop getting pregnant because of medical reasons – or is it the Duchess of Cambridge’s personal decision? How do you think the royal family will take the news? Is an heir and just one spare enough? GLOBE will have every detail of this story in this week’s issue. Let us know what you think in the comments below and don’t forget to pick up this week’s edition of GLOBE Magazine as soon as it hits the newsstands!