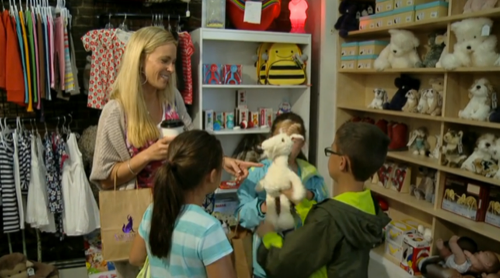 Tonight on TLC Kate Plus 8 continues with an all new Tuesday January 27, season 3 episode 3 called, “The Room Project,” and we have your weekly recap below. On tonight’s episode the Gosselins are flipping their house upside-down! Mady & Cara get their own rooms.

On the last episode, the Gosselins family vacation continued. Overcoming fears of seasickness, the family boarded a boat and learned to trap lobsters. Later, there were crew lessons, shopping for souvenirs, a day at the beach, and per tradition, an ice cream family dinner. Did you watch the last episode? If you missed it, we have a full and detailed recap right here for you.

On tonight’s episode as per the TLC synopsis, “the Gosselins are flipping their house upside-down! Mady & Cara get their own rooms, while the little girls are moving upstairs and the boys down. But will a mini-meltdown cause these room renos to go awry?”

Tonight’s episode of Kate Plus 8 kicks off with mayhem in the Gosselin house, the kids are supposed to be cleaning their rooms and remodeling the girls’ room. One of Kate’s teen daughters, Kara has a meltdown and starts crying – and all of the kids start bickering with each other. Half of her kids start yelling at Kate and telling her that they don’t want to move into a new bedroom. Leah runs downstairs and refuses to talk to Kate. Kate whines to the camera crew that this is why she has shingles, it is from all of the stress of the moving process.

The boys new bedroom is going to be even harder to pull off, Kate is moving them down to the basement and remodeling it and turning it in to a man cave. But, she has to move out all of her freezers full of food and have a yard sale to get rid of some of the junk in the basement. Kate decides to give the kids a chance to paint on the walls whatever they like before the painting crew arrives. But, it quickly turns in to a disaster when the kids start tracking paint on the hardwood floors – Kate screams and starts scrubbing the floors and the bottoms of her kids’ feet.

The next day construction kicks off in the house – and Kate is shocked when she sees the paint on the wall and realizes that it is totally the wrong shade of blue. The painter tells her that she is going to have to pick a new color, and go get more paint. Meanwhile in the basement everything is going as planned, and Kate is thrilled by the remodeling. She jokes that she is going to move down in the basement. Kate is shocked by how fast the basement is transforming, she flirts with the carpenter and convinces him to help her cut some wood to make a bullseye for the kids to throw pumpkins at outside.

After Kate has some large targets painted on sheets of plywood, she and all of the kids head outside to carve pumpkins. They reminisce about all of the times that they have carved pumpkins together over the years, and the girls begin whining about the “pumpkin guts” and crying that they need to go wash their hands. Kate goes inside and is livid when she sees that the kids never cleaned up their mess before they started carving pumpkins. She goes on a tirade about cleaning up bathrooms and hanging up towels when they are done – and threatens that they aren’t going to be allowed to move in to their new rooms.

Once the kids are done carving pumpkins they all head to the yard to throw pumpkins at the targets. They wind up in a screaming match over the rules of the game and who is on which team. Kate realizes that the game isn’t as fun as she thought it would be because the pumpkins are too small and hard and they aren’t smashing when they hit the target. Finally they get in to the game, and the kids have a good time – until it is dark and they have to head inside.

The next morning the kids have to get up bright and early for their first day back at school after summer vacation. While they are supposed to be getting ready for school, the kids get out their instruments for their school band and play “little diddies” for the producers. Cara and Maddie complain about having to sleep on air mattresses in the living-room.

After school everything in the house is crazy, and Kate has to make an “emergency dinner,” which is organic chicken fingers and salad. She has the girls chop up veggies for the salad and pops the frozen chicken fingers in the oven. Kate explains to the producers that she doesn’t like to be “militant,” – but when you are a single parent raising eight kids by yourself you will realize that you need structure and a strict regimen. Kate sits down to eat with the kids and laughs that when she gets old they are going to have to take care of her and cook her dinner.

Kate’s kids have a serious issue with their own space and clothing, and they fight over who is wearing who’s clothes. They head to a used furniture store to check out dressers for their new rooms. After hours of wandering around and shopping – Kate is not happy with any of the items in the used store. She ends up buying a brand new dresser and says that she is going to give it to Ayden because he has “never done a bad thing in his life.”

While the kids are at school the next day, Kate puts the finishing touches on the kids’ brand new bedrooms. They are thrilled when they walk through the door – and Kate announces their rooms are done. They all line up for the big room reveals – of course before Kate opens the doors she lectures them about keeping them clean. Kate’s kids squeal with delight as they race in to their new rooms.