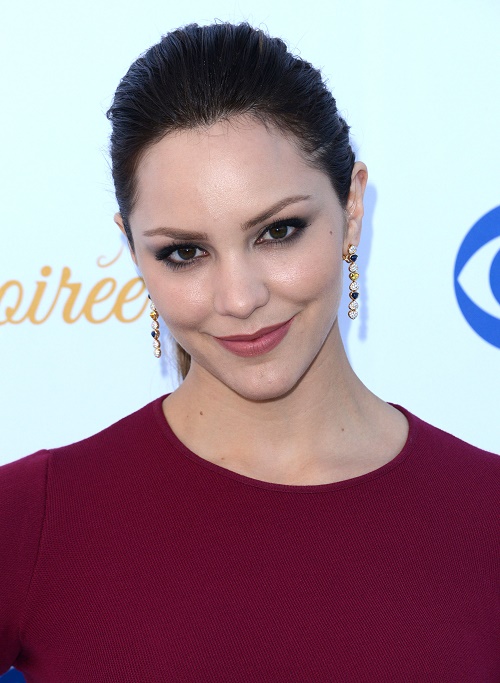 The May 25 edition of Star Magazine reveals that Katharine has been sneaking around with her ex-husband Nick Cokas since they divorced – unbeknownst to her current boyfriend Elyes Gabel. Star explains, “The American Idol alum – who has been dating Elyes Gabel, was spotted enjoying a very intimate lunch with her ex-husband Nick Cokas on May 5. Though Katharine’s camp insists it was a friendly meal, Nick was photographed tenderly caressing her face.”

It sounds like Katharine’s camp may be in denial – pictures don’t lie. If we were Elyes Gabel and photos popped up on the internet of Katharine McPhee smiling ear to ear while she was out to eat with her ex-husband and he was rubbing her face – we would have a few questions. An inside source dished to Star Magazine, “She really does care for Elyes. But, she is torn, Nick keeps reminding her of all of the good times they had together. He is pushing for them to give their relationship another go, and even though it would hurt Elyes, Katharine is seriously considering it.”

When you begin dating someone fresh off a divorce, you are basically playing a gambling game. Everyone knows there is a good chance that your new girlfriend could go running back to her ex-husband. Obviously, we feel for Elyes, but when he began dating Katharine McPhee right after divorce from Nick Cokas, he should have known that Katharine and her ex-husband getting back together was a real possibility. Do you think Katharine should come clean to Elyes about her romantic dates with Nick? Is she technically cheating on him? Will she and Nick Cokas actually get back together? Let us know what you think in the comments below!