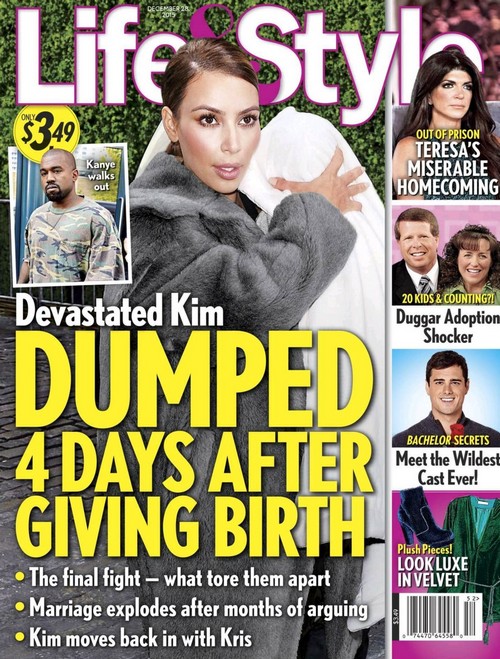 Kim Kardashian divorce reports claim that the ‘Keeping Up With the Kardashians’ star has been dumped by Kanye West just 4 days after giving birth! Kim delivered Saint West on December 5, but Kanye supposedly walked out on Kim less than a week later according to rumors. Is Kimye over?

Kim and Kayne left the hospital on December 7, taking their newborn son home conveying the image of a picture-perfect family. However, the celebrity couple’s relationship allegedly exploded after a fight in which Kardashian complained that Kanye disregards her ideas.

“Kim yelled at Kanye for never being around or including her in any of the decision-making – he’s always discounting her ideas and ignores her,” the source convinced Life & Style. “His response was to walk away. That’s when Kim really flipped out. But Kanye just kept walking, turning back only to tell her, ‘I’m done,’” the source ends weakly. “’Now Kim’s been telling friends, ‘I feel like I’ve been dumped.’”

The report goes on to claim Kanye is planning on jetting off to Paris because his creative juices are flowing after the birth of Saint West. Kim is allegedly “freaking out” and begging him not to go. “She’s in a state of shock,” the source insists.

CDL isn’t buying this story of Kim Kardashian and Kayne West’s divorce. Couples fight, and with Kimye’s ego – it wouldn’t be surprising if they fought over every detail of their lives. However, Kanye West took their 2-year-old daughter, North, to Disneyland with the entire Kardashian clan on Monday – just 2 days ago.

Kim stayed home to continue her recovery, while West enjoyed a mini-break with the Kardashians. If Kanye was really dumping Kim Kardashian – he wouldn’t be spending time with Kris Jenner and Kim’s family.

What do you think? Is the Kanye West and Kim Kardashian divorce happening? Was Kim dumped by Kanye West just 4 days after giving birth to Saint West? Let us know your thoughts in the comment section below and keep checking CDL for updates on the Kimye.

Part of the Kardashian family was spotted at Disneyland in Anaheim, California on December 14, 2015. The group spent their time riding rides and stopping to take photos with fans by FameFlynet.