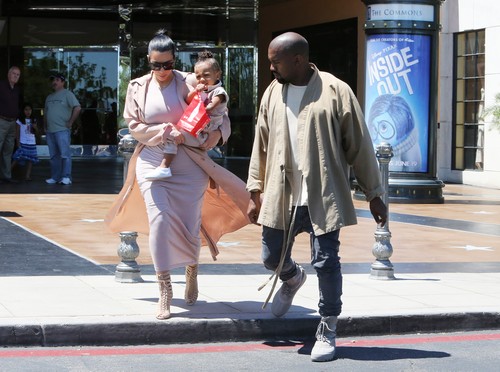 Kim Kardashian and Kanye West are always on the verge of a divorce for one reason or another – but their latest fight could be the grand finale. Kim Kardashian recently announced that she was pregnant with Kanye West’s first son, whom Kanye plans to raise as an “heir to their empire.” Kanye takes the fact that their family is “pure” very seriously, and has no intention of having any adopted children or children from other relationships brought in to the mix. The Kardashian-West bloodline is strong, and he doesn’t want it tainted.

Kanye West is fuming that Kim Kardashian has basically taken her nephew Mason Disick in during the midst of Kourtney Kardashian and Scott Disick’s messy public break-up. Children are already an inconvenience for Kanye, the last thing he wants is to be raising her sister’s kids too. Not to mention the fact that they are going to be having a son of their own in a few months, and Kanye doesn’t want their Kardashian-West son to be living in her nephew’s shadow.

Since Scott and Kourtney’s break-up, Mason has basically been living with Kim and Kanye. It was too much for Kourtney to take care of the three babies on her own, and Kim has always had a strong bond with Mason. But, it is driving Kanye Wet insane! Mason is cramping their style, and being the controlling husband that he is – he hates seeing Kim treating someone else like she should be treating his unborn son, and even posting selfies with him as if she is his mother.

An insider dished to CDL, “Since Kim took in Mason, she and Kanye have been fighting non-stop. He is sick of her family’s drama trickling in to their lives. And, it is really making him jealous that Kim is showering Mason with so much love, he keeps reminding her that Mason is not her son – and they are not under any circumstances raising him for Kourtney. Kim refuses to budge though, and that is only making Kanye angrier, that in his estimation Kim is choosing her family over her husband.”

Is Kanye West seriously jealous of a 6 year old? Any grown man who feels insecure about his wife taking care of her 6 year old nephew should get served divorce papers. Do you think that Kanye has a point, or is he being ridiculous, again? Let us know what you think in the comments below!

Kim, Kourtney and Khloe Kardashian film scenes for ‘Keeping Up With The Kardashians’ at Hugo’s Restaurant in Ahoura Hills, California on July 24, 2015. Kim, who is currently pregnant with her second child, hid her growing baby bump under a tight grey dress.

Pregnant reality star Kim Kardashian is spotted heading to a movie theater in Calabasas, California to enjoy a movie with her daughter North and husband Kanye West on July 12, 2015. Kim’s growing baby bump was barely visible under a skin tight dress. FameFlynet