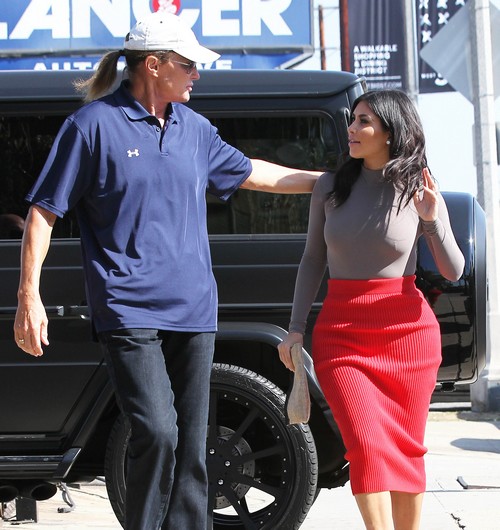 The Kardashian and Jenner family has banned together in support for Bruce Jenner, after the once hailed, “worlds greatest athlete,” finally revealed to Diane Sawyer that he is transitioning from a man to woman. Bruce Jenner certainly earned a gold medal for honesty and bravery in his landmark interview with Diane and we applaud him for that.

E! News confirms that as of this time, Bruce Jenner has not chosen to identify as a woman publicly, so we will continue to refer to him as Bruce, and use male pronouns when discussing him, until he chooses otherwise. Mind you, Bruce did say that his April 24 ABC interview was his last as a man.

During the interview, the 65-year-old Olympic gold medalist admitted that he has felt this way for a while. He says, “Yes, for all intents and purposes I am a woman. People look at me differently. They see you as this ‘macho male,’ but my heart and my soul and everything I do in life, it is part of me, that female side is part of me. It’s who I am. I was not genetically born that way.”

Bruce Jenner opened up to Diane Sawyer about his decisions during a highly anticipated interview on ABC News. Now, Bruce’s family is reacting and showing their immense support of their father.

Kim Kardashian, who Bruce revealed in the interview has been “by far” the most accepting of his transition, tweeted out, “Love is the courage to live the truest, best version of yourself. Bruce is love. I love you Bruce. #ProudDaughter.”

Bruce’s son Brandon Jenner shared a picture of himself with his dad and captioned it, “Proud son,” while Kendall Jenner said, “I love you, so very proud of you, my hero.”

Kourtney Kardashian tweeted and said, “Couldn’t be a more proud daughter. With courage and bravery, let’s change the world. I am honored to stand by Bruce’s side and support him.”

Bruce revealed that Khloe Kardashian has been having the most trouble with the transition. He goes on to say that she feels like she has lost so much, with the death of her father, her divorce with Lamar, and now Bruce’s transition. Khloe was still supportive of his decision and tweeted , “Just finished watching the #BruceJennerInterview with the family. Bruzer, I’m soon proud of you! Dads really are heros.”

Kylie Jenner also responded to the interview by saying, “Understandingly, this has been very hard for me. You will hear what I have to say when I’m ready to but his isn’t about me. I’m so proud of you Dad. You are so brave. My beautiful hero.” Hmm, it sounds like Kylie will have more to say about this in time. We are interested to hear the young reality star’s true thoughts.

Of course, you cannot have a Kardashian Jenner event without the ringleader commenting. Kris Jenner wrote to her fans and said, “Not only was I able to call him my husband for 25 years and father of my children, I am now able to call him my hero.” Well Kris is not to be trusted here I’m afraid. During his interview Bruce made it abundantly clear that Kris Jenner knew for decades that Bruce was transgender and yet just a few months ago she publicly denied such knowledge.

What are your thoughts on his family’s reactions? What do you think Kylie Jenner will say when she is “ready” to share her thoughts? Do you really care what Kylie Jenner has to say about anything, besides lips of course! Let us know in the comments below.