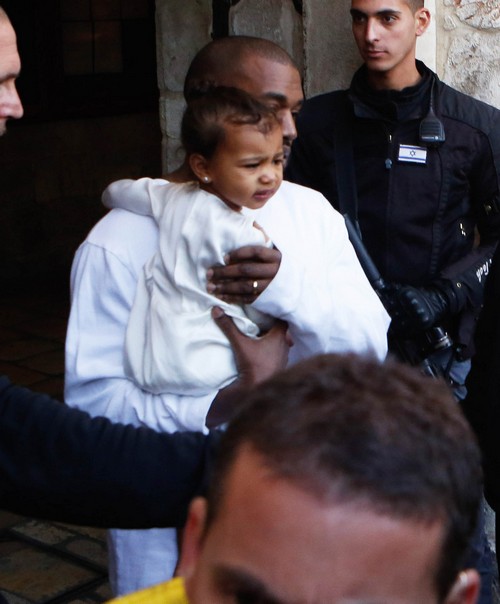 Reality TV star Kim Kardashian and her husband Kanye West appeared in Jerusalem, the capital of Israel, on Monday April 13 for the baptism of their daughter, North West. The baptism took place at the St. James Cathedral in the Armenian Quarter of Jerusalem’s Old City.

Kim Kardashian and Kanye West flew in from their pilgrimage in Armenia and landed at Tel Aviv’s Ben Gurion airport, and then drove directly to the Holy City for their daughter’s ceremony.

Khloe Kardashian was also in attendance. Khloe was dressed in all black, and immediately greeted everyone when the stars arrived to their destination. Kanye was dressed in all white, and Kim wore a modest floor-length gold dress, which had long sleeves. North West wore a long white gown for the occasion. It is nice to see that Kim and Kanye got the memo about what to wear, and how to not make a big scene.

While there were still hundreds of fans screaming as the reality stars’ SUV approached, it was much more controlled than Kanye’s lake incident.

Local reporters waited for the Kardashian family at the entrance of the church. That’s when Archbishop Aris Shirvanian came out to give a statement to the reporters. He said, “It’s a baptism that will take place. Kim Kardashian’s daughter will be baptized and she will become a Christian officially and a member of the Armenian church.”

After the paparazzi took all their photos, the family entered the church for the 90 minute ceremony. After the ceremony, the family went on to visit the Church of the Holy Sepulcher and the Western Wall. US security guards were seen inspecting before areas prior to their arrival. It seems the Kardashian’s and Kanye West will be back in the US soon. Are you ready for them?

Kim and the gang back in Aremenia before  heading to Israel’s capital city, Jeruslem for North West’s Baptism

Kim Kardashian, along with her husband Kanye west and their daughter North are seen at the Armenian St. James Cathedral in Jerusalem’s Old City for a reported baptism ceremony of their child, on April 13, 2015. Kim’s sister Khloe was also at the Cathedral. FameFlynet