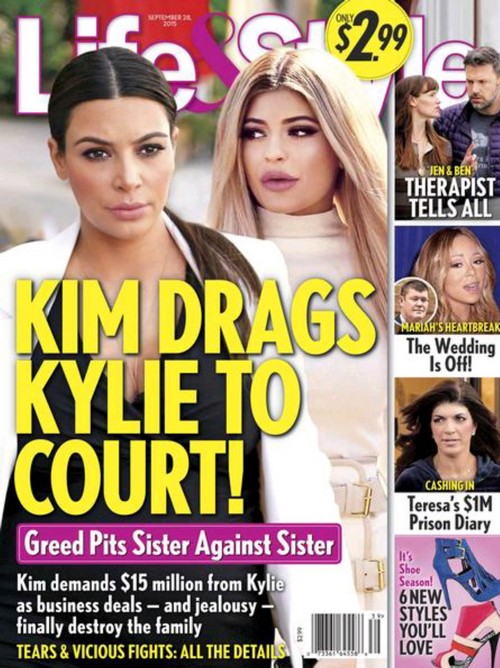 At first it was cute that Kylie Jenner was her sister Kim Kardashian’s doppelganger, and the two Keeping Up With The Kardashians stars are constantly being compared to each other. But, Kylie Jenner’s sister has had enough – because the younger and improved version of herself (Kylie) is making more money than she is now, and Kim wants a percentage! According to a new report, Kim is taking Kylie to court because she thinks her little sister stole her image and has been copying her for years – so she owes her some royalty money.

This week’s cover of Life & Style Magazine features a photo of Kim Kardashian, and she looks like she means business. The headline reads, “Kim Drags Kylie To Court: Greed Pits Sister Against Sister.” The tabloid goes on to reveal, “Kim is fed up with how much money Kylie is making by mimicking her. She says that she is entitled to at least thirty percent of those earnings.”

According to the report, if Kim’s case holds up in court, Kylie Jenner could wind up being ordered to pay her big sister up to $15 Million.

This year was definitely Kylie Jenner’s year, and despite her sister Kim’s pregnancy, Khloe’s divorce, and Kourtney’s break-up, Kylie has outshined all of her Kardashian sisters and become much more relevant than they ever were. It’s crazy that Kylie’s lips have actually gotten more press than Kim’s baby bump. And, more press equals more money. Kylie is raking in all of Kim’s endorsement deals and paid appearances – the reality TV Queen is old news, and everyone seems to be interested in her little sister, not her.

A new report on TMZ reveals that Kylie Jenner has slayed her sisters in their new website ventures. Kim, Kendall, Kylie, and Khloe all unveiled their new websites, which charge fans a $2.99 per month fee to get an inside look at their worlds. In the first 24 hours 891,000 signed up for the four websites, and 74% of those people signed up for Kylie’s site instead of Kim’s. That’s just one more thing for Kim Kardashian to be livid over, and to bring up in court.

Do you think that Kim Kardashian has a case against her sister Kylie? How sad is it that a grown woman is suing her 18 year old sister for millions of dollars because she is jealous of her fame and fortune? Let us know what you think in the comments below!