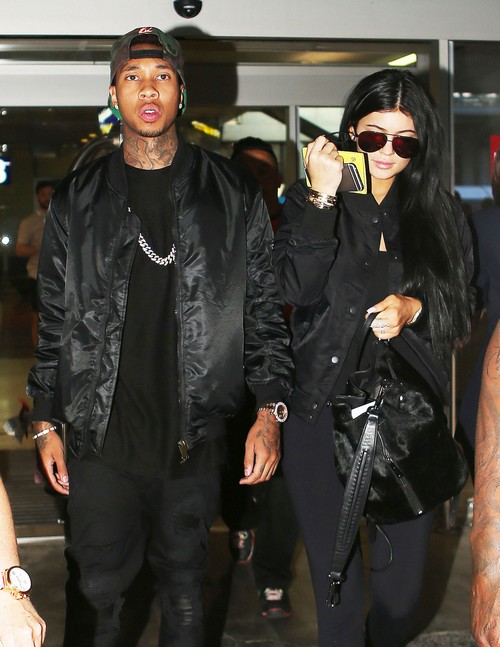 Are Kylie Jenner and Tyga getting married? Rumors have been floating around for months that 17 year old Kylie of Keeping Up With The Kardashians was planning on marrying her controversial boyfriend, 25 year old Tyga. Word on the internet is that Kylie and Tyga plan on eloping as soon as she turns 18 years old. Normally Kris Jenner is all for a Kardashian wedding that she can make millions off from, but since her teen daughter is cutting her out of the plans and just wants to say “I Do” in a courthouse – momager Kris is NOT having it.

According to a new report, the rumors about Kylie and Tyga getting married are 100% true, and Kylie and Tyga have already gone ring shopping, and obviously Kylie footed the bill. Insiders dished to Radar Online, “She’s told her mom this is happening with or without her consent, so Kris has no choice but to embrace it. They’re looking for a ring and Kylie wants to help Tyga fight for full custody of his son.”

Tyga is currently working on a reality TV show of his own for MTV which is titled, “Kinging With Tyga,” and the couple’s nuptials or courthouse wedding will most likely be a central storyline on the show – along with Kylie’s feud with his baby-mama Blac Chyna. At this point, nothing any of the Kardashians do surprises us anymore. We’ll just be impressed if Kylie winds up married before she winds up pregnant. And, you have to admit, it is pretty hilarious that Kris’s family is rebelling against her left and right. But, the real question is – is Tyga marrying Kylie for her cash, or is he truly in love with her?

What do you guys think about Kylie and Tyga getting married? Is it a recipe for disaster? Is Tyga in love with the teen, or just her bank account? Let us know what you think in the comments below!

Kylie Jenner and Tyga are seen arriving on a flight at Nice airport in Nice, France on June 23, 2015. The pair were rocking matching black outfits and grey sneakers while arriving in France. FameFlynet