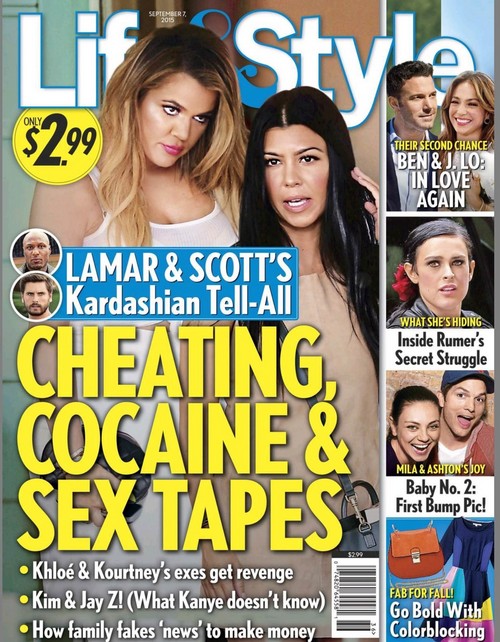 According to Life & Style magazine, the jilted exes of two of the Keeping Up with the Kardashian stars are gearing up to spill the ugly underbelly of the Kardashian clan. Looks like Lamar Odom and Scott Disick are set to cash in with a tell-all that will expose more Kardashian dirty antics than even Kim Kardashian’s sex tape. We’re talking sex, drugs, cheating and more – juicy, juicy stuff…

Both Lamar Odom and Scott Disick feel used and betrayed by Khloe Kardashian, Kourtney Kardashian and especially by momager Kris Jenner, that they are banking on a $5 million book deal that’s only further sweetened by the prospect of revenge. Both Odom and Disick feel like their association with the Kardashian reality show machine has ruined their personal and professional reputations.

While both Scott Disick and Lamar Odom have been accused of substance abuse issues (with good reason), they plan to expose Khloe Kardashian and Kris Jenner’s 24/7/365 drinking issues. They also plan to reveal copious drug use among family members including abuse of cocaine, Xanax, Ambien and prescription diet pills. The drugs are just the tip of the iceberg. There’s also cheating, lies and more!

Kris Jenner allegedly encouraged Kendall Jenner and Kylie Jenner to start using Botox and fillers while they were still teens. In fact, it may be Kris Jenner that pushed Kylie into getting that puffed up trout pout that she’s been hassled about so much. Kris would have had to sign off on any cosmetic procedures the teen girls had since they were underage. Nice mothering!

They will also expose Kris Jenner’s horrible treatment of Rob Kardashian over his weight. Rumor has it that Kris Jenner and Kim Kardashian have repeatedly humiliated Rob Kardashian about his weight which has led him to retreat behind the gates of Khloe Kardashian’s gated community and hole up in her house, hurt by his family rejection of him because he doesn’t meet their standards.

And the “reality” show itself is reported to be part of the tell-all book and Lamar Odom and Scott Disick will reveal that the show is not only a scripted program designed to maximize profit for Kris Jenner’s. The expose will include info on strategy plans about when to leak certain stories including Kim Kardashian’s notorious sex tape that started them on the path to shady stardom.

Some other especially juicy tidbits relate to Caitlyn Jenner – and how Kris Jenner, Kourtney Kardashian, Khloe Kardashian and Kim Kardashian have dissed their transgender step-dad/mother behind her back. While they preached acceptance on social media and made nominal appearances on I Am Cait, behind Caitlyn’s back, they have been vicious and critical of her life change.

Likely all of this could have been avoided, except for a couple of recent events. When Lamar Odom went to see Khloe at Soul Cycle in LA – a prearranged appointment – she caused a scene and accused him of stalking and harassing her. That was the last straw for Lamar who has tired of being humiliated by his soon to be ex wife’s family. That and Scott Disick being dumped were the two critical issues.

Scott Disick suggested to Lamar Odom that they team up for the tell all, which should sell like filthy, filthy hotcakes. And if they can get Kim K’s two disgruntled ex-husbands to weigh in – Kris Humphries and Damon Dash – that would be icing on the revenge cake. Fingers crossed that these two get to work writing the dirty scoop up ASAP. Can’t wait to read it!