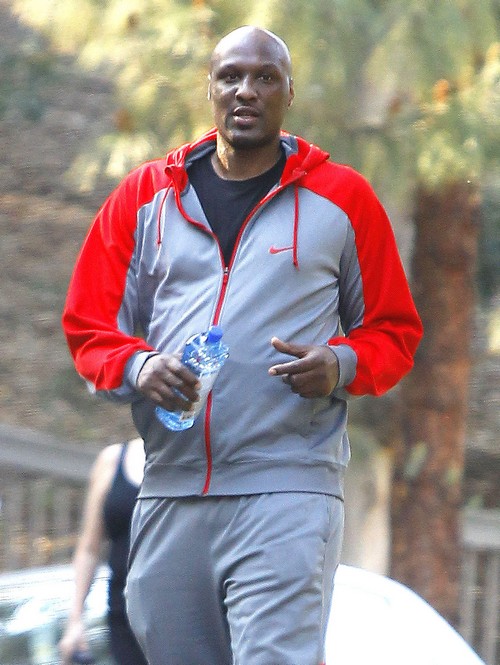 Khloe Kardashian’s ex-husband Lamar Odom was found nearly dead after days of partying and rushed to a hospital and placed on life-support. Apparently, Lamar was on a three day bender at Dennis Hoff’s Love Ranch South in Pahrump, Nevada with numerous girls and sources say he was taking an herbal substitute for Viagra.

We’re having a tough time believing that was all Lamar was using … considering his previous drug addictions and his close pals’ overdoses earlier this year, it is not looking good for Odom.

According to a report: “Sources at the Love Ranch tell TMZ … 35-year-old Odom arrived at the Ranch Saturday and was partying with the girls for days. A source at the Ranch said Lamar was taking an herbal substitute for Viagra. On Tuesday afternoon, someone went into Odom’s room and found him unconscious. The person rolled the former NBA star over and saw fluid streaming out of his mouth. An ambulance took Lamar to Pahrump hospital, where doctors intubated him … an indication he could not breathe on his own. We’re told Lamar is being airlifted from the hospital to Las Vegas for more treatment.”

The fact that Lamar Odom can not breathe on his own is very serious, and if he does pull through there is a possibility of brain damage because we have on idea how long he was unconscious for before anyone found him passed out.

So far none of the Kardashians have addressed the reports – and it is unclear whether Khloe will be flying to Vegas to be by her estranged husband. CDL will keep you updated on Lamar Odom’s status and any more details that emerge.

Update: TMZ says Lamar Odom is being airlifted from the hospital to Las Vegas for more treatment.
sources say: “It’s not good.” Latest word Wednesday morning is that Lamar is unconscious on a respirator in critical condition and some of his organs are failing.

As of Wednesday Afternoon at 3 PM EDT Lamar is doing poorly and the hospital reports that the critically ill man has only a 50% chance to live. Track marks and evidence of crack cocaine use have been reported by hospital staff. Lamar has suffered from multiple strokes and has incurred brain damage, the extent of which won’t be known unless he regains consciousness.

As of Thursday night EDT 10 PM there is no real change in Lamar’s condition noted although some sites are claiming a slight improvement – this has not been confirmed by the hospital. Allegedly, Lamar squeezed Khloe’s hand but that seems most improbable given her husband’s current medical status. The Kardashians have all left Las Vegas except for Khloe who has remained by Lamar’s side.

Update: Friday 8:30 AM EDT – Lamar is in ‘dire straits’ according to TMZ’s sources close to the situation and still has only a 50% chance to live – 4 organs are failing and Lamar will has permanent brain damage, unable to breathe on his own – if he lives he will never again lead a ‘normal’ life.

New Update: Friday 11:58 AM EDT – Lamer’s heart is improving, responding to treatment and this is good news at last! CDL will bring you more details as they become available. According to TMZ Khloe is at Lamar’s bedside.

Update: Friday 4:25 PM EDT – Lamar is being taken off life support and appears to making somewhat of a recovery at this point! We will update you as more info becomes available.

Saturday: 12:11 AM EDT – Lamar’s prospects are looking better as medical staff report to TMZ that the former NBA star was never totally deprived of blood oxygen and this may have saved his life and improved recovery chances. Prospects for his return to normal life depend on how much damage was done to his brain from his multiple strokes.

Saturday – 9:09 AM EDT: Lamar is recovering and his heart is improving as is his breathing – some family and friends report that Lamar has regained conciousness although this hasn’t been independently confirmed by medical officials or Lamar’s reps.

– 7:10 PM EDT: Lamar is breathing completely on his own and responding both verbally and physically to Doctors – Still in critical condition as several organs are not yet working normally. However there has been substantial improvement over the past 24 hours.

Update Sunday – 8:12 AM EDT: and the Lamar Odom news this morning indicates he will live – Lamar is conscious but barely able to speak, mostly just mumbling however he can respond to questions with thumbs up or down hand signals – he is breathing entirely on his own and is recovering from his heart attack. The extent of the brain damage caused by the strokes and overdose is as yet unknown and the former NBA player is far from totally recovered. Kudos to Khloe who has been with Lamar since arriving the hospital.

7:45 PM EDT – Lamar is reported to be smiling and talking with his Kardashian and Jenner guests and recovering well – certainly appears now that Lamar is out of the woods.

Monday 6:56 AM EDT – Lamar is out of danger and will begin months of rehab on speech and movement to regain the use of his abilities – there will be as yet unknown degree of permanent damage to certain organs and his brain – Khloe Kardashian has committed to stay with her husband during his entire rehab!

Reality star Malika Haqq stops by a Starbucks and a Smith’s Grocery Store for some supplies in Las Vegas, Nevada on October 17, 2015. Malika just arrived in Vegas with Kim Kardashian and Kris Jenner to visit Lamar Odom.

Lamar Odom’s son and daughter spotted arriving at the hotel they are staying at while visiting their dad in the hospital. Odom is awake after being unresponsive for a couple of days. He seems to be improving. FameFlynet