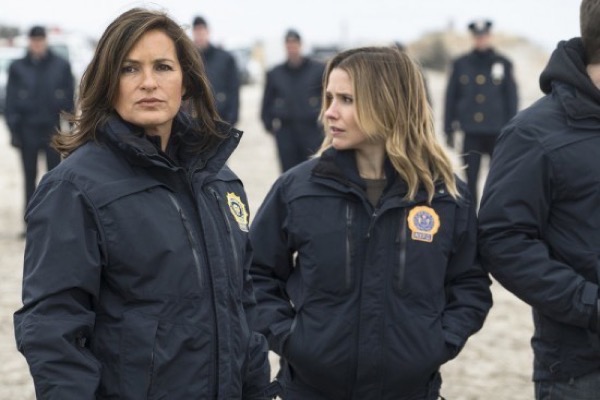 Tonight on NBC Emmy Award-winning producer Dick Wolf’s crime drama, Law & Order: SVU continues with an all new Wednesday April 29, season 16 episode 20 called, “Daydream Believer” and we have your weekly recap below. On tonight’s episode, a Chicago crime resembles a decade-old New York City case, so police from Chicago arrive and team up with the squad to track down a suspect they had to release earlier.

Tonight’s season 16 episode 19 looks like it is going to be great and you won’t want to miss it, so be sure to tune in for our live coverage of NBC’s Law & Order: SVU at 9:00 PM EST!

On Part Two of tonight’s crossover, it wasn’t long before Nadia’s absence was noticed and though the police were quickly put on alert – it was far too late for them to rescue a friend. Yates had dragged Nadia out of state kicking and screaming by time her people started looking for. And to make it difficult for them, Yates kept switching his plates along the way. So, initially, the only way they could find him was to track each License Plate he had stolen.

And that showed that Yates was heading back to familiar territory – he was driving back to New York.

Thus, at this point in the investigation, New York detectives were back in charge and that meant Voight couldn’t just fly off the handle at the drop of a hat. And that goes for when he especially wanted to. Like when they found Lindsey’s car not long after Fin and Amaro returned with some of Chicago’s finest.

Luckily, Nadia’s body wasn’t found in the car. Nor was there any large amounts of blood at the scene but she did leave her scarf behind intentionally. It was way for Nadia to assure her friends that she was alive in the car. However there was no way they could know if she was still alive after leaving the car.

Yates is smart. He attacked a woman that had come close to identifying him back in Chicago and when the cops finally caught up to him in New York – he pretended to be as innocent as a newborn baby. As in he claimed Nadia came with him because she wanted to see the city and then he implied she ditched him to go to some random party.

And his fiancée, the one knew about, backed him up.

The poor woman had no idea who she was involved with. And when the detectives tried to shake her out of her illusion – he still refused to believe them. How could her fiancée have kidnapped a woman when he said he spent the past few days at the beach?

Apparently, Yates had sand on him when he came home so he told his fiancée “everything”.

And that tip with the sand led the detectives to finding Nadia’s body. Unfortunately she had been killed hours earlier but up until the point they found her – Detective Lindsey had tried to be hopeful. And then it was all for naught.

Nadia’s body had been found and two more women had been assaulted but at the end of the day there was no evidence against Yates. What they had was circumstantial at best. So when the ADA decided to go ahead with an arrest warrant – he knew he didn’t have the best of chances. Though he didn’t let that stop him.

Barba knew this was their only chance to put away Yates but what he wasn’t prepared for is Yates representing himself in court.

Yates is actually pretty brilliant. He’s disturbed all right but still brilliant. Hence he was able to defend himself very well. So well in fact that Barbra was losing the case.

Yates had made Lindsey appear to be a misguided friend and he also accused Voight of sexually assaulting months before her death. Meaning he knew how to work the jury. And they were eating up every lie he told.

But then Yates destroyed himself because once he began cross-examining the medical examiner – he got too worked up as she started to describe the torture Nadia had gone through prior to her death. It was like he was experiencing it all over again and everyone in the courtroom got to see how much torture excites him.

So Yates was convicted for the rape and murder of Nadia. Though if he thinks it’s going to be smooth sailing from here on out then that visit he received in his cell now means he knows differently.

See, Voight had promised him something. He said everything that happened to Nadia was going to happen to him.