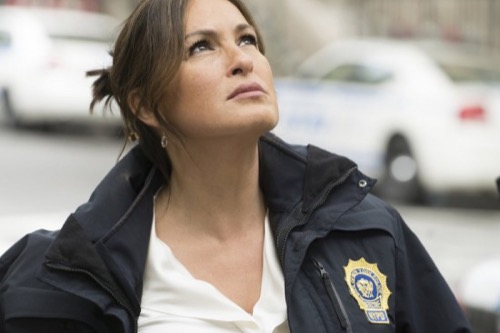 For those of you who aren’t familiar with the show, Law & Order: Special Victims Unit is an American police procedural, legal, crime drama television series set in New York City, where it is also primarily produced. In the style of the original Law & Order, episodes are often “ripped from the headlines” or loosely based on real crimes that have received media attention. Created and produced by Dick Wolf’.

On tonight’s episode as per the NCB synopsis “the SVU is called to a familiar crime scene – the beach where serial killer Gregory Yates (guest star Dallas Roberts) buried his many victims. When another body washes ashore, Detective Rollins (Kelli Giddish) tries to coax him into confessing, but the surprising information he provides sends shockwaves through the police department. As the case goes to court, Barba (Raul Esparza) faces off against two hotshot defense attorneys in a trial that leads to blackmail, an incriminating confession, a new victim and a fugitive suspect. Also starring Mariska Hargitay (Sergeant Olivia Benson), Ice T (Detective Odafin Tutuola) and Peter Scanavino (Detective Sonny Carisi).”

Tonight’s season 17 premiere episode looks like it is going to be great and you won’t want to miss it, so be sure to tune in for our live coverage of NBC’s Law & Order: SVU at 9:00 PM EST! While you wait for our recap hit the comments and let us know how excited you are about the new season?

Tonight’s episode of Law & Order: SVU kick off with divers pulling a body out of the water – ironically at Yate’s burial ground. Olivia and her team arrive, they are baffled because they thought they found all of Yates’ victims. Fin is confident that she was killed by Yates. Olivia isn’t certain that is the case, because the victim has red hair and isn’t Yates’s type. She thinks there may be a copy-cat killer.

Upon further investigation at the lab Olivia and Rollins learn that the victim was raped, and her skull was fractured. The lab technician says that the murder lines up with Yates’s MO – but she was dismembered with surgical precision, and Yates never chopped up his victims. Rollins heads to prison to talk to Yates, he insists he wasn’t the killer and that someone is “piggy-backing” off from his crimes. He thinks it is fascinating that the killer ever painted the victims’ nails green, just like his victims. Yates says that he will “stew on it for a couple day,” and then he might have some information for her.

They run DNA on the victim and learn that her name was Brooke Groves, Carissi and Olivia head to her house – they are shocked by how nice it is. A woman answers the door and says that she is Brooke Groves, but she got married and now her last name is Norwalk. She reveals that she has a twin sister named Rachel, and she hasn’t talked to her in years – her husband didn’t want her around the kids because she had a drinking and drug problem. They take Broke to the morgue to identify her sisters’ body and she breaks down in tears.

Carissi and Fin head to a halfway house where Rachel was staying – the woman on duty said that she hasn’t been there in a few months. An older woman with gray hair came and picked her up, they thought that she was Rachel’s mom – but Rachel’s mom is dead. The timestamp on the security video is off, so they aren’t even sure what date the woman took her.

Fin and Rollins pay Yates another visit in prison. Yates tells them that back in 2002 he went to stitch up a guy in his townhouse and gives them the address – he says that a woman with red hair was hurt there by another doctor. They head to the house, which has had two new owners since then. They use a thermal computer and realize that there is a skeleton hidden inside the wall of the house. The body was crammed inside a suitcase and appears to be mummified. According to the autopsy report from the lab, there was no green nail polish, however the skull was fractured like Yates’s victims.

Olivia and Rollins head back to the prison, Yates insists that he didn’t kill the woman in the suitcase. He says he does know who killed her, and he will tell them once they give him a conjical visit with his fiancée. Olivia gets the visit approved, and after they get time alone Fin and Carissi chat with his fiancé. She reveals that she knew the victim too, and her name was Lena Grunwald. Yates says that the man that killed her was named Carl Rudnick – who just happens to be a deputy chief medical examiner for New York state. Yates is certain that Rudnick must have fudged the autopsy reports.

Olivia and Carissi question Yates’s fiancée abut Carl and Lena – she was good friend with Lena. She says that Lena sent her a letter saying that she had to get away and went home to Switzerland. There was a picture of her in Switzerland, so she didn’t think that Lena might be dead. But, she says that Lena and Carl used to fight relentlessly and she was scared that Carl might kill her.

Rudnick has no idea that the cps are on to him, and he just delivered an autopsy on his dead fiancée Lena. They have another examiner named Melinda come in to the morgue to re-examine Rachel and Lena’s body. They learn that Rudnick’s timeline is off – he gave them the wrong date of death. And, he neglected to tell them that Rachel was dismembered prior to death, she was still alive when the killer began butchering her. They are able to confirm with dental records that the victim in the wall was indeed Lena’s.

Olivia sits down with Rudnick to question him, he confirms that his aunt owned the house where Lena was found. He confirms that he and Yates went to medschool – he says that Yates must have set him up and killed Lena because he was jealous of his success and he always like Lena. Meanwhile, Carissi and Rollins are searching Rudnick’s house. They find a secret room full of womens’ clothes – they recognize one of the outfits from the security video of Rachel leaving the halfway house. Rudnick had dressed up as the gray-haired woman. They arrest Carl for Rachel and Lena’s murders, and cuff him and take him away. Rudnick posts $2 Million bail and is released until trial.

They checked Lena’s passport and it says that she flew to Switzerland – they check airport security footage from 2002, and it looks like a woman dressed in drag. They need to see the photo and letter that Yates’ fiancé Suzy received from Lena after she left. They head to Suzy’s house bought she is gone – and there is blood smeared inside her house. Suzy’s body washes up on the beach, and she has been gutted and dismembered.

Olivia and her team rushes to Rudnick’s house to search it again, but his lawyer won’t let them in the house. Rudnick hasn’t been spotted since 8:00 PM last night – it looks like he killed Suzy and then left town. Rollins wants to go back to prison and talk to Yates and let him know that Suzy is dead. Olivia tags along with her, and they question him about the photo that Suzy had of Lena. Yates is devastated though, he reveals that he thinks Suzy was pregnant with his baby.

They run Rudnick’s bank records and realize he was using a fake alias under the name of Theresa Fish. They head to Theresa’s apartment and find that someone was murdered there, there is dried blood on the floor and knife marks from where something was cut up. They get a phone call from upstate New York and learn that the police have located Rudnick dressed in drag on a bus. Rollins and Carissi fly to Syracuse to arrest Rudnick.

While Rollins and Carissi are driving Rudnick back to the police station, Olivia locates his car – he abandoned it near the airport but he left in a hurry and there is still blood in the car. Rollins and Carissi stop with Rudnick at a café. While Rudnick is in the bathroom, Carissi overhears him talking to himself in the stall – he doesn’t seem to be sane.

Barba is freaking out, he is afraid that if Rudnick is convicted of murder – then Yates’ case will be thrown out. He sends Rollins to talk to Yates alone at the prison, he needs more evidence to convict Rudnick. Rollins heads to the prison, while she is talking to Yates he tells her that he knew that Suzy was pregnant because she smelled different. Then Yates reveals that Rollins is pregnant too, she smells just like Suzy did. Rollins is shocked, but what Yates is saying lies up with her throwing up at the crime scene that morning. Rollins heads home and takes a ton of home pregnancy tests – they are all positive, she is really pregnant.

It’s time for Rudnick’s arraignment, everyone heads to court – Olivia takes the stand and confirms that the body on the beach was Suzy’s. Rudnick’s lawyer argues that Suzy was on a mission to clear her fiancé Yates’s name, and that she framed Rudnick for the crimes to try to get him out of prison. Court doesn’t go well, afterwards Rollins corners Olivia outside and lets her now that she is pregnant. She insists that the baby is not Nick’s baby though. Olivia warns her that she is going to get pout on restrictive duty.

They head back in court, and the other medical examiner (Melinda) takes the witness stand. She verifies that the blood found in the home matches Suzy and Rachel’s blood. The defense tries to discredit Melinda, he points out that she lost the chief position to Rudnick – and she could be upset because she lost the position to him.
After recess Dr. Rudnick takes the witness stand – he insists that Suzy attacked him with a knife and he killed her accidentally in self defense. Rudnick demonstrates his fight with his lawyer, and even has self-defense wounds on his hand. Barba argues that the self-defense wounds could have been done by himself.

After court, Barba is scared that the jury is going to let Rudnick off. Rollins and Carissi spend the night going over all of the evidence to try and find a smoking gun that will make the jury convict Rudnick without a shadow of doubt. Carissi finds a video of Rudnick in Barba’s office, he is pacing around in circles waiting for his lawyer – he talks to himself and confesses to the murders out loud and tries to calm himself down and convince himself that he isn’t going to get arrested.

In the morning they take the taped confession to the judge, in curt Rudnick has no choice but to confess to Suzy and Rachel’s murders.