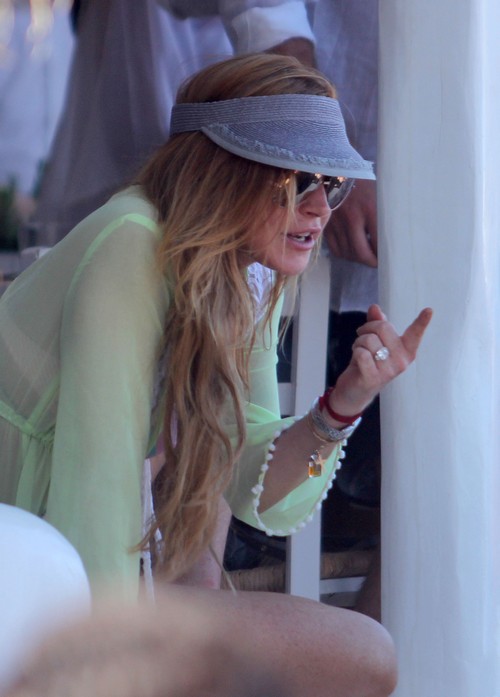 Lindsay Lohan made quite the splash while vacationing in the Greek Isle of Mynokos, the troubled former child actress seems to be a hot mess – regardless of what continent she is on. Lohan reportedly dined and dashed at a high-end Greek restaurant with a group of friends, and stiffed the angry restaurant manager $1300! Pretty sure that could be considered grand larceny where Lindsay comes from, but hey when has a felony ever stopped her?

According to the latest edition of Life & Style Magazine, Lindsay and a group of her friends arrived at the Sea Satin restaurant in Mynokos and began going to town on the most expensive dishes they had to offer, and they loaded up on shrimp and lobster. Everyone was all smiles until the $1300 bill was dropped off at the table – and then Lindsay and her friends dashed out of the restaurant without paying it!
An insider dished to Life & Style, “Everyone including Lindsay split without paying. After the restaurant spent three frantic days trying to track Lindsay down, one of her friends returned to the restaurant to pay up.” So, either they all assumed Lindsay was a baller and she was paying the bill and she thought vice versa, or Lohan was inebriated and literally forgot to pay the bill. Then again, maybe this is one of those cases where Lindsay thought the meal was on the house because she was a celebrity, Sea Satin might give out dinners to famous folks for free – but Lindsay Lohan apparently doesn’t make the criteria for their idea of a celebrity. Regardless, Sea Satin got their money so we can all sleep well at night.

Do you think that Lindsay intentionally tried to skip out on the bill, or was it all just a big misunderstanding? Let us know what you think in the comments below!

Lindsay Lohan’s celebration vacation continues as she parties with friends in Mykonos, Greece on July 20, 2015. Lohan has been traveling around Europe to celebrate finishing her community service and finally getting off probation for the first time in eight years. FameFlynet