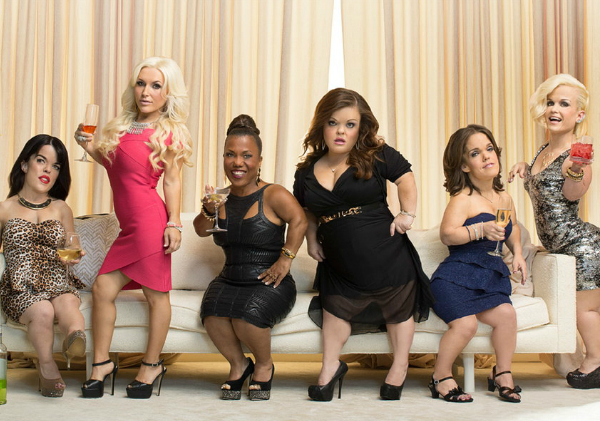 Tonight on Lifetime Little Women LA airs with an all new Wednesday, January 28, season 2 episode 5 called, “Stage Fight,” and we have your weekly recap below. On tonight’s episode, on the heels of a major fight at the bonfire, Terra focuses her attention away from the girls and on to her brother Bourn, who is coming to visit.

On the last episode The Triple T’s weren’t as tight as they used to be, as Traci and Tonya began to questioned Terra’s loyalty. And when Traci got the news she’s been dreaming of, she struggled with whether or not to tell her best friend Terra. Hoping to change her luck with men, Briana took a chance on a guy she met online. But when he flied in to stay with her for a week, will her parents think he’s taking advantage of her? And when Christy threw a barbeque, some of the secrets she’s been spreading around the group come back to slap her in the face. Did you watch the last episode? If you missed it we have a full and detailed recap right here for you.

On tonight’s episode as per the Lifetime synopsis, “on the heels of a major fight at the bonfire, Terra focuses her attention away from the girls and on to her brother Bourn, who is coming to visit. But when Terra reveals that she’s pregnant, Bourn forces her to tell the one person she’s been dreading the most… their mom! Blissfully in love, Briana confronts her family on why they aren’t willing to meet her new long distance boyfriend. Later, Briana braves the stage to sing for her first time at an open mic night, but will she be able to keep the spotlight when Terra surprises everyone and takes the stage as well?”

Tonight’s episode is going to be a fun one, which you won’t want to miss. So be sure to tune in for our live coverage of Lifetime’s Little Women LA Season 2 Episode 5— tonight at 10PM EST!

The confrontation between Terra and Christy got ugly long before either of them could address the root of their problems with each other. And so on tonight’s episode of “Little Women: LA”, argument like these have not only finally gone too far but more than one friendship might ended up getting caught in the crossfires.

The argument, as it first began, was simply between Terra and Christy. Terra was upset at the other women for crossing the line and nearly ruining her friendship with Traci. And for what?

The only reason Christy tattled on her and was willing to hurt Traci in the process is because she likes to stir the pot. So if ever there was someone that could have intervened in this particular fight – it should have been Traci and not Christy’s husband Todd. Todd had inserted himself into the argument (that had nothing to do with him by the way and was between women up to this point) and he escalated things by speaking quite rudely to Terra.

He called her this and that. And somehow he managed to justify insulting someone (if only to himself) by saying “well, she’s not being a lady to begin with” or “I’m protecting my wife”. Yet, the verbal abuse spewing from his mouth was so bad that the other men at the bonfire had to actually step in. Traci’s own husband told Todd to back off and that he shouldn’t be speaking to a woman like that.

But Todd refused to listen to anyone other than his wife and after she had enough of being yelled at she told him they should just go. Although, technically, they were the hosts of that bonfire gathering and really it was their party so they could have stayed (and cry) if they wanted to.

Yet, despite that, no one missed them when the couple. Briana quickly followed them in leaving but she did that more out of embarrassment than anything else. That gathering was supposed to be a way for her to introduce her friends to her boyfriend and said friends quickly ruined it by getting into a fight.

So, yeah, Briana left in a hurry. And that’s because she wanted to savage some of her night with a guy she doesn’t get to see in person all that often.

But, as it turns out, Briana didn’t have to worry about her friends. At least that point anyways seeing as she later had to deal with meddling family members. Apparently everyone, from her parents to her siblings, are hesitant about her new boyfriend. They don’t appear to trust him and that don’t want Briana getting involved in something she can’t handle.

But, as it turns out, Briana didn’t have to worry about her friends. At least at that point anyways seeing as she later had to deal with meddling family members. Apparently everyone, from her parents to her siblings, is hesitant about her new boyfriend. They don’t appear to trust him and they don’t want Briana getting involved in something she can’t handle.

It seems Briana’s parents ordered a background check on Matt and they found out he had been arrested for assault. So they told their daughter this hoping she would end the relationship but she didn’t to do that. Instead she talked to Matt about the arrest and she’s choosing to believe him when he said it was all a misunderstanding.

Matt makes her happy and so for now that’s enough for her. No matter what other people may say.

And that’s why Matt has inspired her. Briana wrote a song for him and she worked up courage to sing a snippet of the song in person. So she called in all her friends to come and support her. Yet her performance felt somewhat flat.

Though Briana has a nice voice, many of her friends don’t believe she has the stage presence she needs to hold an audience. And that became even more obvious when Terra took the stage right after Briana had finished. While Briana faltered, Terra was confident as she began singing her song and she kind of one-up her friend.

So it wasn’t that surprising that Briana was upset afterwards. She felt like Terra couldn’t even give her her one moment. And though Terra hasn’t had it easy recently with telling her family about her pregnancy (her mother was more worried about her daughter than she was excited about a grandchild) – that still doesn’t excuse the fact she hurt a friend and then acted childishly when Briana told her she was hurt.

Briana had tried to leave the club but Terra kept trying to tell her that what she did wasn’t a big deal. Especially as Briana had wrote her song in the car while she was driving to the club. Right away Terra felt like that meant Briana’s big night must not have been as important to her as she’s now making out to be. So she tried to tell Briana to get over it and that was completely the wrong thing to say.