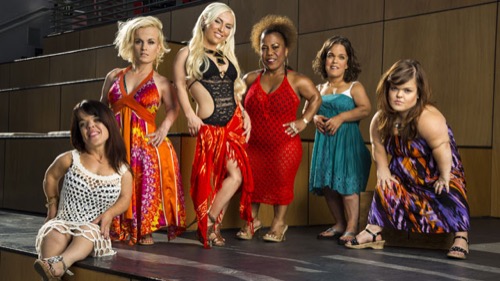 Tonight on Lifetime Little Women LA airs with an all new Wednesday February 18, season 2 episode 8 called,“Into the Woods.” On tonight’s episode, Terra treats the gang to a fun filled weekend on Catalina Island, but the news that they’ll be roughing it on this vacation turns half the group into extremely unhappy campers.

On the last episode After Tonya’s “Used-Date Party” ended in a nasty brawl, the women tried to pick up the shattered pieces of their friendship. Christy, Briana and Lila brought the girls together for a fun 5k race, only to insult Terra and Tonya, igniting another blow-up. Lila threw a cocktail party to make peace, but got a frosty reception from everyone. Did you watch the last episode? If you missed it we have a full and detailed recap right now for you.

On tonight’s episode as per the Lifetime synopsis, “Terra treats the gang to a fun filled weekend on Catalina Island, but the news that they’ll be roughing it on this vacation turns half the group into extremely unhappy campers. The ladies’ sense of adventure is soon revitalized by a thrilling day of zip lining, and they reward themselves with a fancy dinner in town. But their meal ends with a bitter taste, as Lila, fed up with the girls, viciously lashes out at each of them.”

Tonight’s episode is going to be a fun one, which you won’t want to miss. So be sure to tune in for our live coverage of Lifetime’s Little Women LA Season 2 Episode 8— tonight at 10PM EST!

Todd asks Christy if she’s not nervous about going to Catalina with Terra and Joe after the blowup.

Christy wants to believe that Tara is willing to put all this behind her, she says in confessional, but she just isn’t sure. She tells her husband that if it gets bad they’ll come home.

Joe tells Terra he can’t go on the trip because he’ll be filming a medical commercial for two days. He tells Terra that Todd isn’t going to do anything.

When everyone is ready to leave for Catalina, Terra tells the others that Joe isn’t coming because he has to film a commercial. Todd says “coward,” under his breath, but Terra chooses to ignore it.

Terra announces to the other women that they will all be camping during this trip. When Tonya asks how many tents they have, Terra says they will have “community tents.”

All of the women complain as they walk up to the communal tents, especially Traci, who complains about the beds and then doesn’t engage with the others.

Christy pulls Lila aside to support her in her recovery from alcoholism. Christy also brings up Joe, saying she knew Lila wanted him to come. She asks Lila if she was seeing Joe when he was dating Terra, and she says it does sound bad because Joe made it clear when he wanted the relationship between them to stop, but she held onto hope. Christy confronts her on the fact that Lila told her she hadn’t texted Joe for two years, but a text from two months ago came to light. She asks Lila if she possibly sent a drunk text two months ago, saying she wants to know the truth in case she needs to back her up. Lila denies it.

Elena complains about the camping because she got surgery, saying she didn’t choose to be here.

When the women go to start a campfire, Traci chooses to stay behind and finish eating.

Later at the campfire, Terra says they will all go ziplining tomorrow, and Traci says she refuses to do it. Terra says sometimes she needs to enjoy life as it is, and when Traci says she does what she wants to do, Tonya calls her selfish.

Terra asks Traci and Tonya how they feel after the situation last night, and Traci says she felt ganged up on.

Briana says she imagined being able to put two of the cots together so that she should sleep with Matt and look up at the stars.

Matt shows up later, along with Elena’s man. It turns out that Christy invited him so the ladies can see what he’s all about.

The group goes ziplining. First, they each must be weighed because there is a weight limit of 240. Todd weighs 250. Also, Terra is advised not to go as she is pregnant. Then, they must practice reaching handlebars which are above their heads while they are strapped in, which is a struggle.

Briana goes first, and when she reaches the end of the line, her body appears to be flinging around violently in the air like a rag doll. Traci immediately refuses to go along with it upon seeing that.

Todd tells Terra that he and Christy thank her for this trip, and he apologizes, saying he is not only sorry but embarrassed by his actions. He says it embarrasses him to know his mother was looking down on him as he did that.

Terra says she does want to put everything behind them, but she felt especially hurt because they weren’t attacking anyone but her. He also apologizes to Tracy, who got knocked over during the fight.

Terra says in confessional that she is glad he has apologized and thinks it’s genuine, but they’ll see what happens and he needs to apologize to Eric and Joe.

When Todd goes back to tell Christy he apologized, she says he was defending her because she was being attacked. Terra is overhearing this conversation when she tells Tonya what’s going on. She says it makes her feel exactly how she felt to begin with because they don’t care about anyone other than themselves.

At dinner, Lila says she enjoyed the trip even though it was tense at times.

Christy tells the other women about her and her husband looking into in vitro fertilization (IVF).

Traci says in confessional that she’s been trying to do IVF for a while now, and Christy is copying her.

Christy apologizes to Terra for anything she and Todd may have said to her, saying that she wants to start fresh. She says in confessional that she and Terra will always be frenemies because they’re similar, even though Terra is sluttier.

Terra tells her it hurt to overhear her conversation with Todd in the tent. Christy starts to say that what they say in the tent is between them, but Terra interrupts to say that they were screaming.

Christy denies saying that he shouldn’t have apologized, saying she told him he was happy that he did.

Traci jumps in to say that she also heard it, and that Christy did sound very upset at Todd for apologizing. She says that her tone of voice was loud and upset.

Lila says as an outsider that people are basically ganging up on Christy, and when she starts pointing at people, calling them out, they get offended.

She tells Tonya she is chilly as the Arctic, and Elena that she can barely understand her and that she is in her own little world. Tonya tells her “look at you,” and Lila starts imitating her, telling her to kill her.

Terra tells Lila she should remember not to put fingers in Tonya’s face after what happened at the 5k.

Tonya calls Lila “fake” and “phony,” saying she came out here to get with Joe. Lila, however, says she doesn’t want that “beady eyed bastard.” Tonya says the minute he saw her, he called her a jump off and other names. Terra tells her to enjoy life as a whore.

When Christy suggests to Lila that they leave, Tonya tells Christy to take her home and never come back.

Lila says Terra dragged Joe out of his relationship and is a homewrecker.

Meanwhile, Briana is worried about this drama putting off Matt.

As everyone leaves the restaurant, the drama between Tonya and Lila continues. Lila asks Tonya why she is in her face when she’s trying to walk away, telling Tonya her breath smells and that she looks ridiculous in her heels and can’t even walk in them. “Take your thirsty ass back to New York,” Tonya says.