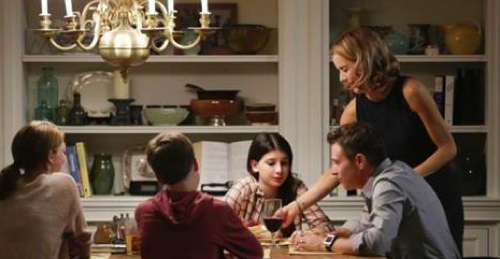 Tonight on CBS Madam Secretary airs with an all new Sunday November 29, season 2 episode 9 called, “Russian Roulette.” and we have your weekly recap below. On tonight’s episode, Elizabeth (Tea Leoni) prepares to deliver a speech to the United Nations that blames Russia for the attack on Air Force One.

Madam Secretary  is an American political drama television series created by Barbara Hall and executive produced by Lori McCreary and Morgan Freeman. It stars Téa Leoni as Elizabeth Adams McCord, a former CIA analyst and college professor who is promoted to United States Secretary of State.

On the last episode, as tensions rose with Russia, Elizabeth, Russell and Mike B. hatched a plan to oust National Security Advisor Craig Sterling without tarnishing President Dalton with a scandal; at the same time, Director of National Intelligence Ephraim Ware identified who hacked Air Force One. Did you watch the last episode? If you missed it, we have a full and detailed recap right here for you.

On tonight’s episode as per the CBS synopsis, “Elizabeth prepares to deliver a speech to the United Nations that blames Russia for the attack on Air Force One, but then Henry shares information that makes her seriously reconsider this theory.”

Tonight’s episode of Madam Secretary kicked off with the blackout in Russia. Maria Ostrov is furious – she video calls President Dalton, and threatens him. She shouts that Russia will not stand for this. President Dalton hints that “IF” the United States did attack Russia, it was in response to them hacking Air Force One. Maria Ostrov scoffs that Dalton is insane, and Russia never attacked Air Force One. Elizabeth is concerned about Maria’s threats, Dalton and Jackson laugh them off – they think that Maria Ostrov is all talk.

Elizabeth heads home and Henry is fixing dinner for the kids. Elizabeth’s son is not having a good night – he is nervous because his football coach is starting him tomorrow and the playoffs are on the line. He doesn’t want to be humiliated and let the whole school down – he is under a lot of pressure. Alison jokes that Jason won’t have anything to be worried about – because according to the news Russia will attack them before tomorrow’s game. The kids leave and Elizabeth and Henry start arguing over what they can and can’t say to each other about Russia.

Henry is upset, he storms out of the house – he visits his handler and asks her what she knows about the attack in Russia, neither of them have heard from Dimitri, they don’t know if he made it out of the US. Henry tells her that the US caused the blackout in Russia, they thought it was Russia who attacked Air Force One. Henry thinks that the President made a mistake, Dimitri sent them their entire military attack plans – and there was nothing in the plans about Air Force one. He thinks that the President should see the report Dimitri sent them ASAP.

Meanwhile, Maria Ostrov is not playing games – she shuts down three pipelines that supply 40% of Western Europe’s fuel. Now, Europe wants to break the alliance with the US so that they can get feul from Russia. President Dalton tells Elizabeth that it is time to retaliate, he wants to “hit Russia hard.” Elizabeth convinces him to let her talk to the United Nations first – she thinks she might be able to avoid going to war, if she convinces the UN that Russia was “bullying” the US and the Ukraine. Elizabeth starts rallying the US’s allies for support – she calls Mikhail (the Ukraine President) and asks him for any evidence he has on Russia’s attack on his plane.

Elizabeth meets with her team and fills them in – she tells Matt that she needs the “speech of her life.” She is going to have to convince the entire United Nations that they should all be willing to go to war against Russia to stop their military over-reach and aggression.

Henry interrupts Russell Jackson while he is having lunch – he tells Russell that Dimitri got Russia’s entire playbook, and it didn’t mention the Air Force One once. Russell is furious, he can’t believe that Henry is telling him this now, while they are in the midst of going to a possible war against Russia. Henry begs him to stop engaging with Russia, but Russell says that it is too late. He threatens Henry and tells him that if he is sharing any of his intel with Elizabeth – they will both be thrown in to prison for the rest of their lives. Henry completely disobeys Russell and he goes home and tells Elizabeth that he doesn’t think that Russia attacked Air Force One. He confesses that he got his information from his asset Dimitri.

Time is winding down before Elizabeth’s big speech to the UN, she talks to Oscar and he confirms that it is possible that it wasn’t Russia that attacked Air Force One. Elizabeth’s team is prepping her for her speech, she breaks down and confesses to them that she think Russia might not be responsible for the attack on Air Force One. Jay talks Elizabeth through the George Lasko poisoning – Matt has a theory, he thinks that China might have attacked Air Force one and framed Russia to escalate problems between US and Russia. Matt is a little disappointed though – if he is right about China, then that is going to mean that she won’t be reading the speech that he just wrote to the US.

Elizabeth calls Ambassador Chen in to her office right before she is set to read her speech to the United Nations – she flat out asks him if China is responsible for the attack on Air Force One. Chen scoffs that it would be foolish for China to pit Russia and the US against each other – they have over 20% of their nation’s money invested in both countries. Russell shows up at Elizabeth’s office, he is furious, he knows that she is having cold feet about her speech to the UN. She explains to him that she wants more information so she can be sure – Russell orders her to get on Marine One, the President is waiting for her. A few hours later Elizabeth arrives home from work, Henry is confused, apparently she skipped out on the speech and never met with the United Nations.

The next day Elizabeth heads to work – Daisy sends the day fielding phone calls from the press about Elizabeth cancelling her speech at the UN. Meanwhile, Elizabeth and Jay have a new theory – they recall last month when Ukraine’s president Mikhail Bozek was begging the United States to stop Russia. They think that Bozek might have framed Russia, and attacked his own plane to convince the US to attack Russia. Elizabeth pays her frienemy Craig Sterling a visit at his house, he visited Bozek right after his plane crash, Elizabeth quizzes him about the crash – he reveals that everyone was fine and Bozek just had a minor scrape on his face.

Elizabeth heads back to the office where her team has been working all night to try and find evidence that Bozek framed Russia. They find out that Bozek changed his passenger list on the plane at the last minute, and filled the plane with former Ukraine officers who all are professional paratroopers. Nadine also found a recent Ukraine officer who died of Polonium poisoning right after Lasko’s death. Elizabeth and Jay meet with the president and fill him in on their findings, proof that Bozek framed Russia and he is the real person behind the Air Force One attack.

Elizabeth and President Dalto meet with Bozek, he confesses that he was the culprit behind Air Force One, the US has already “attacked” Russia with the cyber grid and they don’t want to have to admit that they were wrong all along. They are pulling all of their troops out of Ukraine – but they are going to keep Bozek’s secret. Dalton threatens Bozek that if he breaths a work of it to anyone, he will send him somewhere no one will ever be able to find him.

Elizabeth heads home to check in on her family, then she receives an emergency phone call from President Dalton. She rushes to the White House, Russia has made a power move and they have violated the UN’s no fly zone and are currently en route to the Ukraine. President Dalton gives the military “permission to engage” with Russia.