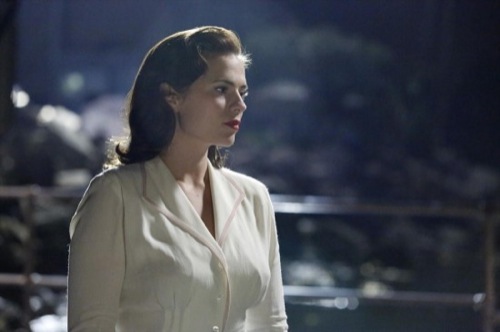 Marvel’s Agent Carter premieres on ABC with an all new Tuesday January 6, season 1 episode 1 premiere episode called “Pilot; Bridge and Tunnel”. This new show was created by creative genius Joss Whedon, the man behind Buffy The Vampire Slayer and Marvel’s The Avengers. On tonight’s episode, Howard Stark is framed in the opener of this action-adventure series based on characters from Marvel Comics. Later, a deadly weapon falls into enemy hands.

For those who don’t know about the show, the series features the Marvel Comics character Peggy Carter, with Hayley Atwell reprising her role from the film series, as she must balance doing administrative work and going on secret missions for Howard Stark while trying to navigate life as a single woman in 1940s America. Several characters from Marvel Cinematic Universe films appear throughout the series. It is produced by ABC Studios and Marvel Television, with Tara Butters, Michele Fazekas, and Chris Dingess serving as showrunners.

On tonight’s episode as per the ABC synopsis, “sixty-five photos of national landmarks suddenly surface, all featuring the evil symbol. Meanwhile, a college student claiming to be an operative breaks into the White House. The 7th floor team works to figure out the identities of the picture takers as the hunt for Al Moosari continues. Charlie (Katherine Heigl), now in Yemen, desperately tries to make contact with her asset while evading the Yemeni secret police. Nick’s (guest star Chris L. McKenna) masked captor lets him go only to lead him to his next mission. Back at Langley, Lucas (Adam Kaufman) takes the lead on the interrogation of a potential, and very controversial, member. At the same time, President Payton (Alfre Woodard) must make a hard choice between getting a much-needed win or holding out for her long-term goal of killing Sheikh Hakam. Sheila Vand, Tommy Savas, Cliff Chamberlain and David Harbour also star. Guest starring Nestor Carbonell, Melinda McGraw and Anil Kumar. TV-14 LSV.”

Tonight’s series premiere of Marvel’s Agent Carter looks like it is going to be great and you won’t want to miss it. Make sure to tune in for our live coverage of ABC’s Marvel’s Agent Carter at 8:00 PM EST! While you wait for our recap hit the comments and let us know how excited you are for this new series!

We all wanted to know what happened to Peggy Carter after she lost her first great love Steve (Captain America) at the end of WWII and now out questions will finally be answered during tonight’s premiere of “Agent Carter”.

Subsequently, after the war, Peggy as it turns out was not one of those women to fall apart after a tragedy. If anything, she appears to have become even more committed in righting the world’s wrongs. Hence, she went to work for a secret government agency called the SSR but sadly the guys there never realized her potential.

Not that surprisingly, the 1940s wasn’t really a time for women empowerment. And so rather than use Peggy for her intellect and years in the field – the agency that hired her actually the audacity to write her off as nothing more than Steve’s sidepiece and thereafter they basically treated her as a glorified secretary. So you can say Peggy was in something of rut when she suddenly was approached by Howard Stark.

Howard was a great asset in the war but afterwards he had hard time convincing congress that he wasn’t supply intel to the enemies. It seems some of his designs were stolen and whoever did so then tried to sell it on the black market.

So when Howard had initially approached Peggy, she was at first weary about trusting what used to be a good old friend of hers. On one hand she wants to believe him when he says he’s still a patriot but he’s also asking for a lot when he says he needs her help to prove it. Apparently, the only way Howard can clear his name is to have Peggy possible commit treasonable acts.

It’s the SSR, the agency Peggy is working for and has committed herself to, that are looking for evidence to put Stark in jail. So what Stark is actually asking her to do is to spy on her own people. And, funnily, Peggy didn’t have that hard of a time in doing so.

From the start, she was apprehensive but the more her coworkers tried to write her off as some silly little woman – the stronger her resolve became. And after that it was basically a stroll through the park. The agency didn’t try to hide information from a woman they believed was inferior.

And as a result of that stupidity, Peggy was able to get her hands on all the info she needed.

She then used up one of her sick days by implying it that time of the month (something all men seem to fear no matter the era) and went work by going undercover. Luckily, she ended up beating the SSR to the a nightclub they were looking into and from there she got a hold of one weapons Howard was so worried about.

All it took was low revealing dress and a wig. And with that she escaped notice and got a hold of a very dangerous and glowing weapon. But her luck eventually was worn up. Because soon after she returned to her apartment, she discovered her roommate’s murdered body.

A gunman had followed her from the club and he also stayed after killed her roommate. So Peggy was left with no other choice than to fight him off. Even if such disturbance did end up drawing suspicion from the SSR.

Though, some early preemptive measures saved her from getting hauled in by her own agency. Peggy hadn’t put her name on the lease and frankly the only person that knew her, as in her name, was her now deceased roommate. So although she was admittedly cocky when she first started the mission for Howard – she wizened up.

Peggy had her chance to walk away and she chose not to take it. Instead she was going to finish what she started with Stark and work alongside his trusted butler Jarvis.

The weapon everyone wanted to get their hands was actually a bomb that had an impact to rival the atomic bomb. Thus it was imperative for Carter and Jarvis to trace whoever has been selling copycats of the original Howard design.

But despite their best efforts, all they got was a name. And it wasn’t even something they recognized.

Yet a start was a start. And by supplying a name, Peggy proved herself to both Jarvis and Stark because now they want her to join their team!

In part II of tonight’ two hour premiere, Peggy got caught up in looking for a place to live. Her last living situation was compromised during part I but when the opportunity came for her to live in a high rise – she just couldn’t see herself living there.

Peggy didn’t want to take Howard up on his offer to stay in one of his apartments because she thought it would look suspicious. Yet she also didn’t want to live with a roommate seeing as her last one was murdered because of her. And, well, New York doesn’t really offer that much to the picky.

So, ultimately, Peggy is going to have to bend on something and in the meantime she simply staying for a “few” nights at Stark’s apartment. It’s the least he could do seeing as she’s working on proving his innocence.

Though, her job keeps getting that much harder thanks to the much larger and darker forces at play. Recently one of Stark’s rivals had an explosion happen at his industrial factory. And while no one knows the cause of it – naturally they all suspect Stark.

The explosion itself was unusual but the aftermath, where everything in the factory stuck together like it had been pulled magnetically, could only have been done by someone with Stark’s capabilities.
And the SSR are right to believe that whatever caused the explosion was invented by Stark, but they’re wrong if they think Stark, himself, had anything to do with it. It’s the shadow thieves that blew up that factory and Peggy was even a witness.

She had tried to prevent the explosion and unfortunately she only managed not blown up Jarvis.

So when her agency started to look into the explosions – Peggy was nervous. She was afraid their investigation would lead back to her and helping Stark as an excuse wouldn’t have been enough to save her from prison. That actually might be just was the agency needed to take down Stark once and for all!

Consequently, Peggy had to be really careful about how to point the SSR in the right directions without giving herself away. She had recognized one of the culprits as a worker for Mr. Hughes. And from there she had to make him look guilty.

However, getting justice wasn’t as easy as she thought. Because she could only push the SSR so far. And even though they caught a man – their suspect proved to be reluctant.

He wouldn’t turn on his men nor would he provide information to the location of the truckload of Stark’s little devices. And Peggy couldn’t exactly tell anyone she knew a truck existed. So she knew she handled what come next on her own.

Though Jarvis did come in handy. Their investigation, which as it turns out is more fast acting than the SSR’s, brought them to the truck but then an ensuing fight left behind bodies and an explosion. And those things draw attention.

The SSR were quickly on the scene but all they found was a woman’s footprints and the key to a hotel room. Neither of which can be linked back to Peggy. You see she end up going back on her word. Originally, she said she didn’t want friends or support but then she met Jarvis and he convinced her not to distance herself from the world.

So she took a chance. And she also took a room not that far from a young waitress that’s slowly been earning her trust.

Peggy will still be focused on her mission but now she’s no longer going to sacrifice her life to do so. Though, while she was helping Stark, she incidentally left behind piece evidence that could be traced back to him.