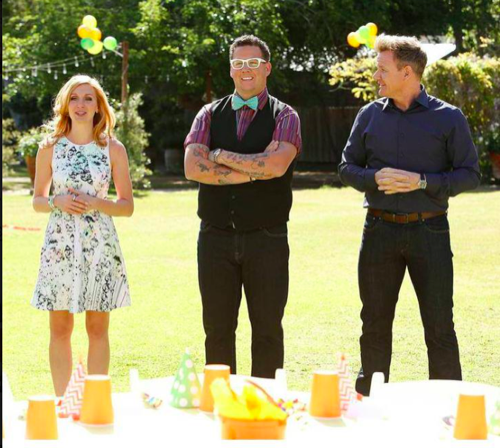 Tonight on FOX Gordon Ramsay’s Masterchef Junior continues with an all new Friday December 4, season 4 episode 5 called “Happy Birthday,” and we have your weekly recap below. On tonight’s episode, the cooks leave the kitchen for a team challenge to make food for a birthday party for kids ages 8-13, and the invitees include the Ramsay and Elliot children. The winners are safe from elimination, while the losing group compete in a pressure test involving the French dessert croquembouche.

On the last episode, the remaining 18 junior home cooks faced their first team challenge of the season and the first-ever MASTERCHEF JUNIOR team relay race. Each team had to create a large serving of seven-layer dip. The team that completed the dip first were safe from the next elimination challenge, and chose the smelly, wrinkly or spicy ingredients for that challenge. Find out who smelt their way to victory and who dipped lower in the competition. Did you watch the last episode? If you missed it we have you covered with a full and detailed recap right here for you.

On tonight’s episode as per the Fox synopsis, “the remaining junior home cooks will party their way into the next team challenge when they leave the MASTERCHEF JUNIOR kitchen for the first time to cook at a birthday party for kids ages 8-13, as well as special guests, the Ramsay and Elliot children. The team that receives the most votes from the birthday party attendees will be safe from elimination, while the losing team will compete in the next pressure test and create the French dessert croquembouche.”

Don’t forget to join us for our live recap tonight at 8:00pm when Masterchef Junior season 4 episode 5 airs on Fox. While you wait for the recap, let us know how you are enjoying this season of MasterChef Junior.

Thirty miles northwest of the Masterchef Kitchen, the remaining sixteen contestants were given their first ever team challenges.

Subsequently, the contestants were asked to cook a menu consisting of three items (turkey burgers, fish tacos, and chicken wings) for well over seven tables of kids. It was pretty much six birthday celebrations all rolled into one at Calamingos Ranch and the kids cooking for them had to remember that they were going to be cooking for their own age groups. As well as both Gordon and Graham’s children who weren’t going to be officially judging but whose opinion mattered to the judges.

However because tonight’s team challenge was their first ever, the kids were bound to need guidance and sometimes team leaders aren’t the best people to provide that. Take for instance Nate. Nate and Addison had been chosen as team captains based on their performance last week. And while Addison’s Blue team rose to the occasion under her guidance, Nate’s Red team floundered for a bit.

Truth be told he seemed to be overwhelmed by his positon and had actually began yelling when the red team kept trying to talk to him all at once. So luckily Ramsay stepped in and he talked to Nate about getting his kitchen under control. And that was more than enough for Nate to get it together.

But over at the blue team’s kitchen, Addison’s steady leadership began to fall apart when it was revealed her food choices all had been seasoned to be spicy. She made spicy fish, spicy chicken wings, and the burgers weren’t any better seeing as someone mentioned sriracha sauce for one or more of those dishes. Therefore Graham had to run interference and tell Addison that if her team’s food was too spicy then the kids she was cooking for were just going to go over to the Red team.

And so Addison had her people quickly ease back on the spice. Kaitlyn who was cooking the fish stopped to wipe off the old seasoning and simply replaced it with salt, pepper, and olive oil. Plus they turned the sriracha sauce into a side dipping option rather than smothering any one dish in it.

Thus it wasn’t a surprise when Addison’s Blue team won the challenge. Her team did after all only make two mistakes on the fish meanwhile Nate’s team had overcooked a bunch of chicken. And that later came back to bite them when they had to hand over plenty of empty chicken baskets that meant a major loss in points.

Yet the Blue team didn’t just have a bad day on the challenge. They had to return to the MasterChef Kitchen and take part in this season first pressure test. And unfortunately the judges made it a hard one by demanding croquembouche.

Croquembouche is pretty much a high end crème puff but it requires more than one cooking technique. First the kids had to cook the proportionally right size of balls of dough and then they had to focus on both the crème fulling as well as the decadent caramel sauce. So that was three things they needed to pay close attention to all at once.

And, well, Nate wasn’t getting the right amount of dough so it looked like his croquembouche was actually going to be on the smaller side. Though he wasn’t the only one that struggled. Ian had also burnt his caramel sauce. Caramel is pretty tough to cook and once burned it takes on a bitter taste. So Ian had to start again with a couple of minutes left up on the clock.

But when it came time to judge, it was clear who was in the bottom. Nate had gone on to burn his caramel sauce so his dish was considered one of the worst. And then there was Derek who was so busy racing to finish that he didn’t even check if to see if he had been fully cooked. Which had been a problem for Amaya as well. However Ian’s croquembouche while looking nothing like croquembouche wasn’t the worst.

So on tonight’s episode of “MasterChef Junior”, Sam’s croquembouche won the night but he and the remaining contestants all had to say goodbye to both Nate and Derek.