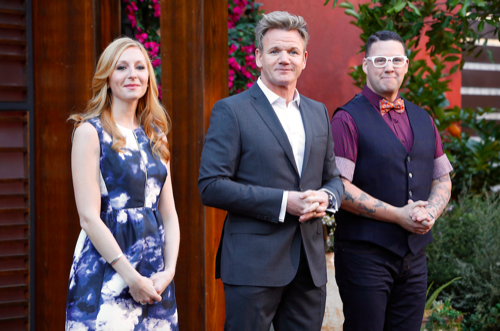 Tonight on FOX Masterchef returns with an all new Wednesday May 20, Season 6 Premiere called, “Top 40 Compete; Top 22 Compete.” On tonight’s episode forty chefs present their signature dishes to the judges for a chance to compete for a cookbook deal and a $250,000 grand prize in the Season 6 premiere.

On tonight’s episode per say the FOX synopsis “in the Season Premiere episode, 40 of the best home cooks in America will travel to Los Angeles to present their signature dishes to the distinguished judging panel: Gordon Ramsay, Graham Elliot and new judge Christina Tosi. The judges will taste for flavor, creativity and presentation. In order to move to the next round, the home cooks must have an immense passion for food and be determined to out-cook their rivals in a series of head-to-head battles to earn a coveted white apron and compete for a chance to win the MASTERCHEF title, a cookbook deal and the $250,000 grand prize.”

Don’t forget to join us for our live recap tonight at 8:00pm when MasterChef Season Five on Fox airs. While you wait for the recap, let us know how you like the fifth season of MasterChef and who are you rooting to win tonight.

Tonight’s season premiere of Master Chef kicks off with Chef Gordon Ramsay and Chef Elliot greeting the top 20 Home Chefs – they introduce this season’s new judge, celebrity chef Christina Tosi. After Christina says hello to the chefs, Gordon Ramsay announces that he has a surprise. 20 more home chefs march out on to the stage. This season they selected 40 home chefs – and they will have to compete in a head to head battle to see who will be in the Top 20, and who will be going home.

The first Battle for the Apron will be between Claudia, a single Latino mother, and Andrew, a political fundraiser. Andrew and Claudia will each be preparing a shrimp dish, Andrew plans to make his shrimp dish with some Southern flair. Chef Ramsay puts 30 minutes on the clock and Claudia and Andrew begin racing around the kitchen. When the 30 minutes is up Chef Ramsay, Chef Elliot, and Chef Tosi line up to taste both their dishes. Christina isn’t impressed with Claudia’s presentation, but they like the garlic flavor that she used. Andrew’s shrimp & grits falls short with Chef Ramsay, he says that they are rubbery and overcooked – but the other chefs enjoy the flavor. After careful consideration the judges announce that the winner of the apron is Claudia, Andrew is eliminated and going home.

Tommy and Stephen are facing off in the next Battle For The Apron. Tommy is a flamboyant fashion designer, and Stephen is a 47 year old home gardener. Tommy and Stephen will both be cooking a pork dish – they have 30 minutes on the clock. Tommy gets to work on his pork valentine, Stephen is working on a stuffed pork wrapped in bacon. It’s time for the moment of truth, the judges line up to taste their pork dishes. Tommy’s dish was raw and he had to reheat it, but Stephen’s steamed vegetables were hard as a rock and uncooked. After tasting the dishes the judges announce that the winner of the apron is Tommy, Stephen is eliminated and sent home.

The next Battle For The Apron will feature four chefs – two of them will receive aprons and two of them will go home. Nate, Derrick, Amanda, and Manita will each be cooking their own lamb dish for the Master Chef judges. Chef Ramsay puts 30 minutes on the clock and the four chefs begin racing around the kitchen. Nate gets to work on a mushroom crusted rack of lamb and a cauliflower puree. Derrick is busy crusting his rack of lamb with pistachio. Now, it’s time for them to present their lamb dishes. Derrick’s is a hit – Chef Elliot raves that it is the best dish they have had in the competition so far. Manita’s lamb falls short, Chef Ramsay informs her that it is still raw. The judges announce that Derrick and Amanda are getting aprons and moving on in the competition, that means that Nate and Manita are eliminated and going home.

Katrina and Taylor will be competing in the next Battle Of The Apron, both of them are hailing from Milwaukee, Wisconsin – and will be preparing a salmon dish. Taylor is currently a college football player, but dreams of being an executive chef. Chef Ramsay puts 30 minutes on the clock, Taylor is preparing his signature dish – blackened salmon with pineapple salsa. Katrina is searing her salmon, and shocks the chefs by adding curry to her dish, which is a bizarre choice for fish. Time is up and the judges taste Taylor and Katrina’s dishes. Christina raves over Taylor’s salmon and says that he clearly has potential. Chef Ramsay is not impressed with Katrina because she can’t remember if she put jalapeno in her salmon. He says the flavor is great – but she should know what she puts on the plate. After careful consideration the judges announce that the Master Chef apron is going to Katrina, that means Taylor is eliminated and going home.

Hetal and Jill are up next, they go head to head preparing fruit dessert dishes. Chef Ramsay sets the clock for 30 minutes, Hetal gets to work on an apple pie with an Indian twist. Jill prepares one of her family’s traditional Christmas dishes – a Dutch pastry with peaches. Hetal’s caramelized apples are a huge hit with Christina, but Chef Ramsay says that he thinks it is “too safe.” Jill’s Danish Aebelskiver is a hit with the judges, Chef Ramsay gushes that it is “really delicious.” Both Jill and Hetal put forth a strong effort, but the judges decide to give the Master Chef apron to Hetal – Jill is eliminated and sent home.
There is only one place left I the Master Chef kitchen, Shelly – a single mom from Brooklyn, will be competing against a restaurant manager from California named Christopher. Chris and Shelly head to the kitchen to prepare their signature chicken dishes. There are 30 minutes on the clock, Shelly decides to tap in to her roots and put a Jamaican twist on her chicken. Chris decides to go for a sweet and sour twist, and begins working on chicken scaloppini. It’s time for the judges to taste the dishes, Shelly’s escovitch wasn’t cooked exactly the way the judges would have wanted it, Christina says that it is “underwhelming.” Chef Ramsay says that Christopher’s chicken has good flavor, but he can’t just drop salad on top of a plate and expect it to all come together. It’s time for the judges to decide which chef will be moving on in the competition, they give the apron to Christopher, and Shelly is sent home empty-handed.

The Top 20 Master Chefs have been selected, they file in to the kitchen where Chef Ramsay, Chef Elliot, and Chef Tosi are waiting for them. The chefs announce that they are going to give the 20 chefs that were eliminated one last chance to win a Master Chef apron – they are going to give out two more aprons. Chef Ramsay reveals that only 6 chefs out of the 20 will get a second chance. They call up the following contenders: Taylor, Stephen, Andrew, Demetria, Jill, and Shelley.

The six chefs that are getting a second chance to win an apron make their way to their stations in the kitchen. Chef Ramsay announces that for their final competition they will be working with “basics,” and a staple pantry box. They each have an hour to use as many of the basic ingredients to prepare a dish for tasting.

Sixty minutes is put on the clock and the chefs begin getting to work. Taylor busies himself preparing some smoked chicken with cayenne, and then he plans to caramelize it. Demetria stuffs her chicken with bacon, and then prepares a chocolate sauce and Chef Ramsay is shocked that she plans to put the chocolate on the chicken with some cheddar cheese. Jill makes blueberry barbecue sauce to put on her chicken legs, Shelly is busy frying a mushroom cheese puff. Stephen reassures Chef Ramsay that he will cook his vegetables and won’t serve them raw this time around.

Time is up – it’s the moment of truth. The remaining six chefs present their dishes to the judges. Andrew brings up his stuffed chicken thigh first, Christina is impressed with his creamed greens – but she thinks that there is too much going on with the vegetables on his plate, he could have done without the carrot puree. Chef Ramsay, Chef Elliot, and Chef Tosi rave over Jill’s seasoning in her chicken. Shelley shocks the judges by not serving a chicken dish, and just crunchy chicken skin in her mushroom puffs. Demetria is up next, Chef Elliot is unimpressed with her chocolate sauce and says that it looks like a “shit stain on a plate.” Christina thinks that Demetria took the second chance that they gave her and threw it away.

Now, it’s time for the judges to reveal which of the 6 chefs will be receiving the final two aprons. After careful consideration they announce that the final two winners of the night are Shelly and Stephen – they come forward and get their aprons and get in line with the other top 20 chefs.