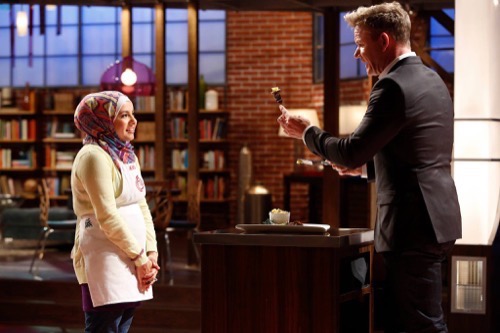 Tonight on FOX Masterchef returns with an all new Wednesday June 24, Season 6 Episode 6 called, “Bring Home the Bacon,” and we have your weekly recap below. On tonight’s episode, an elevated breakfast dish is created by the cooks, but they only have 45 minutes to do so, and the winner gets extra credit in addition to having immunity in the next mystery box challenge, which involves making TV dinners.

On the last episode, in the second field challenge of the season, the home cooks took a surprise trip to Las Vegas, where they were split into two teams to take over Drai’s Nightclub and feed 101 Las Vegas performers. The team who received the most winning votes from the Las Vegas performer diners was safe from the next pressure test, while the losing team would dealtwith a deuce steak contest at Gordon Ramsay’s Steak. In the pressure test, the home cooks faced two steak challenges testing temperature and taste, and one contestant was sent home for good. Did you watch the last episode? If you missed it, we have a full and detailed recap right here for you.

On tonight’s episode per the FOX synopsis “in the next challenge, it’s proven that Breakfast is indeed the most important meal of the day when the home cooks are each tasked to create an elevated breakfast dish in 45 minutes. Not only will the winner have immunity in the next mystery box challenge, but they will also receive two additional advantages. Later, in the mystery box challenge, contestants must create TV dinners. Find out who will go home and who will bring it home”

#MasterChef begins with the judges coming into the kitchen then the home chefs. The top 16 are faced with a mystery box. They lift their boxes and see bacon, berries, eggs and other breakfast fare. Derrick is thrilled. Christina says they have a breakfast mystery box. Graham says this should be a refined restaurant quality breakfast dish and they have just 30 minutes to prepare it. Then Gordon stops them and says there’s an extra station with another mystery box.

Gordon says they will all get to cook with one of the greatest chefs in America – Graham Elliot. The chefs are excited that Graham is cooking with them. Graham says he’s going to make three dishes, one for each of them. Gordon says the winner gets a huge advantage. The #GrahamMysteryBox starts now. Christina says the home cooks can learn from Graham and Gordon says it’s all about the organization. Graham says he’s doing English breakfast for Gordon, French toast for Christina, and a healthy dish for himself.

Gordon says Nick’s sounds amazing and is doing sweet and savory. Graham is cooking away and says he’s fine. They have just 90 seconds last and Gordon tells them to speed up. Graham is up first with his three. He makes smoked salmon scramble for himself, stuffed French toast for Christina and English breakfast for Gordon. Olivia says Graham is like a legend with his three dishes. She says he has the technique and the time management down the way none of them do.

Christina and Gordon rave about Graham’s dishes. They take one last look before they choose the top three standouts. Gordon says the first of the best three dishes is Nick. He made french toast with berry compote, deviled egg with bacon and syrup, then sausage with asparagus and mushroom. Gordon says he’s not a fan of sweet at breakfast but says it worked and says it’s all delicious and is glad he’s not playing safe and says it’s a standout.

Graham is next and asks what berries he used and he says blackberries. Graham loves how acidic it is and says the technique is there. Nick says he wants to open a bar in San Diego. Christina tastes and says she loves it but the egg is a bit sweet and that’s not for her. She says overall, it’s a great job. Graham then calls down the next dish and it was cooked by Katrina. She made blood sausage, mushroom and asparagus frittata with a stuffed tomato.

Christina says it’s amazing and says she likes that the French toast isn’t too sweet and says it’s nicely balanced and he’s a leader in the competition. Gordon tastes and says it’s great. The judges talk and then Gordon says the winner who will join them in the pantry is Derrick. He’s thrilled to win an advantage finally. Derrick now gets an advantage in the elimination test. Graham says he doesn’t have to cook tonight and he’ll choose what the others cook.

Christina says not every family has the time to prepare dinner every night and sometimes they have to pull out a TV dinner. Christina says salisbury steak with broccoli and mac and cheese is her guilty pleasure. Graham shows his favorite TV dinner is meatloaf with mixed veggies and red potatoes. He says it was a staple. Gordon says the first TV dinner produced was turkey and gravy, green beans and mashed potatoes. They each have a funny photo on the box.

Derrick is told to choose a TV dinner for the other home cooks to prepare. The judges bring out the cloche while Derrick heads upstairs. Christina says he doesn’t have to cook and he also got to choose the #MCTVDinner they will all make. The other cooks laugh and Veronica is thrilled. She says she’s been eating TV dinners for 59 years. Christina reveals and says he chose her favorite salisbury steak with mushroom gravy, mac and cheese with broccoli.

Olivia says she doesn’t even know what salisbury steak. They only get five minutes in the pantry. Claudia says she loves it and her mom would give them the dinners when she had to work. Hetal gives her standard line about her being a vegetarian. Graham calls them to a stop and says he has a surprise. They tell Derrick he can target one home cook. He says he can pick one cook who has to stand and watch for 15 minutes before they can start cooking.

Derrick chooses Christopher and he’s upset. Christina says he has to leave everything in his basket. Derrick says he’s a strong cook but knows he’ll take it personally and it will mess with his head. Gordon says the mac and cheese is huge and they wonder how they will elevate the dish in the time they have. Nick is making salisbury steak meatballs like his grandma used to make. Olivia is making meatballs too and mac and cheese with bacon.

Shelly is making hers Jamaican style with some heat. Christopher is down to his last 60 seconds. Gordon says he only has 45 minutes and will really have to focus. He gets to work and the others cheer him on. Jesse tells Gordon he’s doing venison salisbury steak with fried mac and cheese and pickled broccoli. Veronica tells Christina she needs to work on her presentation. She says she’ll make it like a TV dinner and Christina asks if she heard them say to elevate it.

Veronica says they will say it’s awesome and Christine tells her presentation, elevation then moves on. Gordon talks to Hetal and says she’s doing Tandoori spices and she’s allergic to mushrooms so she can’t include those. Gordon says she can have someone else taste it. Gordon tells the others he’s worried about Hetal. He says he’s also worried about Jesse and the venison since it can get dry. Christopher sets his food on fire then they’re down to the last 10 seconds.

Christopher is first and he didn’t have time to taste and re-season. He says he made a beef and lamb salisbury steak slider. Gordon says he wants to take 15 minutes of his time every time and says it was beautiful. Graham says the mornay sauce is spot on and the flames made it taste good. Christina says she loves the mac and cheese and says he needs to write Derrick a thank you note since it was a good learning experience.

Hetal says her dish looks like ass and she’s embarrassed. She hopes she’ll trip and fall so they don’t have to eat it. She says she made Tandoori spiced salisbury steak and says she knows she screwed up everything. Gordon says it’s depressing. He says the mac and cheese is watery and her broccoli should have been perfect. He asks if she’s given up. Hetal says she doesn’t want to leave and says the beef freaked her out so much she didn’t focus on the others.

Gordon says they’ve had other vegetarians make the top five or 10. He says she may be going home. Olivia is next with her mini meatballs and her bacon mac and cheese. Christina tastes and says she likes it and says it’s a punch of flavor. Shelly brings up her Jamaican salisbury steak with creamy crunchy three cheese mac. Graham tastes and says the seasoning is Jamaican him crazy. He says it’s really really good. Next is Veronica.

She says she made traditional salisbury steak, 10 cheese mac and cheese and says it’s a hungry man dinner. Gordon says she missed the objective. He says it was supposed to be elegant and it looks like King Kong’s kitchen. He says the told her to refine things down. He pours water out of her broccoli. He says he’s done and it’s a mess. He says she’s not getting the point and cooks like she’s at a Vegas buffet and it’s three compartments of puke.

He says it’s like sawdust in his mouth. Jesse says it’s dry but not that dry and that’s venison. Gordon says it doesn’t work and says when it turns to bright white, it’s dry. Gordon says there were two stand out dishes. Graham says Nick and Olivia are both safe and will be team captains for the next challenge. Then Christina says they have bad news and calls down the first of the three losers – Hetal. Graham says the other loser is Veronica for not listening.

Gordon then says the next person knows who it is and Jesse doesn’t move so Gordon says Jesse, get your ass down there. Graham tells Veronica she consistently falls into the bottom of the pack and says she’s going home. She says she’s proud that she’s the oldest competitor ever in MasterChef. She says her grandkids love to eat her cooking and she can’t wait. Gordon says they’re down to the top 15 and tells them to give themselves a hand and says great job.

He says the bad news is they’re sending another home right now. They’re all shocked and Gordon says Hetal has hit a stumbling block and then says Jesse acts like a petulant teenager. Gordon says Jesse is going home. Hetal gasps because she was sure it was her. Gordon says disappointment in food tastes awful. He says he’s sad to be leaving but has made friends, learned to cook a lot of things and learned from three great chefs. He says he hopes he made his family proud and wishes the others luck.