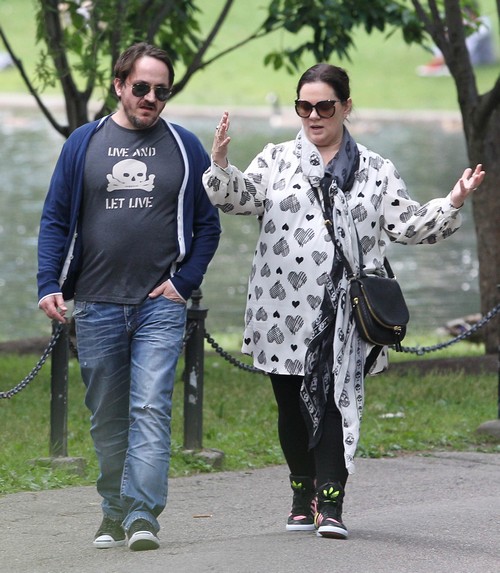 Is Melissa McCarthy on the verge of a $145 Million divorce from her longtime husband Ben Falcone? Melissa McCarthy recently lost over 50 pounds, and the actress has been proudly boasting her new bod at red carpet events. Everyone is thrilled by Melissa’s weight loss – that is except for her husband Ben, who is afraid that other men are going to take notice and steal her away. Ben’s fears sound a little silly, but his and Melissa’s marriage was reportedly already in trouble before she began losing weight – so it isn’t entirely impossible that his nightmares could become a reality.

Melissa McCarthy and Ben Falcone tied the knot nearly two decades ago, long before any one had ever heard of the Bridesmaids actress, ad before she began building her multi-million dollar fortune. Both Ben and Melissa were aspiring actors – but Melissa clearly got a much bigger break than her hubby did and has been far more successful. That alone put some strains on their relationship, coupled with the fact that she is the main bread winner in the family. Melissa and her husband Ben worked together on her recent film “Tammy,” and according to National Enquirer they were fighting the entire time on set.

An insider dished to National Enquirer, “Melissa and Ben fought over that project [Tammy]. She wanted to go in a different direction, but Ben was determined to make the movie the way that he wanted. There was a lot of head-butting.” Apparently, Melissa and Ben took their work problems home with them, because after the movie was done Melissa confessed that she had been crying a lot. When asked in an interview how she had lost so much weight, McCarthy strangely responded that she had “cried away the pounds.”

Whenever a woman loses a massive amount of weight, it creates some issues in their marriage regardless off whether they are famous – or a typical working class family. Ben’s insecurities about Melissa’s hot new body, combined with the fact that Melissa is more successful than him and earns more money than him is a recipe for disaster. It’s really a miracle their marriage lasted this long without any issues. Do you think that Melissa McCarthy could be on the verge of a divorce? Or will she and her hubby Ben work out their issues? Let us know what you think in the comments below!