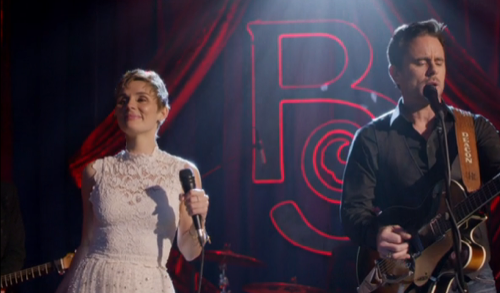 Tonight on ABC Nashville starring Hayden Panettiere continues with an all new Wednesday December 16, special episode called, “On The Record 3 – A One House Music Special,” and we have your weekly recap below for you. On tonight’s episode, Fans of the hit ABC series “Nashville” get a rare and intimate look at life on the road when cameras follow cast members Clare Bowen, Chris Carmack, Charles Esten, Sam Palladio, Aubrey Peeples and Lennon and Maisy Stella.

On The Record 3″ includes cast members’ personal stories about touring and writing, and pulls the curtain back to reveal some of their pre-performance rituals. The music special also features interviews with Steve Buchanan, executive producer of “Nashville”; Lennon and Maisy’s parents, Brad and Marylynne Stella; band leader Colin Linden; and musician Brandon Young.

On tonight’s episode as per the ABC synopsis, “fans of the hit ABC series “Nashville” get a rare and intimate look at life on the road when cameras follow cast members Clare Bowen, Chris Carmack, Charles Esten, Sam Palladio, Aubrey Peeples and Lennon and Maisy Stella, as they tour around the country performing the music of “Nashville” as well as original material they have written, during sold-out concerts. With revealing and heartfelt stories, “Nashville: On The Record 3″ includes cast members’ personal stories about touring and writing, and pulls the curtain back to reveal some of their pre-performance rituals.”

#Nashville starts with Lennon and Maisy Stella (Maddie and Daphne) playing music on their porch with their parents. Charles Esten (Deacon) decides what instruments to bring on the road. Charles takes the stage first and he chats up the crowd before he plays.

Then we see Clare Bowen (Scarlett) singing over a montage of the concert setup. Then we see one of the showrunners talking about the singing chops of the cast. Sam Palladio (Gunnar) talks about the nerves. Chris Carmack (Will) says it’s more stressful going on the road.

Aubrey Peeples (Layla) talks about how she got so nervous she thought she would throw up. Lennon and Maisy talk about how annoying each other are. Maisy says Lennon is obnoxious. Charles says he just paces nervously. We see him take the stage in Philadelphia.

We see Charles and Chris practicing in the bathroom for the good acoustics. A guy comes in, looks, and leaves. Next Chris takes the stage to do an original song. He says he played this in the basement of the Viper Room for 12 people and now gets to play for a sold out crowd.

He says it’s on iTunes and says he sold four copes. He bought one then Jeff, Sam and Colin also bought it. He says he’s killing it. Charles says the producers of the tour told them they can do originals songs as well as songs from the show.

Charles says the fans get to know them as well as the characters. Aubrey says she’s had the opportunity to develop her own sound. Charles says the applause from the crowd makes you want to earn it. We see Lennon and Maisy getting ready to take the stage.

They are on Good Morning America to sing and promote their children’s book. They pose for fan photos. We see Brad and Marylynne, their parents talking about how they were worried about them going on tour. They’ve been on tour themselves before.

They decided to get a bus to drive instead of flying to keep it low key. Marylynne does all their styling and makeup so they don’t have to let anyone else in. She even designs their clothes. The girl talk about wearing Goodwill clothes that their mom alters.

Maisy says their parents put so much effort into keeping their lives normal. Marylynne says watching their kids walk out on stage makes her cry every time they play. She says it’s magical. We see Lennon and Maisy take the stage in Boston.

Brandon Robert Young says he was contacted to sing a duet with Clare. He says they rehearsed it twice then sang it in front of 13,000 people. He says he and Clare started writing songs together and now they’re a couple. She calls him her soulmate.

Clare says having Brandon there is wonderful. She says he keeps her sane on the road and says he’s her best friend. We see Chris and Sam horsing around. They are in Philadelphia jogging up to the “Rocky” steps. They stand by the trophy and make muscles.

They do the whole movie montage while Charles sings “He Ain’t Me.” The Stella sisters also did “Ho Hey” then “Believe” with Charles. Then Sam takes the stage as Clare talks about her social anxiety because she grew up around few people.

Sam sings “When You Open Your Eyes.” We see Clare crying over her dad being there because he came all the way from Australia. She says it’s amazing to sing where country legends have sung. She says celebrity is a silly thing but you should use your powers for good.

Sam comes out to play drums while Charles sings then we hear about Collin, one of the musicians, advising the artists how to play better. Chris says these guys are a great resource and we see Chris and Charles jamming on their guitars.

Charles says the band is unbelievable and says he feels bad about how often they ask them to change up songs at the last minute. We see Chris and Aubrey doing a last minute rehearsal. Then we see a fan calling Charles “Deacon” and being so excited to meet him.

Then we see Charles being interviewed before a concert and he says they love to come out and see the fans. Chris says the Nashville audience is a loyal fan base. We see fans talking about how much they love the show. Sam says connecting with them in live music is amazing.

Chris says he can’t think of another show where you can bring it to fans all over the country. Other fans says they love that they all really sing and are not just playing a part. We see the whole tour group singing “You Will Always Be a Friend of Mine.”

Then we see a group of Nashville fans who connected on Twitter and road tripped to the concert. Another two fans work together and talk about how it’s their water cooler talk. Lennon says it’s great to meet the fans and hear where they’re from and talk to them.

Chris says the fans are so sweet. Charles says there’s a Nashville Nation. Now we see a rehearsal for the encore number. They do “A Life That’s Good.” Charles says a lot of their fans have taken this to heart. Charles, Lennon, Maisy and Aubrey are singing.

Then Chris, Clare, and Sam come out and join them to finish the song. We see them posing for fan pictures and talking with their fans before and after the concerts. The crowd cheers as the song ends. ABC.com/Nashville has the album of the concert available for download.