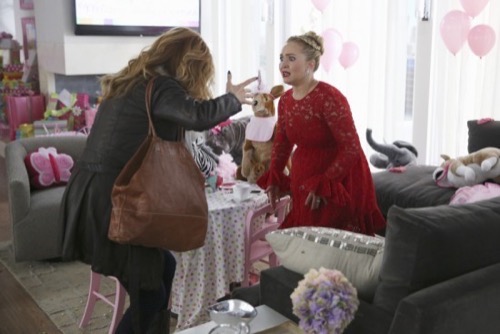 Tonight on ABC Nashville starring Hayden Panettiere continues with an all new Wednesday April 8, season 3 episode 17 called, “This Just Ain’t a Good Day for Leavin’,” and we have your weekly recap below. On tonight’s episode, Juliette [Hayden Panettiere] looks forward to her baby shower filled with celebrity guests, but Rayna [Connie Britton] must back out of hosting it to help Sadie [Laura Benanti] . Meanwhile, rising star Ron Pope courts records deals with both Bucky [David Alford] and Luke; [Will Chase] and Scarlett’s [Clare Bowen] bond with Dr. Rand rattles Gunnar. [Sam Palladio]

On the last episode, Rayna refused to let Deacon wallow in his condition, but her support only frustrated him and pushes him away. Meanwhile, Avery, Gunnar and Scarlett were opening for Rascal Flatts on tour, but, when her past public meltdown haunted her on social media, Scarlett became wary of performing again. Meanwhile, Jeff and Layla continued to blur the lines of business and pleasure, sending Layla into a state of confusion. Will was enjoying his new writing partner Kevin, but hits a bump in the road when Kevin was mysteriously no long available. Then, Sadie found herself in a dangerous situation with her relentless ex-husband. Did you watch the last episode? If you missed it, we have a full and detailed recap right here for you.

On tonight’s episode as per the ABC synopsis, “Juliette is excited about Rayna throwing her a star-studded baby shower, but when Rayna gets pulled into Sadie’s drama instead of hosting, Juliette starts her own mama drama. Bucky and Luke Wheeler both are interested in signing rising singer/songwriter Ron Pope (who guest stars as himself). Gunnar is upset by Scarlett growing closer to Dr. Rand, and Sadie finds a kindred spirit in an old friend”

Tonight’s episode of Nashville kicks off with Luke and Sadie in separate rooms being questioned about the events leading up to Pete’s shooting. Sadie breaks down and tears and begs to make a phone call. She calls Rayna at home where she is having coffee with Deacon, Sadie sobs that she shot her ex-husband. Rayna tells her not to talk to anyone and says she will be right down with a lawyer.

Juliette calls Avery while he is trying to pack up his tour bus and begins rattling off baby names that she has been considering for their daughter – Avery tries to tell her that he is a little busy at the moment. She has a pregnant hormonal breakdown and throws the phone across the room. She rants to her assistant that the table settings Rayna picked out for her baby shower are hideous and begins taking them off the table and throwing them away. On tour Avery and Gunnar are waiting to leave – but Scarlett is running late. Gunnar is obviously upset that she was out all night, when she finally shows up he snaps at her that she needs to set her alarm clock and take their gig more seriously.

At home Teddy receives a blocked all from Tasha. He hisses at her that she should not be calling him, not even on prepaid phones. Tasha cries that she is scared she might not make it out of the country without getting busted. Teddy doesn’t want to hear it – he tells her to lay low and never call him again and then he hangs up on her.

Rayna arrives at the police station with her lawyer Michael Reese, while they are sneaking in the back entrance to avoid the press Rayna runs in to Luke. She asks him what he is doing there – he explains he was with Sadie when she shot Pete. Raya is obviously confused but he says he has been answering questions all night – and he doesn’t have to answer to her too.

Deacon takes Maddie and Daphne out for breakfast – Daphne starts asking what cancer feels like and Maddie has a meltdown – she is sick of hearing about Deacon’s cancer. She storms out of the diner. On the tour bus Scarlett is watching the news with Avery and Gunnar, they are shocked when they hear that Sadie Stone shot her ex-husband. Juliette is getting ready for her baby shower and she learns that Rayna isn’t coming because she is at the police station with Sadie. Juliette screams that she can’t believe that Sadie would shoot someone on the day of her baby shower!

Teddy meets with his private investigator Albert – he has the information that he asked for. Albert scoffs that he is acting just like his father-in-law. Before Teddy can respond he receives a phone call from Maddie – she sobs that she needs him to come pick her up, she doesn’t want to be with Deacon at his house anymore.

At the police station Sadie’s statement is one being filed. The officer in charge warns Sadie that she is free to go, but she can’t leave town – Pete’s death is still being investigated as a homicide and she was in possession of an unregistered gun. Rayna argues that Sadie had a restraining order and it was just self-defense. They head back to Rayna’s house and she makes Sadie a cup of tea – she reassures her that she will be there for her through this. Sadie breaks down and tells her how scared she was of Pete, she needed the gun to make herself feel safer – she never meant to kill him.

Juliette is having a pregnant diva meltdown because no one is coming to her baby shower, she smashed the cake and kicks the stuffed animals across the floor. She screams that no one cares about her or her baby and then orders her manager to cancel the baby shower and call People Magazine and tell them that the party if off.

Teddy shows up at Deacon’s house to pick up Maddie. Deacon meets him outside and tells him that he can’t take Maddie – she needs to be with her real father right now. Deacon and Teddy begin fighting, and then Deacon breaks down and confesses that he has cancer and they just told Maddie last night, that is why she is upset. Teddy heads upstairs to Maddie’s room to try and talk to her – she breaks down and cries and admits that every single time she looks at Deacon all that she can picture is him dying. She begs Teddy to promise her he won’t get sick and die on her until he is really old.

On the tour bus Gunnar asks Avery what he and Scarlett were talking about earlier – Avery admits that Scarlett wanted to know why Gunnar was acting strange towards her. Avery tells Gunnar that he really needs this band to work – he tells him to stop letting his romantic entanglements interfere with their gigs.

Rayna stops by Juliette’s and sees that she cancelled the shower and trashed all of the decorations. Rayna tries to explain that she has had a rough day and she and Juliette wind up in a screaming match over why Rayna doesn’t care about her or her baby. Suddenly Juliette grabs her stomach and whispers that her water just broke.

Teddy leaves Deacon’s house and on his way to his car he runs in to Tasha. He demands to know how she found him and what she is doing there. She sobs that she isn’t going to be safe for much longer and she needs Teddy to get her the money so she can get out of the country.

Maddie finally comes out of the bedroom that she locked herself in all day and she cries to Deacon that she is just so angry. Deacon reassures her that he is just as angry as she is – but she can’t shut him out right now.

Avery learns that he is going to be a father and Juliette is in labor and he abandons Scarlett and Gunnar on tour – they are forced to go up on stage together and play the next concert as a duo, but they aren’t on speaking terms. Gunnar surprises Scarlett and begins playing the song that they wrote together years ago when they were together.

In the hospital Rayna is holding Juliette’s hand while she is in labor and scraming in pain. Avery finally rushes in to the delivery room – and Juliette gives birth to a healthy baby girl. Rayna steps out and gets a phone call from Sadie, she says that the police aren’t filing charges and she is just getting one misdemeanor for having the gun. She tells Rayna that she is going home to Virginia to sort through some stuff – she needs to get right with herself. Rayna understand, she tells Sadie to take care of herself.

Teddy calls Harris in to his office again – he shows him pictures he got from his PI of him with his secret girlfriend and love child. Harris agrees to put through the half a million dollars in funds as long as Teddy doesn’t tell his wife.

After their performance Gunnar chases after Scarlett – he pleads with her and tells her that he felt something on stage with her, there is still something between them. Scarlett scoffs that all she felt was the music.

Sadie stops by the studio to thank Luke, she knows he lied to the police and said he witnessed the shooting and it was self-defense. She cries and hugs him – then tells him that she is leaving town and walks out of the studio.

At the hospital Juliette and Avery bond with their new baby. Rayna finally heads home to Deacon and finds him sleeping on the couch. She thanks him for watching the girls and he heads to his house so that he can change his clothes and take a shower. Rayna heads in to her daughter’s room to check in on them.