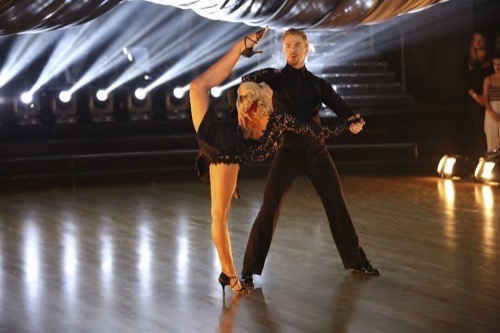 Tonight on ABC Dancing With The Stars returns for a fifth week with when each celebrity competes during the highly anticipated, “Disney Night.” Nastia Liukin and her professional dancer Derek Hough danced a Jazz routine to “Love Is An Open Door” from Frozen.  On tonight’s episode the nine remaining couples will then perform to songs from Walt Disney Animation Studios films including “Aladdin,” “Mary Poppins,” “The Little Mermaid” and “Frozen.”

On last week’s premiere episode of DWTS Nastia performed a Argentine Tango routine and the judges scored Nastia a 34/40 for her performance. Julianne loved her performance and had this to say, “You nailed it in 2008 and you nailed it tonight.”

Judges’ comments: Len: “There was nothing frozen about that dance, you showed us your sunny side and I loved it.” Julianne: “You could do that rendition on Broadway.” Bruno: “You captured the essence of the wonderful world of Disney.” Carrie Ann: ‘Something bothered me, the lip syncing took me out of it.”

Watch the video below and let us know what you think, do you agree with the judges comments? Do you think Nastia did enough to avoid elimination next week? Sound out in the comments and let us know your thoughts?